Yasir Hussain has once again got under the fire of criticism for naming Nausheen Shah an 'Uninvited Guest' on his wedding!

Yasir Hussain has always remained in the headlines following his controversial statements on different occasions. Despite facing much of the criticism, he never holds back when it comes to opening up on different matters. Well… no one commends his way of issuing such statements as they consider it a way of staying in the limelight. Wondering about what’s new at Yasir‘s end this time? So, here we have got the details! 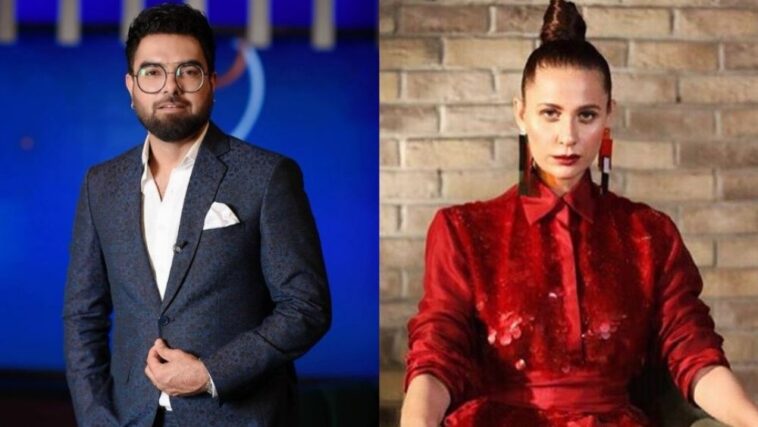 Yasir knows well how to stay in the limelight, however, he never cared if it is all about playing foul in doing so. Well… this time, he appeared in Vasay Chaudhry’s show named “Ghabrana Mana Hai” that goes on-air at ARY Digital.

During his interview on the show, while they were generally talking about Yasir and Iqra’s wedding, Vasay asked something that opened up the way to a new controversy. He inquired whether Yasir and Iqra had any extra guests at their wedding? The question basically indicated that he is asking about those from the industry who were not invited and still showed up on this big day. 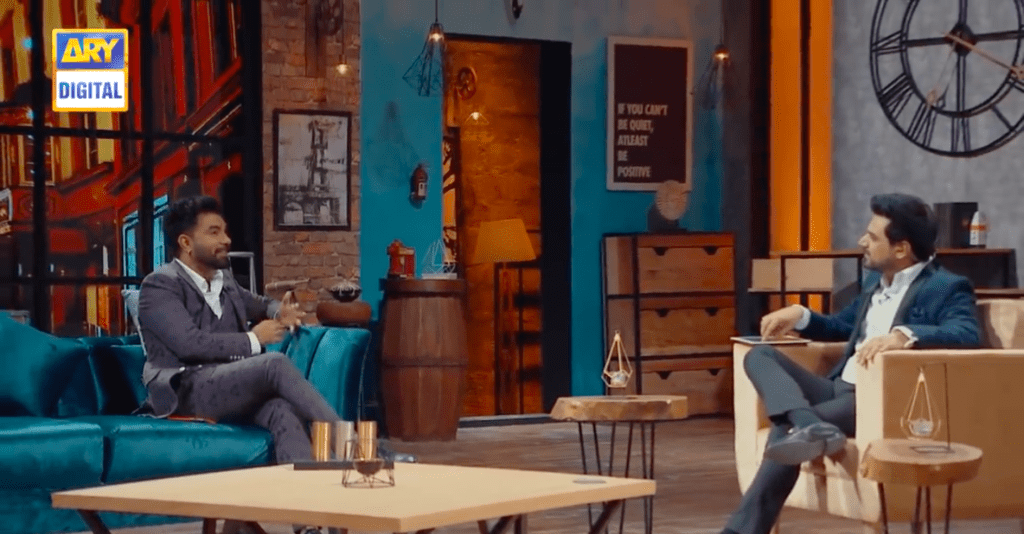 Any guesses what was Yasir’s response? So, Yasir opened up a new controversy by replying that he had not invited Nausheen Shah, but she still came anyway.

The worst part was that they went on to make fun of Nausheen for a few minutes. Vasay added up by saying that maybe Nausheen attended the wedding because she wanted to see what a wedding looks like, as she isn’t married herself.

Yasir and Vasay mocked the actress while saying that maybe after this incident, she will become popular. The audience expressed great disappointment at this act and bashed Yasir Hussain and Vasay Chaudhry. 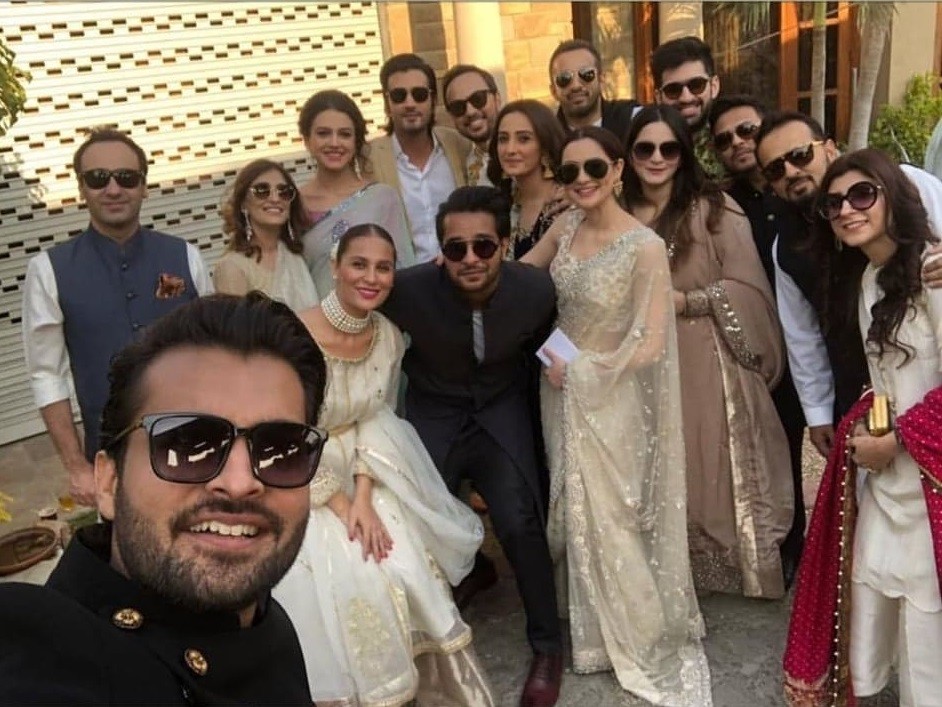 As soon as the video went viral on social media, the fans were expecting Nausheen to respond outrageously. However, she took to a story to Instagram with the caption:

“When you are busy building an empire, you don’t pay attention to nonsense. I am too busy to get distracted.”

When Nausheen was reached out and asked about Yasir’s statement, she said,

“Would anyone go someone’s house uninvited? I wouldn’t go to anyone’s house if I wasn’t invited, let alone going to someone’s wedding.”

“A fool is known by his speech and a wise man by his silence. Yasir called me himself and invited me. I feel so sorry for Yasir because certainly has serious memory issues. I also feel really sorry for Iqra. She is taking one for the team.”

Now Nausheen is expecting from Yasir to apologize her for this false statement during the show.

In response to Nausheen’s statement, Yasir posted detailed note on his Instagram story and here we have got the clicks. Take a look! 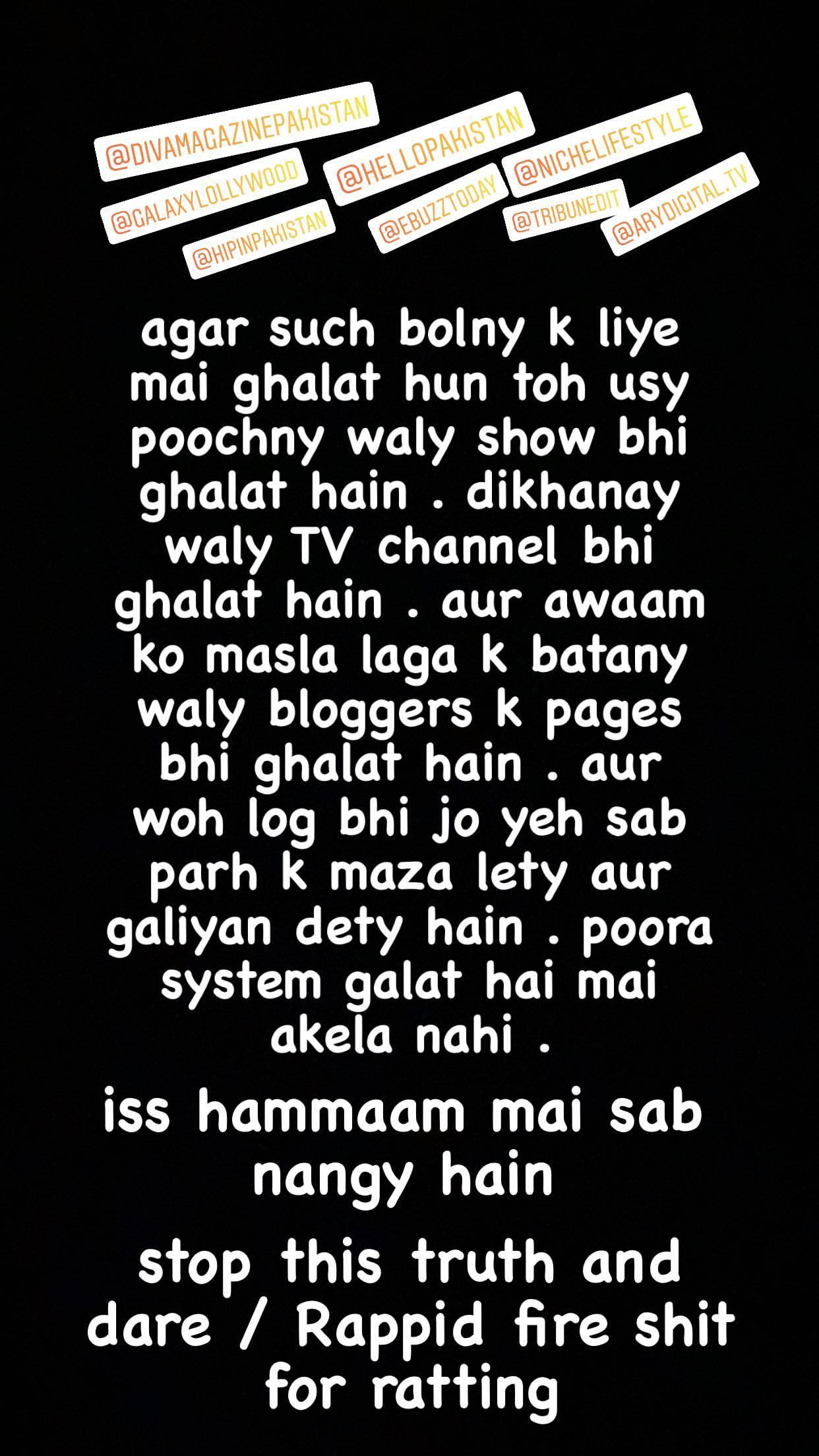 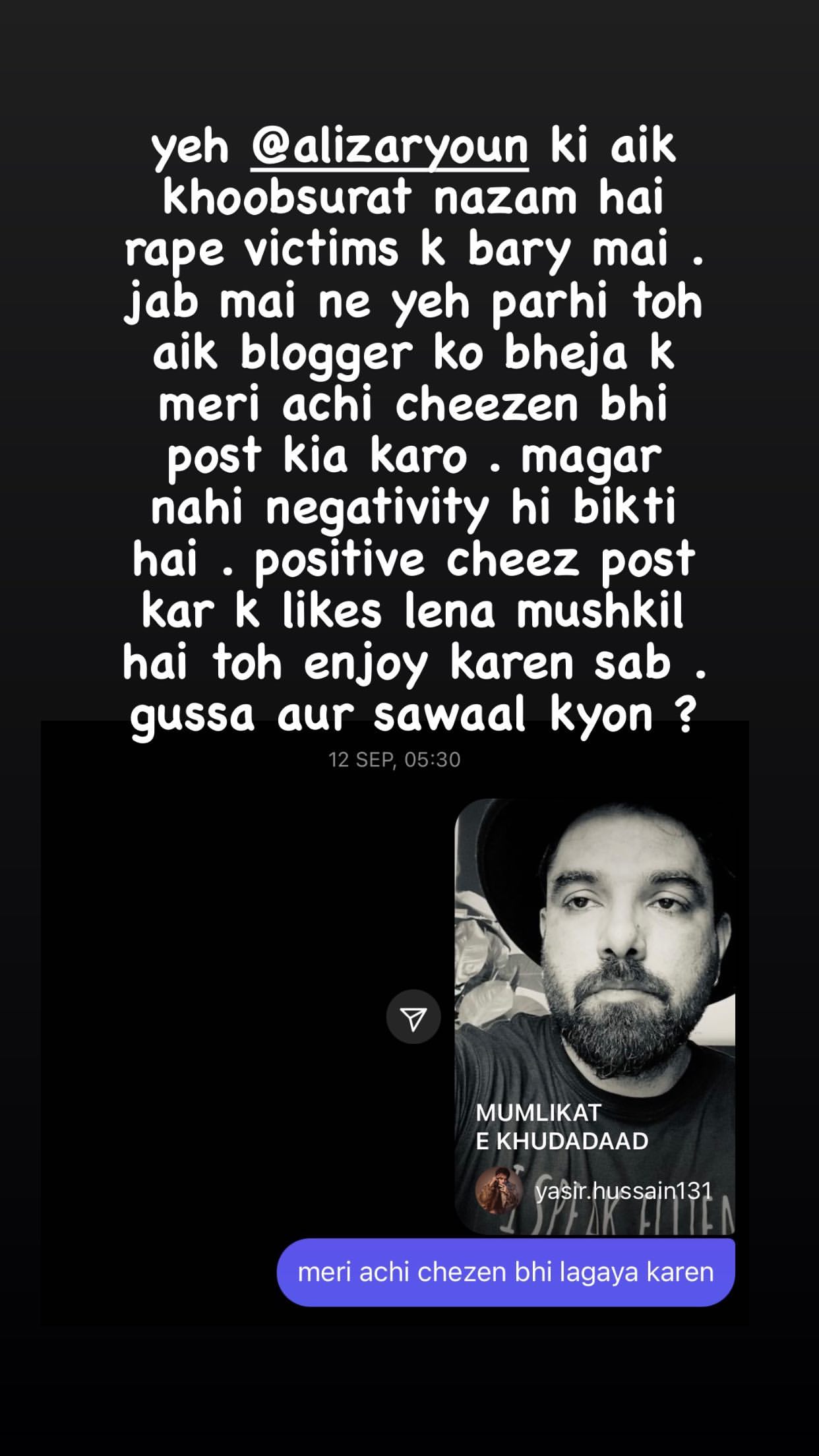 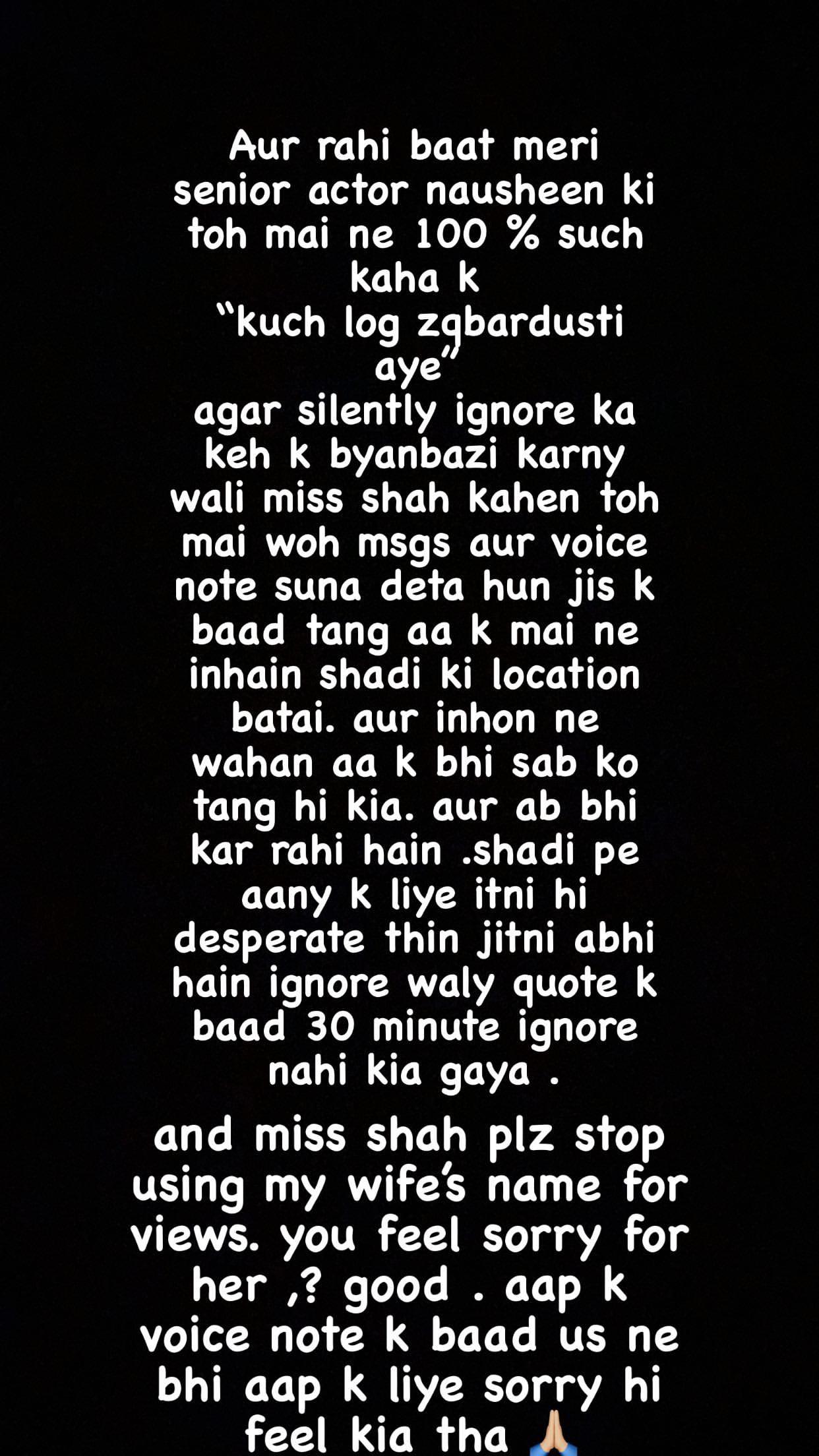 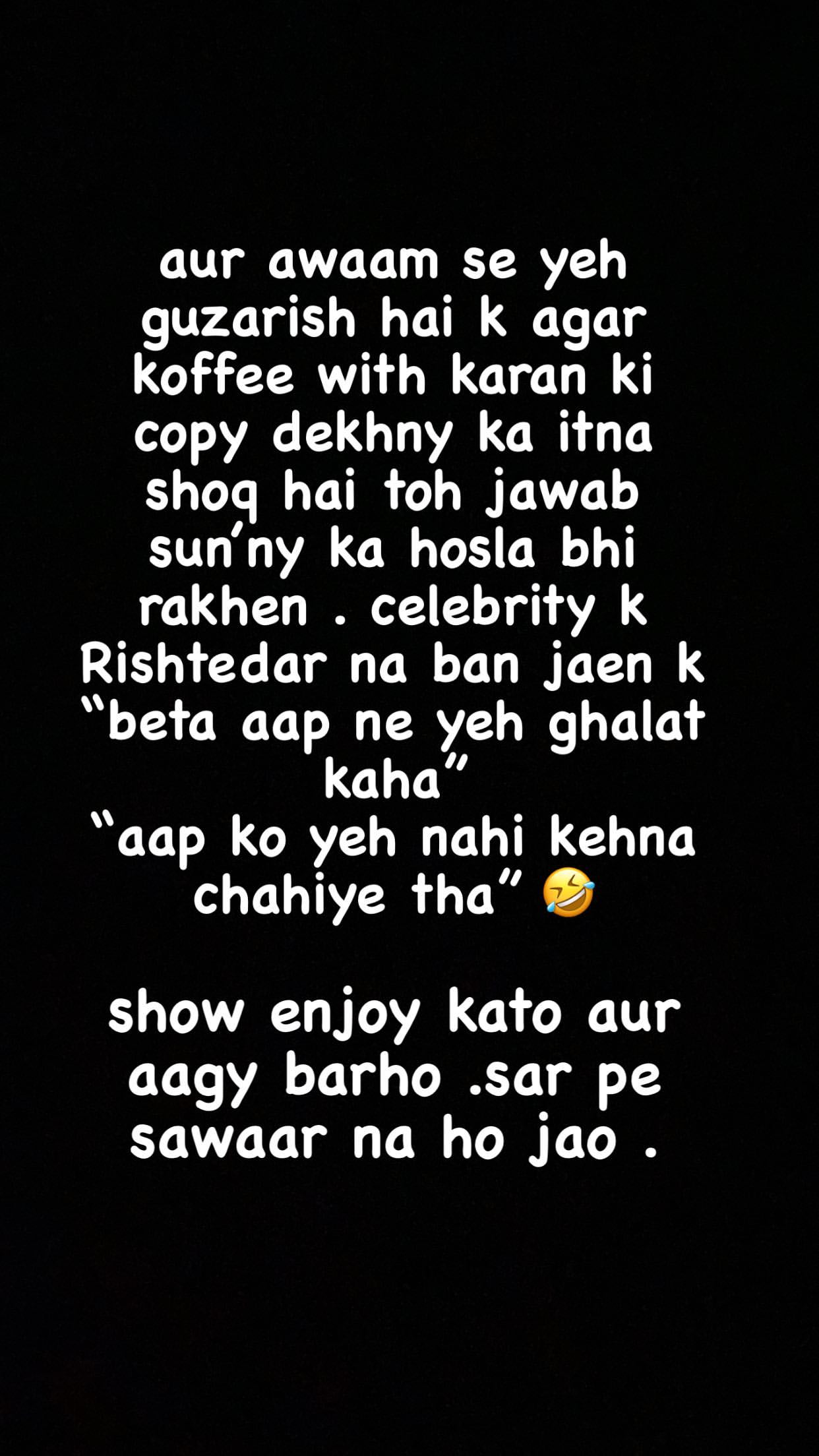 Watch this episode of the show “Ghabrana Mana Hai” to know the details!

So, what do you think about this controversy that is taking social media by storm? Who is right in your view? Don’t forget to share your valuable feedback!

Wardah Farooqi
Wardah Farooqi has been working as a writer for 6 years. She also worked at Dunya News, Live Pakistan Magazine, and numerous local as well as international platforms. When she isn't writing, you can find her assisting people in bringing out the best!
Share
Facebook
Twitter
Pinterest
WhatsApp
Previous articlePeaceful Afghanistan indispensable for peace in Pakistan: FM Qureshi
Next article5 Places in Gwadar You Should Definitely Visit in 2021