Mushaal Mullick, who is the wife of Yasin Malik, in a statement feared that she was saddened to even think that Yasin, with his fast deteriorating health condition, has decided to go on a hunger strike. 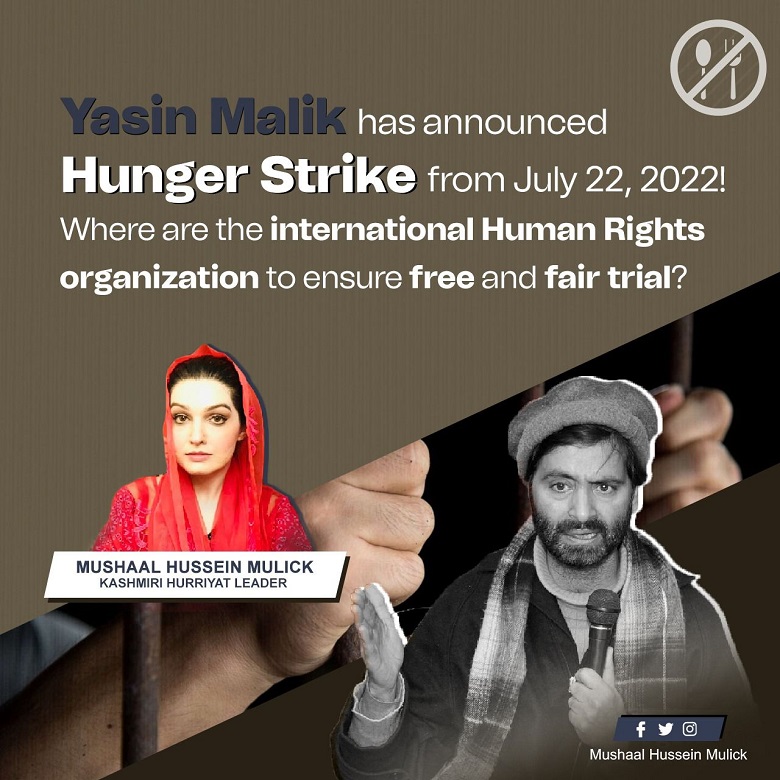 Mushaal said that the JKLF Chairman was implicated in fictitious and fabricated cases in a clear attempt to politically victimise him, who was even denied the right of personal appearance in the ongoing trial, in complete contravention of legal and democratic norms.

Therefore, she stated that he was left with no legal recourse, eventually he took the decision of going on a hunger strike unto death in the Tihar jail death cell.

Mushaal lamented that the world’s powers and so-called human right organizations’ criminal silence pertaining to the inhuman and cruel treatments being meted out by the Indian fascist Narendra Modi-led government against Kashmiri people especially Yasin Malik raised many eyebrows.

The Hurriyat leader stated that the world treated the Kashmiri people as if the world did not belong to them.

“Why are we living in a world where we will not be heard until we go on strikes or are dead? Do our voices not matter? Are we Children of lesser God?,” she questioned.

Mushaal went on to say: “His 10-year-old daughter Raziyah Sultana urged her father not to go on hunger strike, hoping the world listens to the cry of this Kashmiri child.”

The Chairperson urged that the world and human right organizations should take notice of this grave human right violations of depriving Yasin Malik of all fundamental and legal rights and pressed India to ensure his early and safe release.

However, she maintained that the Kashmiris’ struggle for the right of self-determination would continue and the draconian strong-arm tactics of the Indian government cannot dampen the courage of brave Kashmiri people and they would fight till their last breath to turn the dream of right to self-determination a reality.

Mati
Mati-Ullah is the Online Editor For DND. He is the real man to handle the team around the Country and get news from them and provide to you instantly.
Share
Facebook
Twitter
Pinterest
WhatsApp
Previous articleFM Bilawal launches dispatch of emergency relief goods for Afghans
Next article200 Women Students from KPK from US Embassy-funded English Works! Program