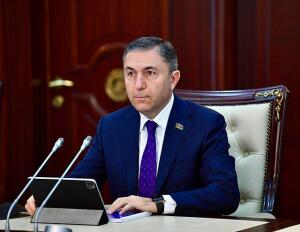 BAKU, Azerbaijan: The Member of the Parliament of the Republic of Azerbaijan Tahir Mirkishili has said that Azerbaijan will continue its struggle against the Armenian aggression and to ensure peace and stability in the region.

In a statement, he said that the current military-political power of Armenia is directly responsible for the tension, martyrdom and injury of Azerbaijani servicemen as a result of the next provocation of the Armenian military units starting from September 12.

“I can definitely say that the revanchist forces in this country have become a tool of foreign forces that do not want peace in the region, and they are hindering stability in the region by fulfilling the orders of those circles,” he said.

The Azerbaijan MP said that while the state of Armenia should have fulfilled the obligations it assumed in the agreement of November 10, 2020, it did the exact opposite by concentrating new military equipment and gathering manpower on the border with Azerbaijan, and was caught up in revanchist thoughts.

Therefore, during the last month, the provocations of the Armenian armed forces in the direction of the Lachin and Kalbajar regions of the state border, and the firing of different types of weapons on the positions of the Azerbaijani Army in those regions were intense.

Unfortunately, he said, neither during 30 years nor during the last two years, there was no pressure or serious warning on the Armenian state, which used all types of terrorism at the state level and ignored the demands of international organizations. As a result, Armenia expanded its provocations.

Tahir Mirkishili said that as always, Azerbaijan continues its struggle within the framework of international legal norms and, as a state that ensures the implementation of the resolutions issued by the UN Security Council, continues its efforts to establish peace and stability in the region.

Calling the officials of a number of states by Prime Minister of Armenia Nikol Pashinyan immediately after the violation of the ceasefire by the Armenian military units will not be of any use, he said.

The parliamentarian said that because Azerbaijan has not violated any international legal norms, on the contrary, it has neutralized revanchist groups engaged in provocations in the region. Azerbaijan maintains its security and engages in self-defense in accordance with Article 51 of the UN, he said.

Tahir Mirkishili also said that the Armenian prime minister once again put himself in a ridiculous position by appealing to the Collective Security Treaty Organization (CSTO) for help.

The MP said that Nikol Pashinyan should know that the international community recognizes Azerbaijan’s territorial integrity approved by UN and respects its border inviolability.  On the other hand, each of the states represented in CSTO are countries that have friendly relations with Azerbaijan. The Armenian prime minister, in fact, knows this very well but he is still looking for a partner in his wrong actions by continuing his meaningless appeals.

In fact, Pashinyan would be better off cleaning up the revanchist and subversive forces in his government and military rather than wasting his time on such appeals. Of course, if he wants his country to live in peace and stability. Otherwise, as our Commander-in-Chief emphasized, the “iron fist” is in place and is capable of crushing the heads of those who commit provocations against our country at any moment, no one should doubt that.

The Azerbaijan MP Tahir Mirkishili maintained that there is a people-government unity in Azerbaijan as in the 44-day Patriotic War in 2020, our people are still tightly united around their Leader as a fist, and our heroic soldiers are ready to fulfill the orders of the Supreme Commander-in-Chief Muzaffar. “We will continue our rightful struggle,” he expressed the resolve.

Mati
Mati-Ullah is the Online Editor For DND. He is the real man to handle the team around the Country and get news from them and provide to you instantly.
Share
Facebook
Twitter
Pinterest
WhatsApp
Previous article
PM Shahbaz Sharif to attend State Funeral of Queen Elizabeth II
Next article
Armenia must be recognized as a criminal and terrorist country, says Jabi Guliyev
Share
Facebook
Twitter
Pinterest
WhatsApp