ISLAMABAD, Pakistan: The Chairperson of Peace and Culture Organization Mushaal Hussein Mullick has said that she and her 9-year daughter Raziyah Sultana are willing to record their testimony before Stock White against the brutalities faced by the family and her jailed husband.

Speaking at an important session on war crimes in IIOJK here on Friday, she lauded the London-based law firm Stoke White for the courage to submit a legal appeal before the UK police seeking the arrest of Indian Army chief General Manoj Mukund Naravane and Home Affairs Minister Amit Shah for war crimes in Indian Occupied Jammu and Kashmir (IIOJK).

Mushaal Mullick, however, demanded that the name of the most-wanted criminal Prime Minister Narendra Modi should also be added to the list because all these criminal and inhuman acts are being perpetrated by the Indian authorities under his patronage. 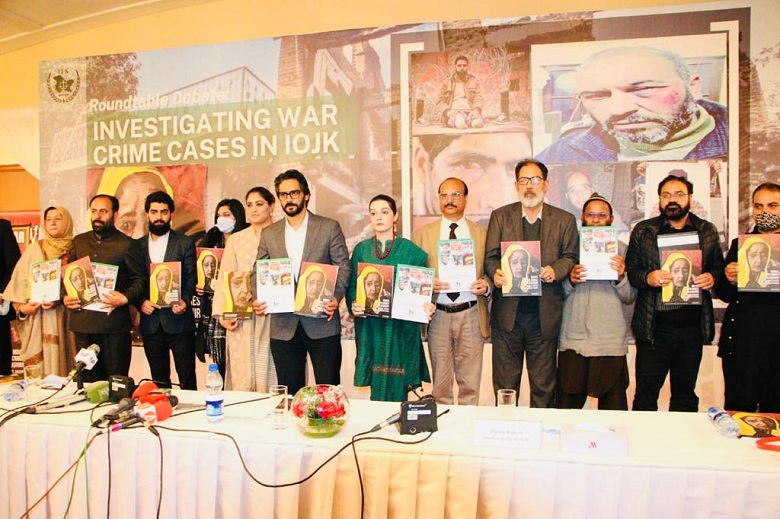 The Hurriyat leader said that she and her daughter are ready to record their testimony before the firm as Yasin Malik has been languishing in Indian notorious Tihar, where he is battling for life because he has been deprived of medicines despite being seriously ill what to talks of other basic human rights.

It is pertinent to mention here that London-based law firm Stoke White submitted evidence including 2,000 testimonies to UK police documenting how Indian troops headed by General Manoj Mukund Naravane and Home Affairs Minister Amit Shah were responsible for the torture, kidnapping, and killing of activists, journalists, and civilians in IIOJK.

The Director of international law at Stoke White Hakan Camuz said that he hopes the report would convince British police to open an investigation and ultimately arrest the officials when they set foot in the UK.

Mushaal, the wife of jailed Kashmiri leader Muhammad Yasin Malik, said that Kashmir under Indian military siege for over 900 days as the region has been turned into the largest open prison and torture cell in the world but the world community observed criminal silence.

Mushaal Mullick said the firm rightly pointed out that nearly three decades have passed and not a single member of the Indian military has been prosecuted for unlawful conduct in IIOJK, despite the alarming upsurge in state-sponsored terrorism in the occupied valley.

The Chairperson said that the report further exposed the ugly and fascist face of the Hindutva regime, as in the past year, 450 cases of torture; 1,500 cases of pellet gun victims; 100 enforced disappearance, and 30 cases of sexual violence were reported.

Mushaal said that the report once again exposed the systematic nature of war crimes conducted by Indian authorities against the Kashmiri Muslims with documented proof, besides exposing new evidence of complicity between Delhi and Tel Aviv within a broader context of security policies.

The chairperson demanded that the UK government should not only swiftly act upon the application but legal forms elsewhere in the world should file such appeals to their respective governments under the “Universal Jurisdiction” principle for the arrest of Narendra Modi as it’s the only panacea to the decades-long Kashmir dispute.

Mushaal Mullick said that look at Gaw Kadal massacre victims, as Justice continues to elude the victims despite the passage of 32 years because the brutal army is given complete legal cover since Modi legalized Kashmiris massacres amid the international community’s apathy toward looming world worst humanitarian catastrophe.

Mushaal lamented that the government of supremacist Modi usurped the social, religious, political, and basic human rights of the Kashmiri people.

Mushaal said the world powers are well-aware of the fact that Kashmir is burning and Kashmir is bleeding but their financial interest stop them from taking any action against India.

The Hurriyat leader said that the world should no longer be bystanders to India’s crimes and impunity and should shun the duplicity and do the courage like the London based firm by accepting the bitter reality so as to ensure resolution of the Kashmir dispute as per the wishes and aspirations of Kashmiri people.