LAHORE, Pakistan: The World Hearing Day 2022 with the theme “To hear for life, listen with care” was observed at the University of Health Sciences (UHS) on Thursday highlighting the importance and means of hearing loss prevention through safe listening.

The Society for Audiological and Developmental Ailments (SADA), in collaboration with UHS, organized an international conference on “Hearing and Speech” on the occasion. More than 250 delegates participated in the moot. 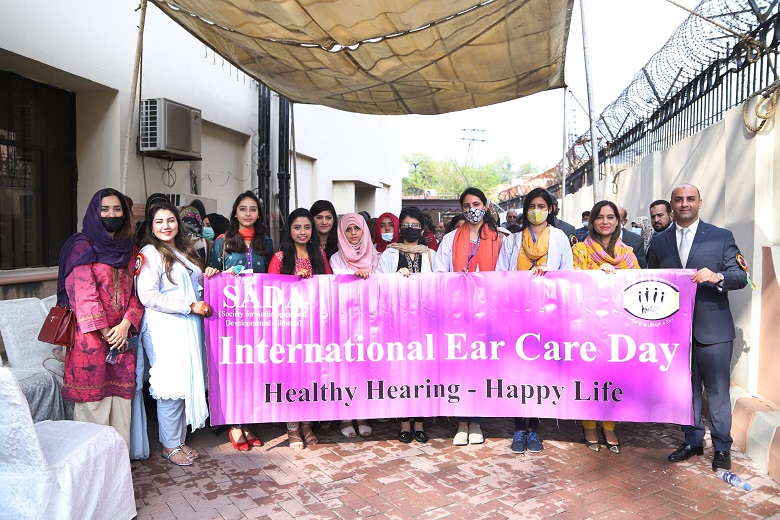 Addressing the inaugural session of the conference, UHS Vice-Chancellor Professor Javed Akram said there was evidence that early intervention was more effective than later intervention in improving outcome and, therefore, neonatal screening for bilateral congenital permanent hearing impairment should be held in all hospitals.

He said the World Health Organization had selected the third day of the third month to observe World Hearing Day due to the resemblance of number 3 to the human ear.

He said the day was observed for promoting global action on hearing care and minimizing the occurrence of impairment.

Professor Javed Akram while appreciating the efforts of SADA for the rehabilitation of hearing impaired children said deafness could be prevented by marriage counseling and avoiding first-cousin marriages. He said people should avoid the use of cotton buds to remove wax in the ear as it could damage the eardrum. He further said the use of oil and cleansing of ears by quacks or untrained people also could damage the tympanic membrane.

Professor Javed Akram proposed the establishment of a Cochlear Implants Bank to fund the treatment of hearing impaired children for which the seed money could be provided by the university. He said the varsity would start diploma and degree programs on cochlear implant surgery.

UHS VC added that it was possible to have good hearing across the life course through ear and hearing care as many common causes of hearing loss could be prevented, including hearing loss caused by exposure to loud sounds.

The SADA President Dr. Afzaal Alam who is himself a consultant audiologist gave a briefing on the history of the society and initiatives he had taken eight years ago to facilitate deserving hearing impaired children of Pakistan. He apprised that the society was established to provide equal opportunities to children with hearing and speech disabilities so that these children could become useful citizens of society.

Dr. Afzaal further said that out of 1,000 newborn children 3-4 were affected by severe hearing loss, and in Pakistan, the number of hearing-impaired children was increasing. Most of the affected families belonged to low-income underprivileged groups, he said stressing the importance of parents’ positive response and efforts towards the rehabilitation of their children.

The SADA CEO Air Commodore (retd) Inam Ul Haq Raja said the Alam School for Speech and Learning was established in 2015 to augment the efforts of the society. He informed that the society had so far provided free as well as subsidized cochlear implant surgery, hearing aids, and speech-language therapy to deserving hearing-impaired children. He claimed that 30 of such children had joined normal schools after complete rehabilitation.

The main highlight of the event was the performance of students studying in Alam School for Speech and Learning which was highly appreciated by the audience and left them emotionally moved.

In the end, a walk was held to highlight the importance of World Hearing Day and to create awareness in society for this cause.