New Delhi, India: At last Supreme Court of India which had been an instrument against Muslims and had been supporting the BJP’s design of fanning hatred against Muslims, has subbed Hindutva leadership of India.

Supreme Court had to say that enough is enough and India cannot be run by butchering Muslims and tagging them traitors. Supreme Court of India has observed that BJP leader Nupur Sharma is responsible for what is happening in the country, the Supreme Court said on Friday over her comments on Prophet Muhammad (PBUH) that triggered massive anger among Gulf nations and protests in India. Coming down heavily on the Bharatiya Janata Party leader, the SC bench further observed that her “loose tongue” has not only “set the entire country on fire”, but she is also responsible for the unfortunate incident in Udaipur.

The political heat wave has led to a constitutional meltdown in India as evident from incidents of Udupi to Udaipur – via Khargone, Prayagraj, Delhi, and Gulbarg Society, from banning Hijab in classrooms to preventing Azaan on loudspeakers, from bullying to bulldozing, from blasphemy to beheading. 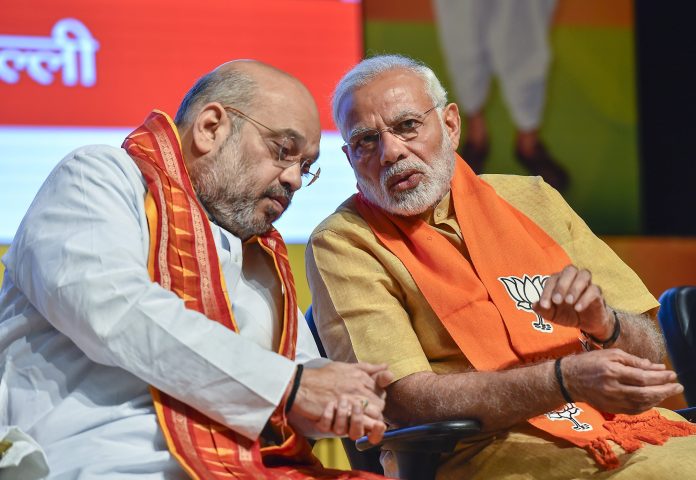 BJP is adopting every means to gain its political pursuit in the country with perfectly dubious means – saam, daam, dand, bhed – making a mockery of constitutional provisions. They are making an alliance with Shiv Sena to make India a Hindu state. Modi government is planning another false flag operation to distract attention from certain issues such as an all-time high unemployment rate, a 30-year high wholesale price index, and devaluation of the Indian currency. A recent episode of the killing of Hindu tailor, Kanhaiya Lal is brain design of BJP to gain sympathy vote against Muslims.

Moreover, the likely killings of minorities will increase in India to gain their political motives. Indian Home Minister Amit Shah is trying to divert the attention through incidents like the murder of a Hindu tailor Kanhaiya Lal and associating the linkages of killers with Pakistan.

Rahul Gandhi had already hinted at a possible ‘distraction’ attempts by the Modi government in the near future. The way Indian media has launched a propaganda campaign against Pakistan over the murder in Udaipur, Rajasthan has confirmed that Modi is busy in planning his next distraction” as he has his “mastery in entire distraction science”. Pakistan has categorically rejected attempts by the BJP-led Hindutva government in India of maligning Pakistan over a murder incident in Udaipur, Rajasthan. It is BJP-RSS ‘Hindutva’ driven Indian regime’s attempts at maligning Pakistan including by externalizing their internal issues through pointing fingers towards Pakistan growing evidence in Rajasthan that both killers were active members of RSS’ Muslim branch (Rashtriya Muslim Manch). This needs to be hammered down as it reinforces the suggested narrative.

We may need to launch a strong and persistent campaign linking it with the case of Ajmal Kassab as well.

On the contrary Indian media is trying to link these killers Riaz Attari and Ghaus Attari with Pakistan-based Islamic group and ISIS, some TLP activists are trying to eulogize the beheading and giving credit to PDS Qibla KHR as the slogan of “Sar Tunn Say Judda” was raised by Attaris in a video posted after beheading, this slogan was deliberately raised and tactfully coined. ISIS is operating in India since 2016 under the leadership of BJP leadership.