Dhaka, Bangladesh: Intelligence circles of capital city of Dhaka has got revealing information related with Holey Artisan Bakery attack which was ambushed on July 1, 2016.

Latest information confirmed that Asim Umar who was killed recently in Helmand Province of Afghanista, was master-mind of Holey Artisan Bakery attack who by that time was also operating through Kerala India.

Born  and raised in Sambhal, Uttar Pradesh India, Asim Umar, whose real name is yet to be confirmed  joined Al-Qaeda and became so-called Chief of Al-Qaeda South Asia but then joined Daesh terror group when Al-Qaeda was eliminated from Afghanistan and then he planned several terror operations in Pakistan, Bangladesh and Sri Lanka with the help of Kerala-based Daesh group.  Interestingly, this is not confirmed that Asim Umar was born and named as Asim Umar or he had different name or family background in childhood because according to some Indian newspapers, reporters failed to find any person with Asim Umar name in any Muslim family. He could be a Muslim-converted personality also.

Journalistic circles believe that Holey Artisan Bakery attack was a result of sheer failure of Dhaka Police because Directorate-General of National Security Intelligence passed credible information to Dhaka Police in May 2016 that terrorist outfits are receiving financial support from religious groups based in Kerala India for a serious terror attack on foreigners living in Dhaka. 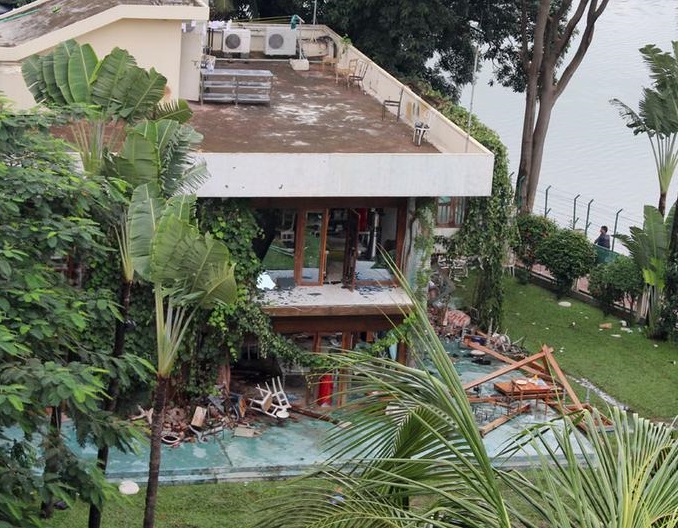 It is pertinent to mention that government of Bangladesh in 2016 directed national intelligence agency not to share its report with media that was submitted to Prime Minister Secretariat about Holey Artisan Bakery attack due to cordial relations with Indian government but matter was shared through diplomatic channels with India without sharing with media.

Latest report also indicates that Asim Umar travelled to Kerala India from Afghanistan on fake passports not less than three times during August 2015 to March 2018.

It was also confirmed that he was man behind murders of several bloggers and writers in Bangladesh.

Interestingly, Asim Umar had been declared a fugitive by a Delhi court and Indian intelligence agencies officially were in touch with Interpol as well as the US and Afghan agencies to track his activities and counter his recruitment bids in the country while he was travelling to Kerala.

It may be mentioned that Directorate-General of National Security Intelligence passed credible information to Dhaka Police in May 2016 that terrorist outfits are receiving financial support from religious groups based in Kerala India for a serious terror attack on foreigners living in Dhaka.

Directorate-General of National Security Intelligence (National Security Intelligence) shared convincing information with Police chief of Dhaka in a letter sent in May 2016 that Ansar-al-Islam and Jamaat-ul-Mujahideen are collaborating for a serious terror attack in Dhaka despite of their (Ansar-al-Islam and Jamaat-ul-Mujahideen) differences.

However, Dhaka Police did not take intelligence reports as well as letter sent by prime intelligence agency of Bangladesh seriously and Police were of the view that Ansar follows al-Qaida while Jamaat-ul-Mujahideen represents Islamic State (Daish) and there was no chance for any of their joint action in capital city of Dhaka.

Sources say that intelligence agencies of Bangladesh took issue of involvement of Kerala-based terror groups again with Indian intelligence circles after a 17 year-old Hafeezuddin (Hafesudheen Theke Kole) from Kasaragod district in Kerala was reportedly killed in a US drone strike in Nangarhar province of Afghanistan. Bangladeshi intelligence networks questioned that why Indian intelligence agencies were silent and unmoved, knowingly that terrorists were getting training in South India and had been travelling to Afghanistan for and over 47 boys from Padanna near Cheruvathu had been killed in Afghanistan.