Dhaka, Bangladesh, July 2, 2022: Thousands of Bangladeshi Muslims under the banner of Islami Andolan Bangladesh, one of the top Islamic political parties in the south Asian Muslim majority country of 170 million people, on Saturday held a grand rally and brought out a giant procession in the capital Dhaka in protest against decades-long water aggression by India, affecting millions of Bangladeshis and putting an adverse impact on the environment. 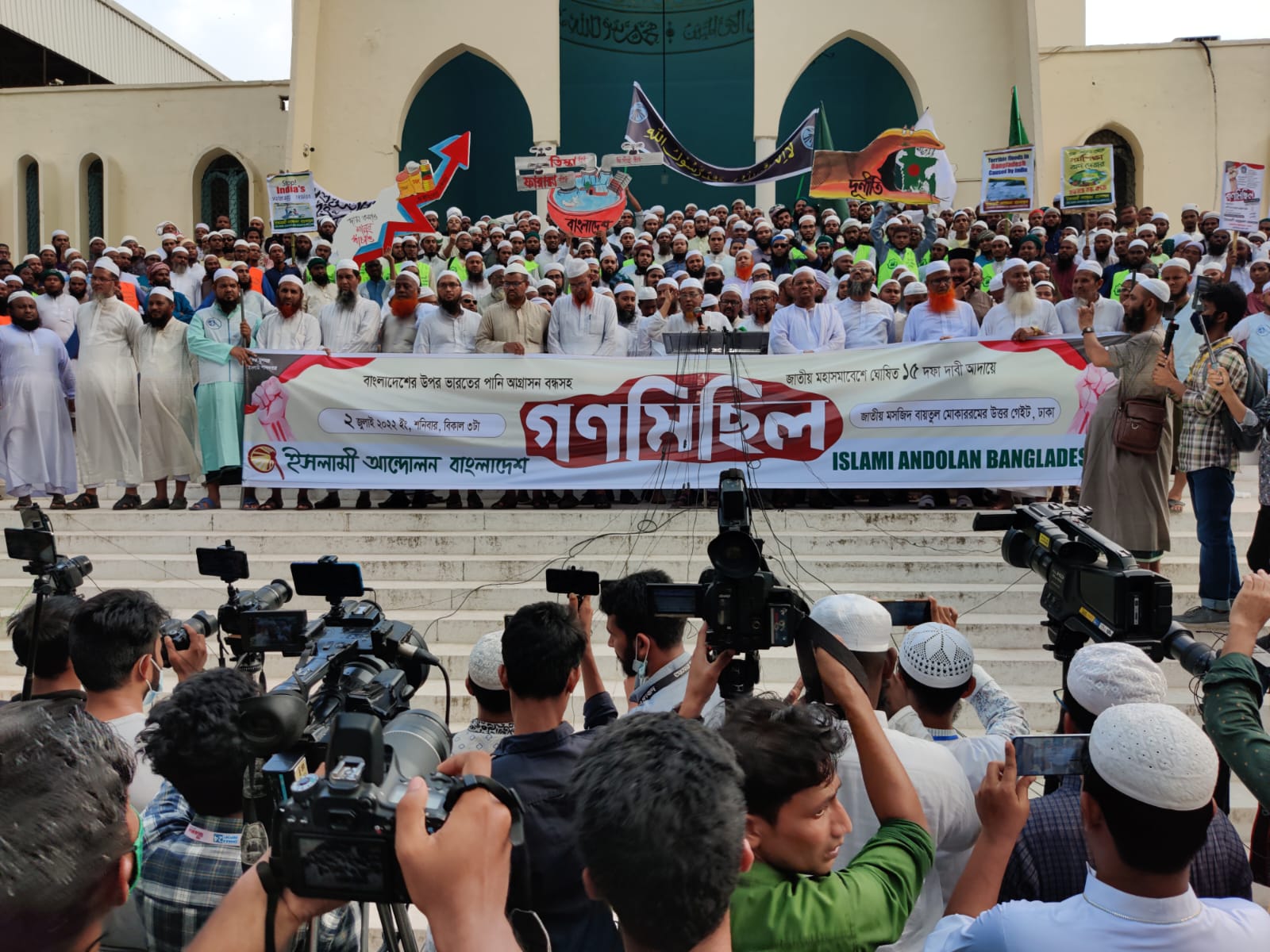 Speakers at the rally blamed India for constructing embankments on 53 common rivers violating international river law, resulting in an alarming loss of the navigability of Bangladeshi rivers and causing frequent devastating floods and other natural disasters.

They called on the Bangladesh government to hold effective dialogue with India immediately to solve the long-pending common river water sharing issue. 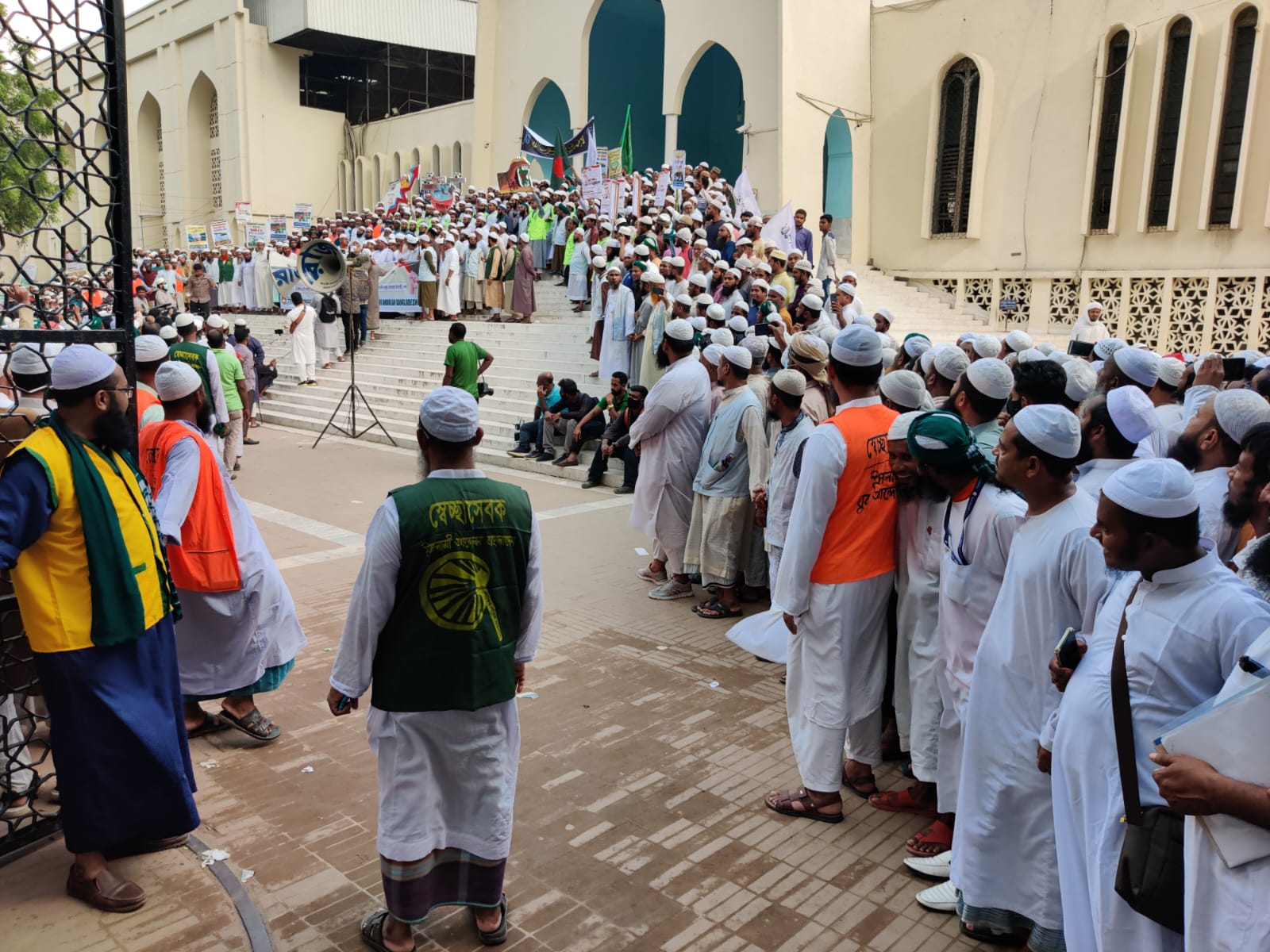 Speakers also urged Bangladeshi authorities to stop conspiracies to remove religious and moral lessons from textbooks at primary and secondary levels of education and repeal alcohol rules that violate Islam.

Addressing the grand rally, the leader of the party and one of the noted spiritual leaders of thousands of Muslims in Bangladesh, Mufti Syed Muhammad Rezaul Karim (Pir Saheb Charmonai), said that Bangladesh is a riverine country and most of the country’s economy depends on rivers. 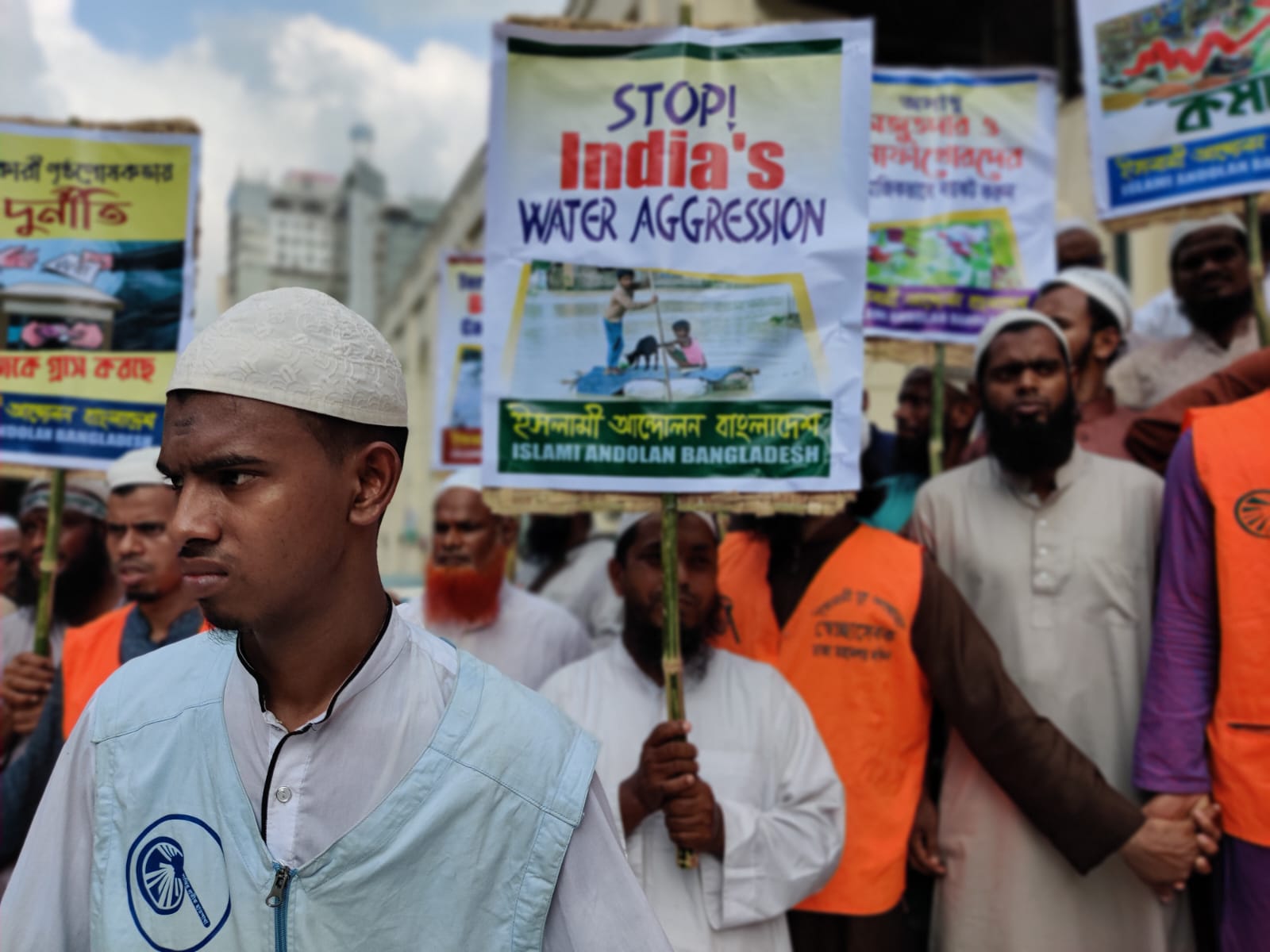 “But the government’s wrong policies and Indian water aggression have been destroying the livelihoods and ecological balance of Bangladesh for a long time,” Karim said.

He called on the people of Bangladesh to build a strong mass resistance against India’s water aggression and anti-people activities of the ruling Awami League government.

Underlining Bangladesh’s foreign policy especially towards India as “knee-jerk”, he added that India is destroying the livelihoods of millions of Bangladeshis sometimes by making huge croplands as deserts and sometimes by flooding.

“There were 24,000 kilometers of waterways in Bangladesh. It is now down to 4,000 kilometers. After the country’s independence, 158 rivers have dried up due to negligence,” Karim said, adding that India has blocked the major water flows of the country, including the 54 joint rivers.

He also accused India of destroying the food security of the countrymen of Bangladesh by blocking water at the required moment and destroying crops and killing people by releasing water during monsoons. 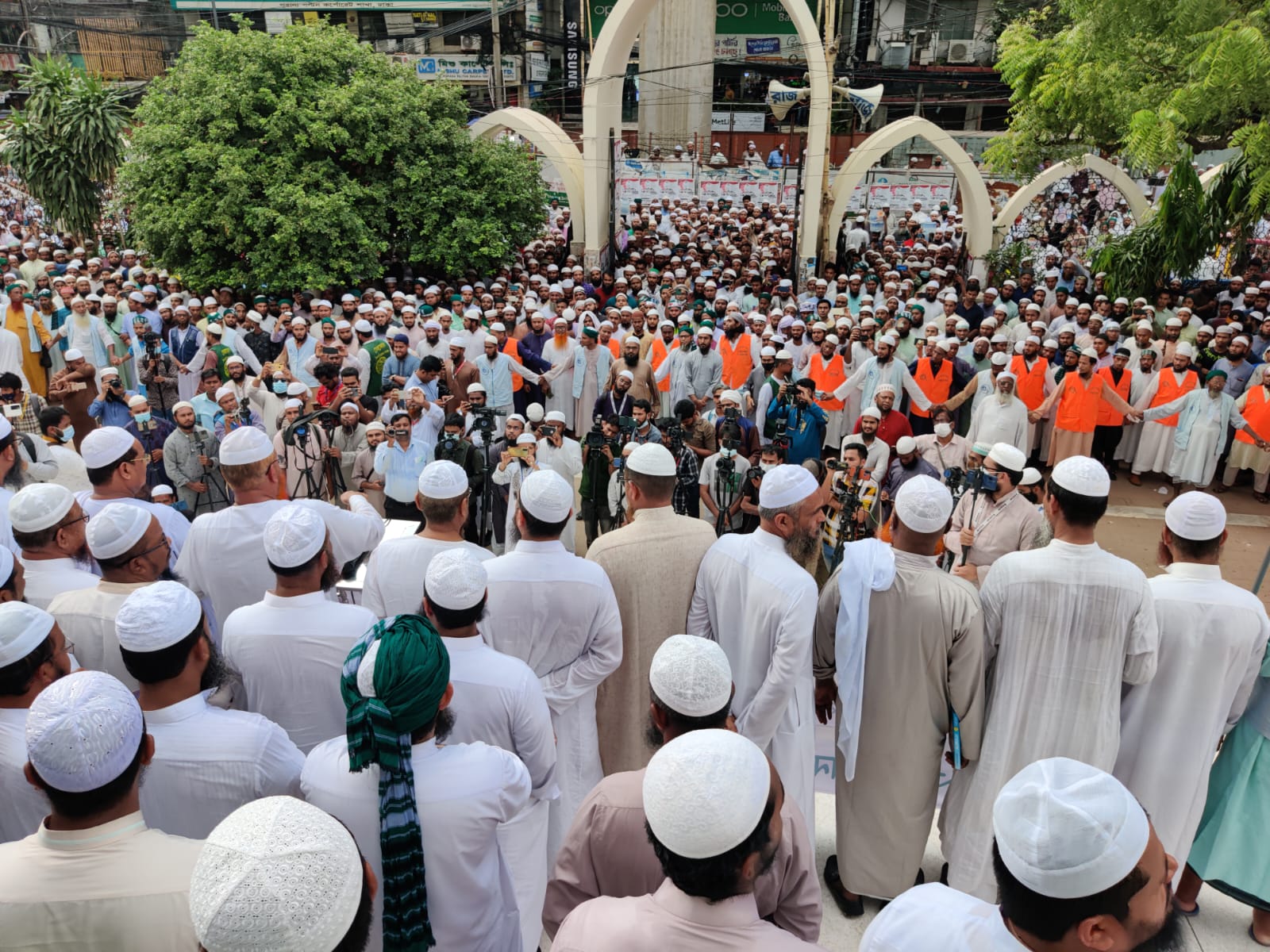 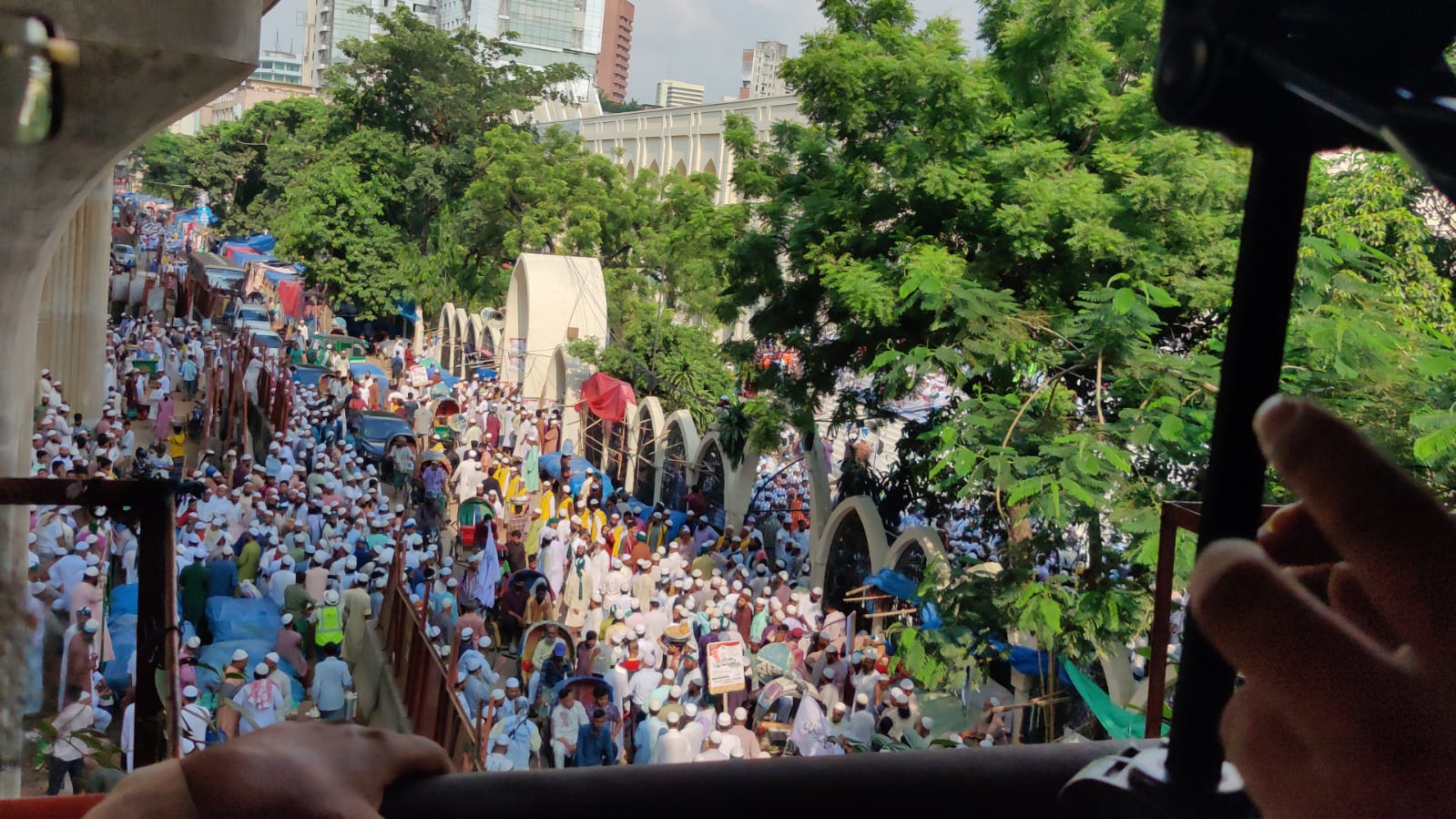 Meanwhile, speakers also said that the ruling Awami League government has been sitting in power for more than a decade ignoring public opinion. “It has established a reign of terror by taking away the right to vote, killing and suppressing dissent, and committing unlimited plunder in the name of development”.

They alleged that to destroy the young generation of the country, the government is providing wine licenses and removing religious and moral lessons from textbooks.

“People are living in fear of famine and the government has celebrated the end of the loot by showing development,” said one speaker.

The top Islamic party also warned the government not to use the controversial Electronic Voting Machine (EVM) in the upcoming general election likely to be held in 2023.