The President of the International Eurasia Press Fund (IEPF) and Chairman of the Public Council under ANAMA Umud Mirzayev has said that Azerbaijani civil society organizations have been blocked from entering the territory where Russian Peacekeeping forces are located.

“A living border has emerged. They prevent us from monitoring,” Umud Mirzayev said while talking to the Eurasia Diary (Ednews) as he joined a protest being held near the post of Russian Peacekeepers on the Shusha-Khankendi Road by the representatives of Non-Governmental Organizations (NGOs) of Azerbaijan.

The protest is being held against the fact that Azerbaijani experts are not allowed to enter the territory to monitor the illegal exploitation of deposits located in the areas under the temporary control of the Russian Peacekeepers. 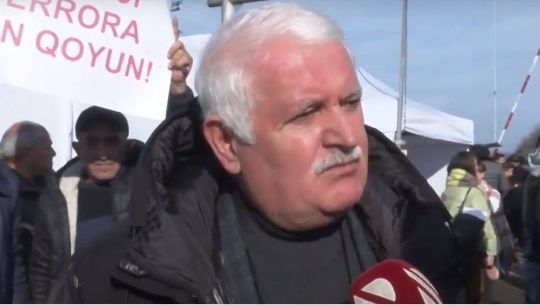 Demanding an explanation from Alexander Volkov, Umud Mirzayev said “Volkov neither gives an explanation nor comes here. I believe that the protest has already achieved its result. I came here today. We are participating in this protest together with about 30 people in our circle, including employees working in the mine safety program, mine victims, and members of ANAMA. Eco-activists, representatives of NGOs took the initiative to monitor our looted lands. If you remember, some time ago, video images of a convoy of vehicles transporting Azerbaijan’s under and overground resources were shared on social networks. At present, the road here is closed both on the right and on the left.”

Umud Mirzayev said that the problem is which people are prevented from conducting monitoring without any explanation. Certain results can be obtained if this monitoring is carried out.


“The forces that carry out environmental terrorism and loot the wealth of Azerbaijan are separatist forces that appeared 30 years ago. For 30 years, they occupied our lands that were freed from occupation. They planted more than 1 million landmines on these lands. It took many years to clear the land. The chemical composition of the roof tiles of the burned and collapsed houses poisoned the soil. The water reservoires were destroyed. All of these are part of environmental terrorism.”

The IEPF President also noted that the forces that do not want peace are interested in the continuation of terrorism. In the absence of peace, these people will continue to freely destroy our underground and overground resources.

“They know very well that if Azerbaijani people have connection with people of Armenian origin, they can come to an agreement to solve the problem. It is a pity that those interesting forces are also supported by Russian peacekeeping groups. Two years ago, immediately after the signing of the capitulation document, the Armenian military units should have been withdrawn from here. They took them out of here, on the contrary, they created conditions for the arming and further strengthening of those forces. In the areas where the Russian military forces are located, Azerbaijani people are fired upon. All of these are unacceptable. This action is the beginning of the great peace. The people of Azerbaijan will control the territories where the Russian peacekeeping forces are located. There is a great need for this.”