The arrest of vlogger Imran Riaz triggers debate about who is a working journalist and who is from the “hybrid cadre”?

Vlogger and Anchor Imran Riaz Khan was arrested from Islamabad Toll Plaza late on Tuesday as several cases have been registered against him on charges of abetment of mutiny and criticism of the state institutions. In his video message, Imran requested all journalists to raise their voices over his arrest. 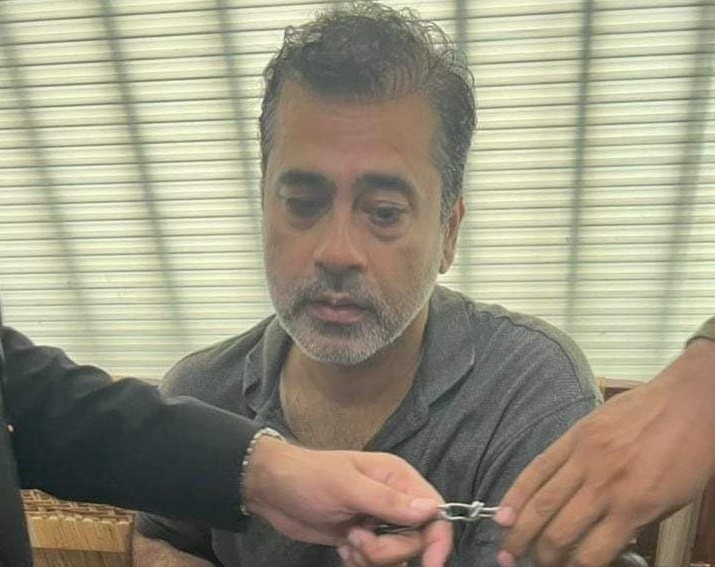 Imran Riaz Khan had been on the invitee lists of almost every important institution and state receptions and enjoyed exceptional relations with the state in past. He is one of those who are usually called “paratrooper journalists”. Paratroopers are those who were either directly landed on television screens without going through the mill of journalism or were placed at junior posts in media outlets for some time and then were launched directly to television screens. Working journalists of Pakistan call them paratroopers and also a “hybrid cadre” of journalism.

That cadre was developed in Pakistan around 2008 to mitigate professional journalists and this hybrid cadre called itself Sahafi (journalist). Making a mockery of politicians and Parliament and discrediting working journalists has been the core term of reference of members of this hybrid cadre. Their articles and their talk shows end by leaving a message that all politicians are corrupt and the parliamentary system has failed to deliver therefore a new constitution is needed to replace the parliamentary system with a presidential form of government or any such political system in which the power lies with a single person instead of directly elected representatives of masses.

By abusing politicians, and making fun of working journalists, Parliament, and the Constitution, this cadre of vloggers, bloggers, anchors, and political analysts successfully filled television screens and prime places in Op-ed pages by 2014. They were elevated as senior experts, senior analysts, and social scientists by the state institutions and state-funded think tanks.

By 2018, they had already replaced working journalists who reached television screens and Op-ed pages after going through long journeys via newspaper newsrooms, or reporting rooms. Soon this new cadre became mouthpieces of different power grids. The front rows during media briefings and dinners in the Presidency, Prime Minister House, Chief Minister Houses, and Governor Houses were filled with these hybrid journalists. Hundreds of unknown websites having no physical addresses or credible names were launched to establish this cadre as “credible writers”.

Seasoned and working journalists had no option but to watch what was going on and to survive the social and economic strangulation they were victims of. Unluckily, there are no rules laid down by the state to determine who can be a journalist therefore this new cadre who had never been in journalism before landing in media outlets faced no resistance from journalist right platforms. This new cadre is composed of doctors, car dealers, engineers, showbiz celebrities, bank employees, shopkeepers, real estate developers, and retired officials of the civil-military bureaucracy.  Some of them were placed in media outlets as researchers or reporters for some time and then were within a year or so moved to television screens. They are those who did not opt for journalism as their career like any working and professional journalist but they entered this arena in the sheer quest of enjoying the power and pleasure a manipulating and cunning media person could enjoy.

Having no ethical teaching of journalism, this cadre from the very first day was considered as dangerous because this cadre can abuse anybody and nobody can touch it because of the power and contacts they enjoy in the system and they are protected layer by layer. Imran Riaz Khan has been a front runner of this cadre and now front runner of the PTI media campaign against the Pakistan Army.

There is a saying “enough is enough” and at last the state has decided to clamp down on this propaganda against the Pakistan Army which is serving only enemies of the state of Pakistan. Intelligence circles confirm that dozens of persons who had been doing campaigns against state institutions have already been arrested, it seems the crackdown will continue as per expected all of the arrested people allegedly belong to the former government and are part of the cyber warfare wing of PTI including Imran Riaz Khan.

They are the ones who had been trolling former opposition members and considered this part of their duties to abuse the Constitution of Pakistan, parliament, and politicians who do not belong to PTI.

Since the PTI government was voted out constitutionally in National Assembly, PTI’s followers upfront disobeys conventional norms of public speaking creating a space that is highly polluted with slurs, name-calling, and sarcastic puns. Unapologetic conduct becomes the new normal and Pakistan. PTI slur brigade can call names, make fun of others, mimic in a most sarcastic way and provide the justification that normativity must not be on the thorn, what is right and what is wrong all is subjective and old norms are redundant. If someone listens to vlogs of Imran Riaz Khan and watches his television shows, one can find all the above-mentioned recipes in the diction he uses for Pakistan Army and other state institutions.

Pakistani media is left with paratroopers and real journalists. The first one, working for PTI, and the second one working against PTI, left no space for seasoned journalists who are unbiased. The real media experts live in utter dismay and disappointment. Neither establishment nor opposition was interested in their concern, the same very concern which establishment is expressing today. This is the problem with a patriotic pro-state journalist that no one feels threatened thus nobody pays attention to him or her. There had been no funding for impartial think tanks, and independent news agencies because they were not part of the problem. Those who are part of the problem were being funded either to continue being a problem or to stop being a problem.

The hybrid propaganda continues its seepage and now targeting the establishment with the same bizarreness.  Impartial, dedicated, and patriotic working journalists consider themselves “non-entity” because they are not part of the problem, they are not anti-state, and they avoid political affiliation, so they are virtually useless, hardly even being noticed.

A writer and analyst Shazia Anwer Cheema who is an expert in the Philosophy of Communication rightly mentioned in her article “State at the Target of PTI’s “Slur Brigade” —You are Useless if You are Not Part of the Problem” that the mechanism of the slur brigade, also provide the aftermath but my articles are not worth noticing because neither I am name-calling the opposition nor I am throwing dirty puns at the state so why invest in me in terms of kind and cash, why not keep on firefighting, why pay attention to the source of the fire?