Islamabad, Pakistan: The Government of Pakistan is launching a special song titled “Kashmir —  Mere Watan” in connection with Kashmir Black Day on October 27. The song will be launched by Foreign Minister Bilawal Bhutto Zardari at Foreign Office Pakistan before starting Kashmir Walk.

Kashmiris on both sides of the Line of Control and across the globe observe October 27 as Black Day. It is the darkest day in the history of Kashmir as on this day in 1947 India had forcibly occupied Jammu and Kashmir by landing its army in Srinagar against the will of the Kashmiri people and in total disregard to the Indian Independence Act and Partition Plan. Under the Partition Plan, Indian British Colony was divided into two sovereign states, India (comprising Hindu majority areas) and Pakistan (consisting of Muslim-majority areas of Western provinces and East Bengal). Every year, 27th October is marked by a complete strike in Indian illegally occupied Jammu and Kashmir (IIOJK) and rallies, seminars and demonstrations in the illegally occupied territory, Azad Kashmir and world capitals. 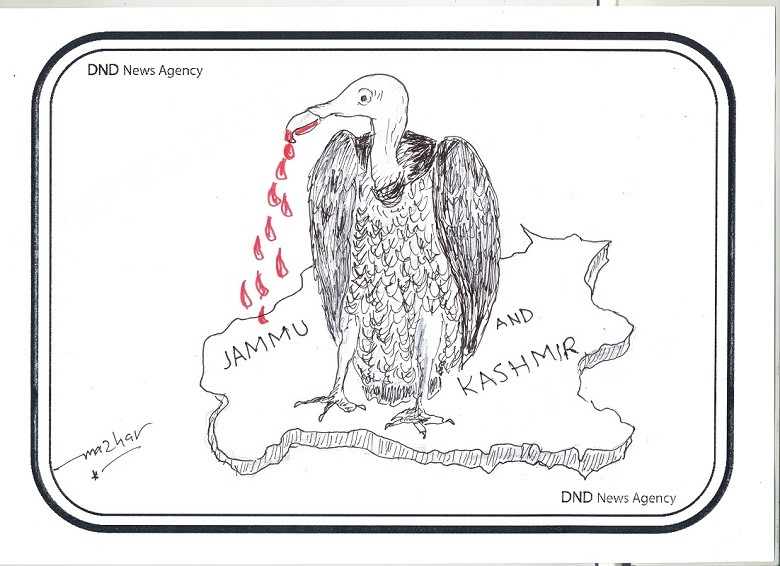 As per the understanding behind the Partition Plan, the Princely States were given the choice to accede either to Pakistan or India on the basis of their geography and demography. Being a Muslim-majority state, with an 87% Muslim population, Kashmir was a natural part of Pakistan as both shared strong bonds in respect of religion, geography and culture. But, unfortunately, the then Hindu ruler of Jammu and Kashmir, Maharaja Hari Singh, destroyed the future of the Kashmiri people by announcing its accession to India under a controversial document, Instrument of Accession, thus laying the foundation of the Kashmir dispute. Many observers including prominent British historian, Alastair Lamb, and noted Kashmiri researchers, Abdul Majid Zargar and Basharat Hussain Qazilbash, deny the existence of such a document with the argument that had it been there, the Indian government must have made it public either officially or at any international forum. Even Indian Archives Department has now declared that the document is lost and the announcement has put question marks on the very existence of the document.

Kashmir in the United Nations

The people of Jammu and Kashmir strongly resisted India’s illegal occupation of their soil and they launched a movement to liberate it from the Indian yoke. Their resilience forced India to seek the help of the world community to settle the Kashmir dispute. Sensing a humiliating defeat to its armed forces, India approached the United Nations Security Council (UNSC) on January 01, 1948. The World Body in its successive resolutions nullified the Indian invasion and called for holding of an impartial plebiscite under its supervision to allow the Kashmiri people decide their fate by themselves. Unfortunately, these UN resolutions and the pledges made by Indian leaders remain unfulfilled even after the passage of several decades, resulting in the continued suffering of the Kashmiri people.

Disappointed over the failure of all the efforts aimed at resolving the Kashmir dispute through peaceful means for decades, the people of IIOJK intensified their freedom struggle in 1989 to secure their right to self-determination. This movement gave sleepless nights to the Indian rulers. They responded this popular movement with the brute military might.

The people of IIOJK added a new dimension to their freedom movement in 2008. They hit the streets in thousands during mass uprisings in 2008, 2009, 2010 and 2016. However, most of the time, Indian troops and police personnel used brute force against these peaceful demonstrators, killing hundreds of them. Since the mass uprising triggered by the extrajudicial killing of popular youth leader, Burhan Wani, on 8th July in 2016, besides killing over 1,300, the troops have caused injuries to more than 29,220 people by firing pellets, bullets and teargas shells on protesters. During this period, more than 10,280 people have suffered pellet injuries and over 395 of them have lost their eyesight in one or both eyes.

India is using every brutal tactic to continue its illegal hold on Jammu and Kashmir for the past over seven decades. Since 1989 till  September 2021 alone, Indian troops had martyred 95,871 Kashmiris, widowed 22,934 women, orphaned 107,842 children and molested or gang-raped 11,245 Kashmiri women. While the whereabouts of over 8000 of innocent youth subjected to disappearance in custody remain untraced, the discovery of thousands of mass graves across the territory has raised concerns about their safety. However, despite exhausting all its resources and resorting to the worst kind of state terrorism during the past over seven decades, New Delhi has miserably failed to intimidate the people of IIOJK into submission.

Narendra Modi-led’s fascist Indian government has put the peace of the entire world in perils by abrogating Article 370 of the Indian Constitution that granted special status to Jammu and Kashmir and annexing it with India on August 05, 2019. It also divided IIOJK into two federally administered union territories – Jammu and Kashmir and Ladakh. After repealing the Article 370, New Delhi put the illegally occupied territory under strict military siege, confining millions of Kashmiris to their homes and arresting thousands. Continued curfew, restrictions and communications blackout led to humanitarian crisis in IIOJK. At the same time, Indian troops intensified violent cordon and search operations across the territory.

The Modi government imposed several federal laws and introduced new domicile rules in IIOJK. In gross violation of the UN resolutions and the international law, it has granted domicile status to thousands of non-Kashmiri Hindus including some IAS officers. The local people fear that more than 800,000 Indian soldiers and over 600,000 migrant labourers present in the territory might also be granted the domicile status in the coming days.

The BJP regime, as part of its anti-Muslim policies, is also replacing the Muslim names of important places and departments with Hindu names in IIOJK. The birth anniversary of former Chief Minister, Sheikh Abdullah, and Kashmir Martyrs’ Day on July 13 have been dropped from the list of public holidays. The Modi govt has initiated the process of delimitation of Lok Sabha and assembly constituencies in IIOJK with an aim to give more seats to Hindu-dominated areas of Jammu division. At the same time, it has flouted a new political front of its collaborators led by Altaf Bukhari in the name of Jammu Kashmir Apni Party.

The basic objective behind all these unilateral illegal measures is to convert IIOJK’s Muslim majority into a minority by settling Indian Hindus in large numbers. It is also aimed at damaging the essence of the UN resolutions on the Kashmir dispute and affect the results in India’s favour if New Delhi is compelled to hold a plebiscite in Jammu and Kashmir at any point of time in the future.

Pakistan’s support to Kashmir cause

The Pakistani leadership has always represented the Kashmiris’ aspirations and never betrayed the faith reposed on it by the Kashmiri people. It was his commitment to the interests of the people of Kashmir that drove father of the nation, Quaid-e-Azam Muhammad Ali Jinnah, to visit Jammu and Kashmir three times before 1947. He had rightly termed Kashmir as the “Jugular Vein” of Pakistan. Prime Minister, Imran Khan, in his address to the UN General Assembly, drew world’s attention to the worsening humanitarian crisis in IIOJK after Modi government’s 5th August illegal move. He repeatedly warned the world that Modi government’s Hindutva policies and aggressive posture posed serious threat to the peace in the region and the entire world. Pakistan’s Foreign Ministry is consistently updating the world leaders on the Indian brutalities in IIOJK. The Pakistan Parliament has passed several resolutions since August 05, last year, expressing solidarity with the oppressed people of IIOJK and condemning India’s illegal actions in the territory. The Army Chief, General Qamar Javed Bajwa, has repeatedly expressed Pak Army’s support to the Kashmir cause. He has declared that Pakistan is ready to fight till last bullet and last soldier for Kashmir.

The Kashmir dispute has become the focus of attention at the global level after the illegal actions taken by the Modi regime on and post-August 05, 2019 in IIOJK. Pakistan’s arduous efforts and the grave human rights situation caused by the continued military siege in the illegally occupied territory convinced the UNSC to hold its session on Kashmir thrice first time after the period of over 50 years. The UN Secretary-General Antonio Guterres has repeatedly offered mediation to resolve the Kashmir dispute in the wake of heightened tension between Pakistan and India. The UN High Commissioner for Human Rights, Michelle Bachelet, several members of UK parliament and US lawmakers as well as world bodies including the OIC, Amnesty International and Human Rights Watch have expressed serious concern over the grim human rights situation in IIOJK. Even the International watchdog, the Genocide Watch in a statement expressed fears of genocide against the Muslims living in IIOJK and the Indian state of Assam.

This is the context of the observance of October 27 as Black Day by the Kashmiris all across the globe. The observance is aimed at sending a loud and clear message to the world community to take stock of the miseries of the Kashmiri people and come forward in a big way to ensure a solution of the lingering Kashmir dispute in accordance with their wishes. It is also intended to send a strong message to New Delhi that the Kashmiris reject its illegal occupation of their homeland and that they would continue their struggle till they achieved their inalienable right to self-determination promised to them by India and the world through several UN resolutions. Following India’s action to change the disputed status and demographic composition of IIOJK, the solution of the Kashmir dispute has become more imperative for ensuring permanent peace in the region and the world at large.