ISLAMABAD, Pakistan: The Society for the Protection of Rights of Child (SPARC) celebrated the Universal Children’s Day 2020 at a Local Hotel in Islamabad on Thursday.

While addressing the event, Senator Sitara Ayaz said that Universal Children’s Day is not just a celebration of children for being the gift of God that they are but to address the issues afflicting children across the world.

Senator Sitara Ayaz further said that in addition to the persistent challenges of health, nutrition, and education, tobacco consumption is a growing factor. 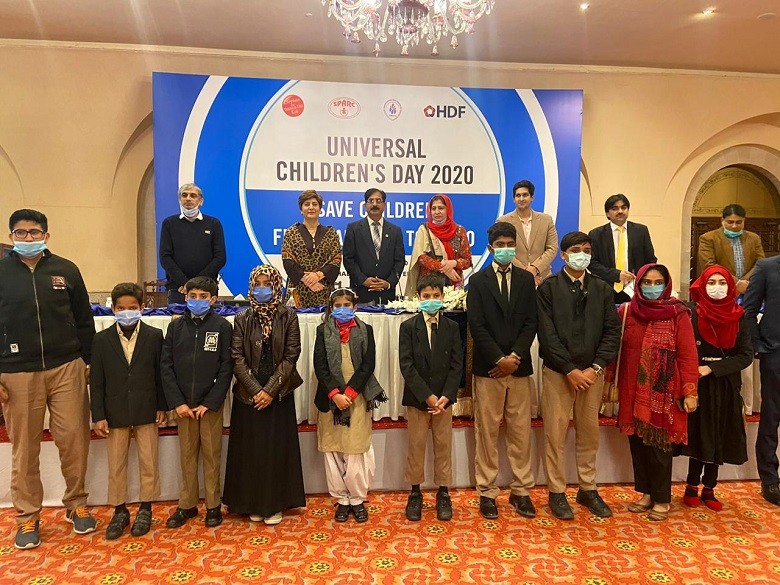 The Senator said that about 1,200 children between the ages of six and 15 start smoking in Pakistan every day. She said that as per the guidelines of the World Health Organization (WHO), we must raise taxes on cigarettes by 30% and implement a health levy bill to make them unaffordable for children.

Sitara Ayaz said that the government must implement a health levy of Rs 10 for the better future of the children of Pakistan.

The Chairperson National Commission on the Rights of the Child (NCRC) Afshan Tehseen said that the tobacco industry targets children in its advertising.

Afshan Tehseen added it is extremely important to take necessary legislative and regulatory measures to protect children from tobacco, and ensure that the interests of children take precedence over those of the tobacco industry.

The Chairperson NCRC said that children are also exposed to second-hand tobacco smoke. She said that nearly 700 million, or almost half of the world’s children, breathe air polluted by second-hand smoke, according to the report.

The Executive Director SPARC Sajjad Ahmed Cheema said that the main responsibility of the state and its institutions besides the parents themselves was to provide children with better living conditions.

The Executive Director SPARC also added that tobacco consumption is not only a health issue. It has serious repercussions on poverty and economic stability, child development, child education, child labor, and in many cases; it becomes a child protection issue as well.

Cheema said that the government needs to remain steadfast to overcome any challenges thrown by the big tobacco industry in order to safeguard Pakistani children from the harms of tobacco.

Mati
Mati-Ullah is the Online Editor For DND. He is the real man to handle the team around the Country and get news from them and provide to you instantly.
Share
Facebook
Twitter
Pinterest
WhatsApp
Previous articleSystems Limited Among Forbes Asia’s 200 Best Under A Billion Companies
Next articlePakistan condemns extrajudicial killing of 4 more innocent Kashmiris in IIOJK