Shehryar Afridi was briefing media persons outside the Diplomatic Enclave in Islamabad after delivering the letters to the United Nations Military Observers’ Group in Pakistan (UNMOGIP). 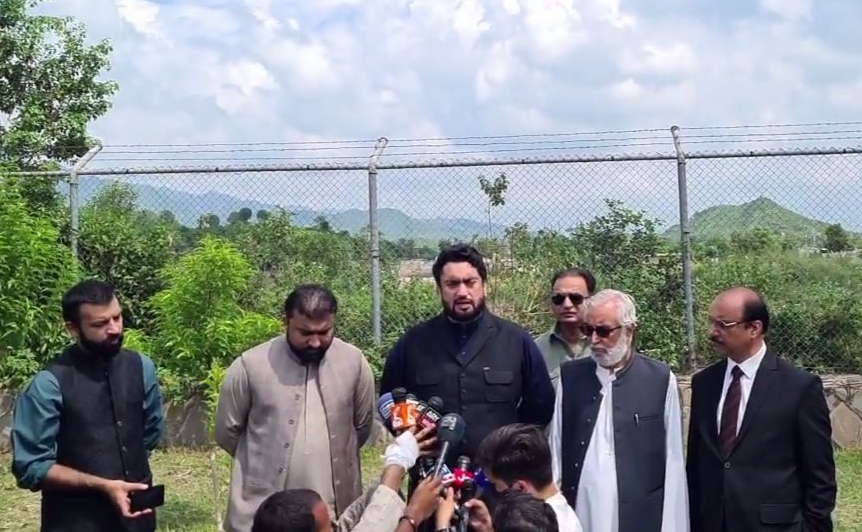 Shehryar Afridi said that the UN Secretary-General must order an immediate investigation into the custodial killing of Syed Ali Geelani which is part of a series of custodial killings of Kashmiri leaders.

“Hurriyat leaders are being killed in custody by the Illegal Occupational regime of India in Jammu and Kashmir in the garb of Covid-19 Pandemic. Had the UN investigated the custodial murder of Ashraf Khan Sehrai, Geelani’s life could have been saved. Now we fear that other imprisoned Kashmiri leaders including the new APHC chief Massarat Alam Bhat, Syed Shabbir Shah, Yasin Malik, Asiya Andrabi, Dr. Qasim Faktu, and others may also be killed the same way,” he said.

Shehryar Afridi said that there is a design to kill all top iconic pro-freedom Kashmiri leaders in the garb of Covid-19pandemic and Mr. Geelani is the second such high profile killing. He said Mr. Geelani’s longtime comrade and successor, Tehreek-e-Hurriyat Chairman Muhammad Ashraf Khan Sehrai was also killed in custody earlier this year. He was on purpose kept in India’s mainland jail where Covid-19 was raging and millions of people were dying.

The Chairman Parliamentary Committee on Kashmir said the custodial killing of Syed Ali Geelani, an influential and uncompromising leader of the Kashmir freedom movement who died on September 1, was under house arrest by the Indian authorities in Srinagar. Afridi said that with Mr. Geelani’s departure, the Kashmiris have lost their most primal leadership.

“This loss may turn out to obstruct Kashmiri people’s voice and compromise their long struggle for freedom. I would also like to bring to attention here the matter in which Mr. Geelani’s death was handled by the occupational Indian government where they shut down the internet across the Kashmir valley and beefed up security forces when word of his death spread,” he said.

Shehryar Afridi said the Jammu and Kashmir police snatched Mr. Geelani’s body from his family members away just hours after he died and deprived the bereaved family of their right to the funeral, for a resistance leader who could once summon thousands of people into the streets to protest.

“As if it was not enough, the Indian Illegally Occupied regime in Jammu and Kashmir has booked the family members of Syed Ali Geelani under black law called the Unlawful Activities (Prevention) Act for resisting the Indian forces bid to snatch the body of Mr. Geelani. Though UAPA is an anti-terrorism law but the Indian regime has been misusing this law against civilians and rights activists. More recently, Mr. Geelani’s family is the latest victim of this law,” he added.

“Against this backdrop, we fear Kashmiri voices will further be muffled and jailed Kashmiri leaders would be killed the same way. In absence of their fast-disappearing leaders, how will the Kashmiri people exercise their fundamental rights of freedom of expression, hold the government to account, and channel critical information on violations of human rights in the valley,” he argued.

Shehryar Afridi said the circumstances leading to the death of Syed Ali Geelani are shrouded in mystery and warrant an immediate inquiry. Shehryar Afridi concluded that the Kashmiris see Mr. Geelani’s death as a custodial killing by the Indian government to silence the strong and rational voice against the illegal occupation of Jammu and Kashmir.