ISLAMABAD, Pakistan: The Chairman of the Parliamentary Committee on Kashmir Shehryar Khan Afridi on Tuesday said that India should be tried for criminally misleading the World opinion as EU Disinfo Lab has fully exposed a network of fake media outlets and NGOs created by India to mislead the world opinion.

While addressing the audience of a seminar held in Islamabad with regard to the Kashmiris’ Rights to Self-Determination Day, Shehryar Afridi said that India can no more keep its illegal occupation of Jammu and Kashmir.

Shehryar Khan Afridi said that the Kashmiri people ask the United Nations Security Council to materialize its commitment to hold an impartial and free plebiscite to decide their fate independently.

He said that Pakistan would keep exposing the Indian expansionist agenda and India can no more mislead the world on its expansionist designs in Jammu and Kashmir.

He said that as the Minister for SAFRON, he had invited UN Secretary-General to Pakistan and he pledged to stand by the UN resolutions on the Kashmir dispute.

Shehryar Afridi said that the Kashmir Committee has been reaching out to all stakeholders of Kashmir to develop its policy on the Kashmir dispute. 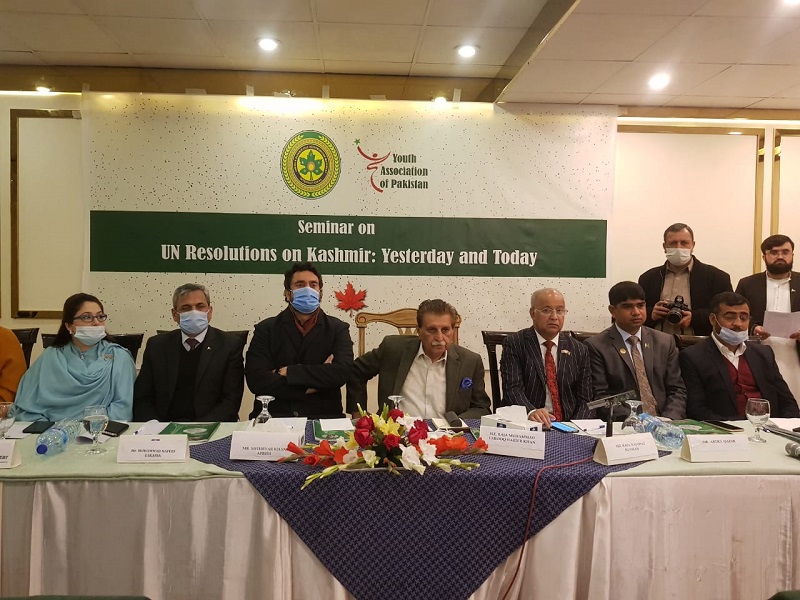 He said all political parties had representation in Kashmir Committee and the Committee was working to help raise the Kashmir issue with a single voice. He said that tribal Pashtuns had joined hands with the Kashmiri freedom fighters to help liberate Jammu and Kashmir in 1948 and even today, the people of Pakistan stand by Kashmiris through thick and thin.

He said that India was using hundreds of fake NGOs, fake media organizations, and fake websites to mislead the world opinion on Kashmir, and EU Disinfo Lab had fully exposed the Indian vicious designs.

“Today, even the Indian minorities are saying that Jinnah had taken the right decision by getting an independent state for the Muslims of India. Modi regime has been fully exposed due to its expansionist agenda,” he said.

Afridi said that no one can think of making a compromise on two major security issues of Pakistan – our nuclear program and our Kashmir policy.

He quoted some incidents from history to point out the fact how the Kashmiri freedom struggle continued despite Indian imperialist designs.

He said that Pakistan’s new political map had been drafted on his advice and Junagadh was added to the map on his proposal.

He said that the Kashmir issue was debated at the European Union due to efforts by the Kashmiri diaspora and the sacrifices made by the Kashmiris. He urged the government to adopt an effective and robust policy on Kashmir and said that Kashmiris should themselves fight the case of Kashmir.

Raja Farooq Haider criticized his own party Pakistan Muslim League (PML-N) for being silent during their five-year tenure and urged Prime Minister Imran Khan to adopt a strong narrative on Kashmir.

He said that the Hindutva regime of India was trying to establish an imperialistic rule with an expansionist agenda and Pakistan was the only hurdle in Indian designs.

He said that the Modi regime was working to create a Hindu Rashtra by annexing its neighboring countries using its military might and Pakistan and other regional countries must take action in this regard. He lauded Prime Minister Imran Khan and Human Rights Minister Dr. Shireen Mazari for raising the illegal detention of Dukhtran-e-Millat leader Asiya Andrabi in Tihar jail and asked the United Nations for her immediate release.

He said that stereotype policy on Kashmir is no more relevant and the State of Pakistan should adopt innovative diplomacy to raise awareness on Jammu and Kashmir dispute.

Ambassador (R) Nafees Zakaria said that the Kashmiris had led their narrative to counter fake Indian mantra on Kashmir and there have been volumes of reports by internal organizations how India had used money and resources to mislead the world on Kashmir.

He said that India had stood exposed by the fact that around 9000 mass graves had been found in Indian Illegally Occupied Jammu and Kashmir (IIOJK).

He said that the bodies found in these mass graves were all indigenous Kashmiris who had been killed by the Indian fascist regime following its occupation policy of Kashmir.

He said that Amnesty International had issued a report on mass blinding of Kashmiris with pellet guns used by Indian occupational forces.

He said that mass rapes were also being used by Indian occupational forces as a tool of genocide in IIOJK.

Shandana Gulzar Khan MNA called for using media as a tool to fight the Kashmir case on the global arena. She called for raising Kashmir on all issues with one voice, asking the politicians to forge unity on the issue of Kashmir rising above petty political differences.

Mati
Mati-Ullah is the Online Editor For DND. He is the real man to handle the team around the Country and get news from them and provide to you instantly.
Share
Facebook
Twitter
Pinterest
WhatsApp
Previous articlePakistan welcomes an end to Saudi-Qatar feud
Next articleDavid Miller, Rashid Khan, Chris Gayle feature in HBL PSL 2021 Platinum roster