ISLAMABAD, Pakistan: The Chairperson Peace and Culture Organization Mushaal Mullick has said that leaving homes for women has become a nightmare due to the rampant state-sponsored incidents of sexual violence in Indian Illegally Occupied Jammu and Kashmir (IIOJK), as the brutal forces have been using rape and molestation of Kashmiri women as a weapon of war to suppress the seven decade-long Kashmiri struggle for securing their inalienable right of self-determination.

Speaking at a seminar titled ”Empathy or Sympathy: Elimination of Violence Against Women At Academic Institution” as a chief guest at Seminar Hall NIHRC, Quaid-e-Azam University (QAU) in Islamabad on Thursday, she said that the womenfolk in Kashmir were combating around one million armies of India and they were facing all kinds of oppression, harassment and molestations.

Mushaal, who is the wife of senior detained Hurriyat leader Yasin Malik, said that rape was being used as a weapon of war against the women folk in the occupied valley since long to punish the entire Kashmiris.

However, she said that said that Kashmiri women were bravest in the world who have been facing the all sort of state terrorism and brutalities for the last over seven-decades but nothing could dampen their courage. 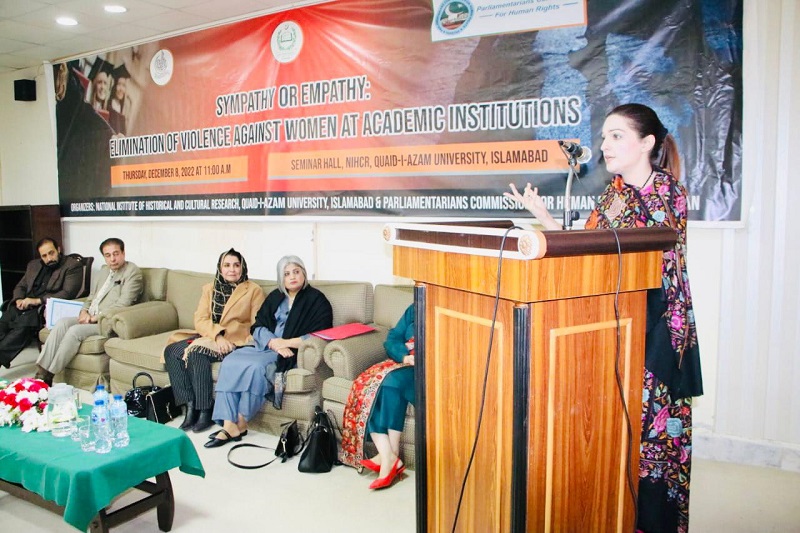 The Chairperson stated that the situation in the heaven-like valley turned from bad to worse in the aftermath of the Indian fascist government’s unconstitutional, illegal and unilateral move of revoking articles 370 and 35A, stripping IIOJK of its special status. She said that the incidents of rape and sexual abuse witnessed an alarming upsurge soon after the notorious move.


Mushaal went on to say that the Modi regime had imposed countless sanctions and restrictions in the valley under the draconian Public Safety Act, forcing the people to live in a situation where they even could not breathe freely.

Mushaal Mullick said that rape and violence used as a weapon of terror constitute a crime against humanity and those responsible must face criminal sanctions.

Narrating the ordeals facing the Kashmiri women, Mushaal said that the Indian army, police and paramilitary personnel had been involved in sexual violence in IIOJK, who have raped or gang-raped over 11,000 women in the territory since 1989. She pointed out that most vulnerable people in war zones are women and children.

The Chairperson maintained that women in IIOJK have horrified titles of half-widow or half mothers as around 2,500 women have been forced to live as half-widows. She revealed that over 22,940 women have become widows since January 1989, as their husbands were martyred by Indian troops or police. She said that Indian forces are present in every nook and corner of the occupied territory and have created an atmosphere of fear and terror.

Mushaal urged the International Community and world rights bodies to come forward as women in IIOJK have been enduring egregious human rights abuses, including sexual violence, rape, and molestation for over seven decades.

Mushaal Mullick said that in order to prevent a nuclear war in South Asia and to prevent heinous human rights violations in IIOJK, the UN Security Council needed to revive the universalizing spirit of the right to self-determination inculcated in the its resolutions and let the people of Kashmir decide their own fate.

Mati
Mati-Ullah is the Online Editor For DND. He is the real man to handle the team around the Country and get news from them and provide to you instantly.
Share
Facebook
Twitter
Pinterest
WhatsApp
Previous article
President Arif Alvi for an attitudinal shift to water and energy conservation
Next article
US and KPK governments help farmers adopt higher value crops, improve irrigation systems & reduce flood risk
Share
Facebook
Twitter
Pinterest
WhatsApp