Since the dissenting voices in the ruling Pakistan Tehreek-e-Insaf (PTI) surfaced to media, a debate has deliberately been triggered in media, twisting the facts arguing that disgruntled PTI lawmakers had been elected in 2018 polls as Independents and that if Jahangir Tareen could have lured the successful candidates to join the PTI, how can the Sindh House bargaining be deemed as unlawful.

Not only the opposition leaders but a certain section of media persons, whose affiliation with the mainstream opposition parties for various reasons is quite obvious now, are hoodwinking the people by running a specific agenda to malign the incumbent government and to justify each and every attempt by the opposition to oust Prime Minister Imran Khan.

The fact is that following the 2018 general elections, with the efforts of Jahangir Tareen, only nine successful Independents joined PTI, paving the way for Imran Khan-led party to form its government in the Centre along with allies. Contrary to opposition’s claim, those were only successful Independent Candidates who were brought in PTI and nothing was unprecedented and unconstitutional. Though Jahangir Tareen’s endeavors helped Imran Khan to eventually form his government but it was all in all Imran Khan on whose name PTI secured 1,68,57,035 votes in 2018 general elections. The PML-N President Shahbaz Sharif is also among those who are taking a jibe on PTI for following a ‘dual standard’. However, it was Shahbaz Sharif himself, who after the 2008 general elections, lured more than 20 Independents and over a dozen MPAs-elect in the PML-Q to gain a simple majority in the Punjab assembly.

Soon after PTI took over the reign of affairs in the Country in August 2018 with the PML-Q and Muttahida Qaumi Movement (MQM) as allied parties, the joint opposition initiated an organic campaign alleging that since PML-Q and MQM were Musharraf’s parties and their ‘political qibla’ (direction) has always been determined by the establishment; therefore, Imran Khan is a ‘selected’ Prime Minister and basically it was army which had set the stage for him to rule the Country. Now who would ask this ‘democratic’ opposition that if with PML-Q and MQM as allies, Imran Khan’s regime was ‘selected’ and ‘illegitimate’, how would they describe their own ‘all-weather’ alliance with these ‘Musharraf’s parties’ in the past and now again in the future if the allies decide to quit the incumbent government?

Succumbing to their ‘instinct’ of lambasting the PTI government even in matter of national security; Indian annexation of Kashmir, COVID-19, February 27 India-Pakistan dogfight, and FATF; the joint opposition now seems to vindicate its illegal and unethical attempt to lure PTI lawmakers by distorting facts, noting that the PTI dissidents were in fact elected as Independents before joining PTI and that Imran Khan is now paying the price for approaching electables to seal the power. However except two, neither any of the dissident MNAs having appeared so far was elected as Independent nor they were electables. In fact, three of those including Ramesh Kumar Vankwani, Wajiha Qamar, and Nuzhat Pathan entered the Parliament in 2008 on PTI-awarded reserved seats. While two of the prominent faces among them Raja Riaz and Noor Alam Khan had lost the 2013 elections on Pakistan People’s Party’s (PPP) tickets. Likewise, Nawab Sher Waseeer, Rana Muhammad Qasim Noon, and Khawaja Sheraz Mehmood also couldn’t make it to the National Assembly in 2013 on PPP’s tickets. 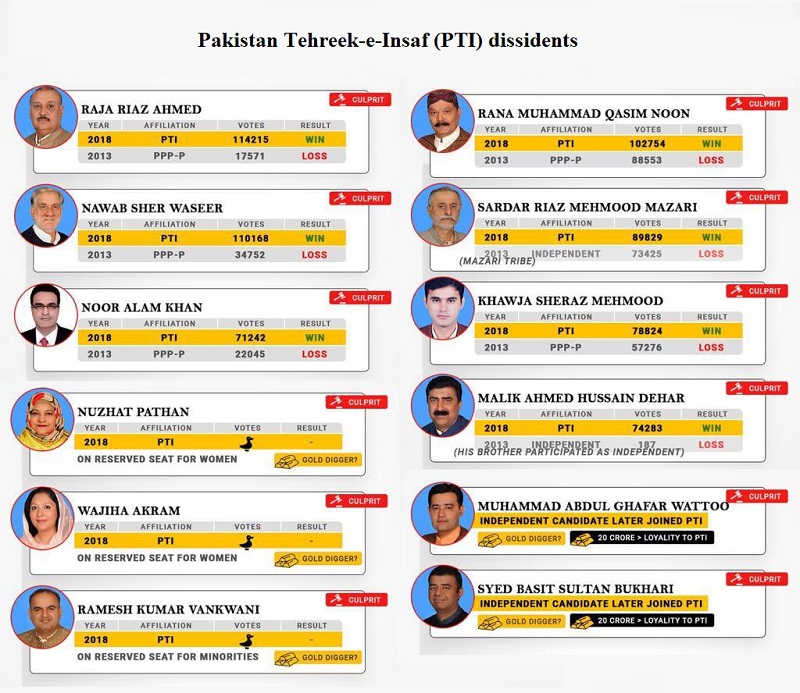 Thus, the self-proclaimed ‘democratic’ joint opposition alliance needs to answer a series of questions for the smearing campaign it has been running since 2018. It also requires to elaborate this ‘well-orchestrated narrative’ that if any PTI member parts away with the Chairman Imran Khan, he/she does so listening to his/her newly ‘awaken conscience’ and realizing that Imran Khan is an ‘undemocratic’, ‘disloyal’, ‘ungracious’, and ‘greedy’ person but if any person from the opposition joins PTI, he/she is bribed, threatened or directed by the ‘establishment’ to do so.