Several members of the Federal Cabinet joined the meeting.

Talking to the UN secretary general, the prime minister highlighted that Pakistan was facing floods of epic proportions which were a dreadful manifestation of climate-induced natural disaster.

The prime minister outlined the extensive rescue and relief efforts being undertaken by the government, in collaboration with UN agencies, international community and humanitarian organizations, to reach out to the deeply affected over 33 million people across the Country.

The prime minister highlighted that UN secretary general Guterres’s visit to Pakistan demonstrated strong solidarity with the people of Pakistan at this critical time. 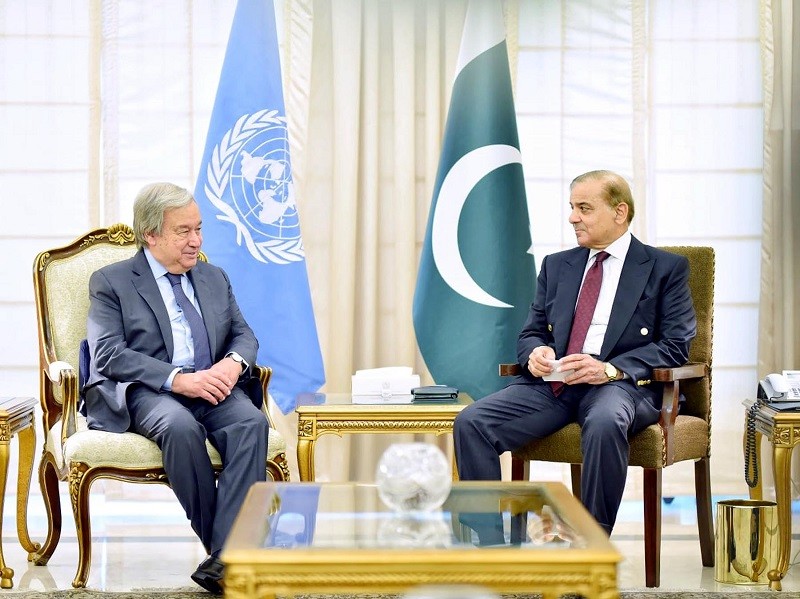 The prime minister also lauded the UN secretary general’s forceful messaging highlighting the linkage of these floods with the impacts of climate change. He added that Antonio Guterres’ leadership and timely intervention had helped put the global spotlight on the serious challenges posed by the catastrophic floods.

Prime Minister Shahbaz Sharif recalled that, with less than 1% of global carbon emissions, Pakistan was among those least responsible for global warming. Yet, it was among the top 10 Countries most severely impacted by climate change.

The prime minister stressed that, in the spirit of climate justice, Pakistan merited support from the international community, especially the industrialized countries, to respond to this climate calamity and to recover and rebuild with enhanced resilience.

The two leaders also discussed Pakistan’s plans for the phase of rehabilitation of the flood affected population and reconstruction of areas devastated by floods.

The prime minister emphasized Pakistan’s resolve to build resilience against future climate shocks including through various projects on adaptation and mitigation with adequate support from the UN system and other international partners.

Recalling his long association with Pakistan, the UN secretary general conveyed his enormous appreciation for the people of Pakistan. He said he was witness to the resilience of the Pakistani people as well as their generosity in helping their compatriots and in hosting millions of Afghan refugees for decades.

The UN Secretary General Antonio Guterres added that he was also deeply moved by devastation and the humanitarian consequences of the massive floods. He assured full support and commitment to Pakistan including for mobilizing international assistance.

The secretary general emphasized that it was not merely about solidarity but a question of justice. He said that apart from the massive support required for rehabilitation and reconstruction, the whole issue of climate change needed to be addressed with the kind of urgency, seriousness and responsibilities that it deserved.

The UN Secretary General Antonio Guterres is on a two-day solidarity visit to Pakistan in the wake of unprecedented rains and floods in the Country.

The UN secretary general will also be travelling to areas most impacted by the floods as part of his visit.

Mati
Mati-Ullah is the Online Editor For DND. He is the real man to handle the team around the Country and get news from them and provide to you instantly.
Share
Facebook
Twitter
Pinterest
WhatsApp
Previous articleUN Chief urges Int’l Community to massively support flood-hit Pakistan
Next articlePakistan to continue to work closely with France: Khawaja Asif