ISLAMABAD, Pakistan: The United Nations Secretary General António Guterres has appealed the International Community that Pakistan needs massive financial support to undertake rescue and relief efforts as well as to meet the challenge of rehabilitation and reconstruction in the wake of devastation caused by recent floods in the Country.

While addressing a Joint News Conference along with Prime Minister Shahbaz Sharif at the National Flood Response Coordination Centre (NFRCC) in Islamabad on Friday, he said that Pakistan is not making any significant contribution to the industrial emissions but it faces major brunt of the Climate Change. 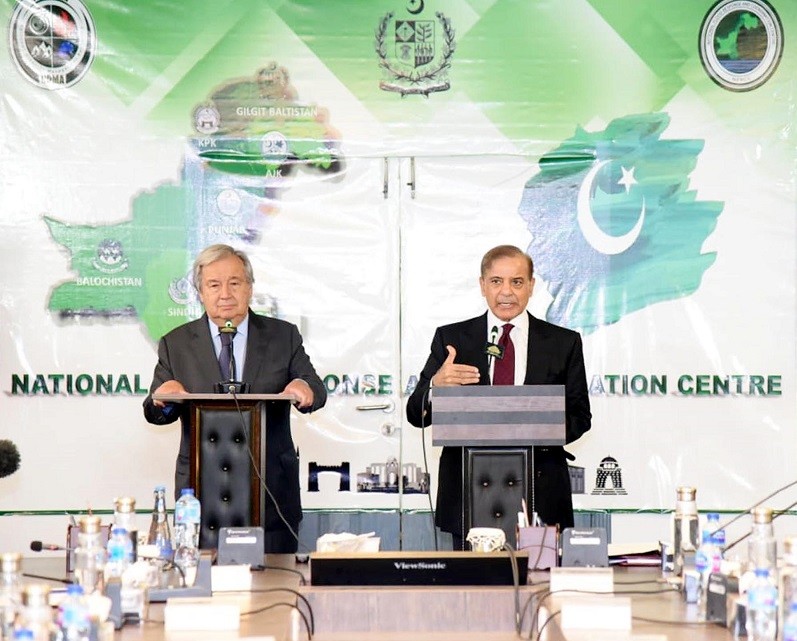 The UN secretary general said that especially, the Countries that make most of the emissions should do justice by providing massive support to the people of Pakistan to meet this calamity.

The secretary general urged the global community to mobilize everything possible to support the people of Pakistan as they have lost their houses, jobs, and crops.

Expressing solidarity with the people of Pakistan, he assured that everyone needs to be mobilized to come out of this crisis.

In his remarks, Prime Minister Shahbaz Sharif thanked the UN secretary general for visiting the flood-affected people of Pakistan, who are facing devastation and destruction due to negative impact of the Climate Change.

Earlier at the NFRCC, the UN Secretary General António Guterres and Prime Minister Shahbaz Sharif were given a detailed briefing by the Coordinator NFRCC Major General Zafar Iqbal about the flood situation and rescue and relief activities in the affected areas.

Expressing solidarity with the flood victims, the UN secretary general said that he will do his best to raise awareness in the International Community about the current situation in Pakistan and to mobilize the full UN system in support of the Country.

António Guterres was also appreciative of the rescue and relief activities being carried out in the flood ravaged areas.

Mati
Mati-Ullah is the Online Editor For DND. He is the real man to handle the team around the Country and get news from them and provide to you instantly.
Share
Facebook
Twitter
Pinterest
WhatsApp
Previous articlePTV Sports Live Pakistan vs Sri Lanka Asia Cup 2022 Super 4
Next articlePM Shahbaz Sharif hails UN secretary general’s strong support for Pakistan