ISLAMABAD, Pakistan: Health advocates have demanded of Prime Minister Imran Khan to take notice of the government’s failure to impose a health levy on tobacco and investigate the reason as to why the decision of the Federal Cabinet could not be implemented.

In a Press Conference at National Press Club (NPC) in Islamabad on Tuesday, the Executive Director Society for Protection of Rights of the Child (SPARC) Sajjad Ahmed Cheema said that the Prime Minister must intervene to ensure the imposition of the Health Levy bill passed by Cabinet back in 2019 without any further delay.

Sajjad Ahmed Cheema said that owing to the lack of implementation of the bill, the country losses Rs 55 billion annually, while the imposition of a Health levy on cigarettes and sugary drinks would help generate Rs 55 billion in revenue which could be used for healthcare infrastructure. 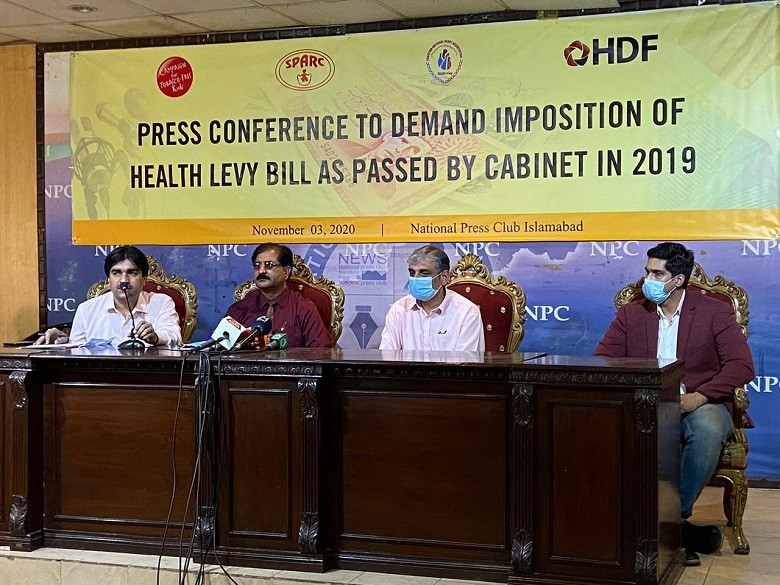 Cheema informed media that in June 2019, the Federal Cabinet decided to implement a health levy on tobacco products.

The Executive Director SPARC said that the move would have increased the price of tobacco products and make them unaffordable for low-income groups and children.

However, this bill has been going back and forth between the Federal Board of Revenue (FBR), the Health Ministry, and the Finance Ministry. The FBR has mentioned in writing that it doesn’t have any issues with the implementation of the health levy.

Hence, the delay in this matter is a disappointing shock because it shows that public health is not a priority matter for our government.

The Secretary-General of Pakistan National Heart Association Chaudhry Sana Ullah Ghuman reminded the government that Pakistan is a signatory of the Framework Convention on Tobacco Control (FCTC), and the prime minister cannot meet representatives of the Tobacco Industry as it is a violation of 5.3 of FCTC. He said that children are the most affected group from tobacco consumption.

Therefore, we hope that he’ll take immediate notice of the delay in the implementation of the healthy levy and take this necessary step to safeguard the health of millions of children in Pakistan, he added.

The CEO of Human Development Foundation (HDF) Colonel (retd) Azhar Saleem said that due to the delay in the implementation of the health levy, the national exchequer suffered a loss of Rs 55 billion.

Colonel (retd) Azhar Saleem said that the COVID-19 pandemic made everyone realize once again that our existing resources are inadequate to counter any health emergency. He said that this amount could have been utilized for pandemic control and guarantee better health and living standards for our citizens.

Mati
Mati-Ullah is the Online Editor For DND. He is the real man to handle the team around the Country and get news from them and provide to you instantly.
Share
Facebook
Twitter
Pinterest
WhatsApp
Previous articlerealme launches 6 new products including realme 7 Pro
Next articlePakistan rejects Indian Defence Minister’s unwarranted comments regarding Gilgit-Baltistan