“International community has to play its due role to impress upon India to adhere to the UN Security Council resolutions for final determination of the will of the people of the Indian Occupied Jammu & Kashmir,” the High Commissioner of Pakistan to Canada Raza Bashir Tarar said while addressing the event.

The High Commissioner said that the Indian Bharatiya Janata Party (BJP) government’s aim is to build a Hindu “Rashtra” (Kingdom). He said that thousands of people including political leaders, professionals and activists have been arrested, and the people do not have access to hospitals, emergency services and even life-saving drugs. He said that food supplies have dwindled whereas 13,000 young boys have been abducted and dispersed to prisons all over India. 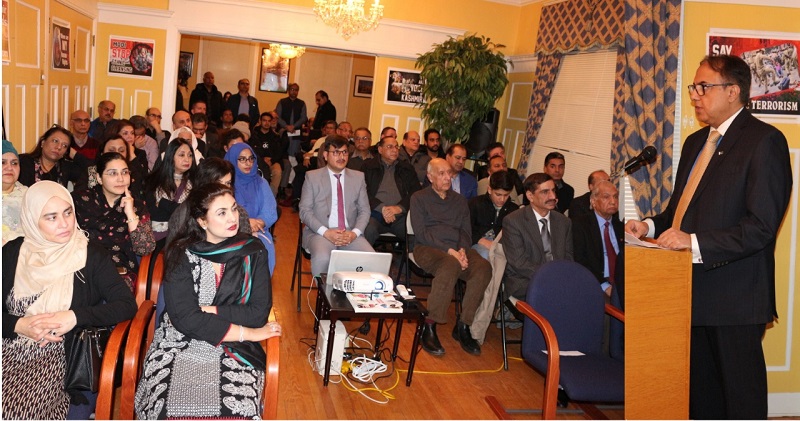 The High Commissioner reaffirmed Pakistan’s unstinted political, diplomatic and moral support for the valiant Kashmiri people in their just struggle for human dignity and their inalienable right to self-determination in accordance with the United Nations Security Council Resolutions.

Raza Bashir Tarar appreciated Pakistani Canadians who have spared no efforts to protest the Indian brutalities in Kashmir and sensitize their compatriots about the ethical, moral and humanitarian disaster that is prevailing and worsening in Indian Occupied Jammu and Kashmir.

The prominent analysts Fareed Khan and Rehana Hashmi talked about violations of the Universal Declaration of Human Rights and the Genocide Convention and the threat being posed to peace in South Asia and beyond by the Indian deliberations.

Earlier, the special messages of President Dr Arif Alvi, Prime Minister Imran Khan and the Foreign Minister Shah Mahmood Qureshi, on the occasion of Kashmir Solidarity Day, were read out by the High Commissioner.

Mati
Mati-Ullah is the Online Editor For DND. He is the real man to handle the team around the Country and get news from them and provide to you instantly.
Share
Facebook
Twitter
Pinterest
WhatsApp
Previous articlePTCL Smart TV Channels List Complete | 2020 | All You Can Watch
Next article5th February observed as Kashmir Solidarity Day in Ukraine