One doctor for 877 persons in Pakistan

ISLAMABAD, Pakistan: There is one doctor for every 877 persons in Pakistan, the Senate was told on Tuesday.

Sharing the present doctor-population ratio in Pakistan as per the number of registered physicians including specialists on December 31, 2021, the Minister for National Health Services, Regulations and Coordination apprised that the situation in Balochistan and Khyber Pakhtunkhwa is worse than in other parts of Pakistan.

The House was told that the doctor-population ratio in Balochistan and Khyber Pakhtunkhwa is one doctor for 1,794 people and 1,064 respectively.

Province wise breakdown is as following: 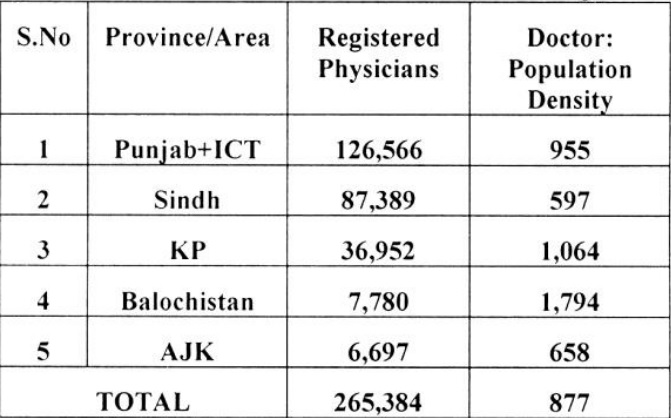 The minister said that one of the main targets of National HRH Vision and SDGs is ‘essential/skilled health professional (physicians, nurses, lady health visitors and midwives) density’ to be minimum of 44.5 per 10,000 population which is necessary to achieve the Universal Health Coverage.

In addition, the Senate was told that the Ministry of National Health for National Health Services, Regulations, & Coordination is continuously making efforts to improve health service delivery across the Country. One such effort is the National Health Support Project (NHSP) to be implemented with World Bank support.

It is to be noted that the NHSP is currently in the preliminary phase only and discussions are being held with relevant stakeholders in order to agree on the modalities for moving forward. Initial amount earmarked for the project is US$ 430 million.

Once agreed and finalized, the NHSP will be implemented by the Provincial/ Area Health Departments and the (MoNHSRC) will have a coordinating role.

The criteria to be adopted for the implementation of the NHSP will be determined by the implementation authorities i.e., Provincial/Area Health Departments based on the recently agreed and approved National/Provincial Universal Health Coverage (UHC) – Benefit Package (BP) /Essential Packages of Health Services (EPHS).

All You Need To Know About Diphtheria Outbreak In Pakistan