ISLAMABAD: Mushaal Hussein Mullick, the wife of Chairman Jammu and Kashmir Liberation Front Yasin Malik, has felicitated Joe Biden for becoming the 46th US President and Vice President Kamala Harris, and expressed optimism that they will play their role to liberate Kashmiris Indian Donald Trump as he did in the United States.

While addressing a press conference along with representatives of the Pakistan Bar Council (PBC) in Islamabad on Thursday, Mushaal Mullick dubbed Modi as Donald Trump of India, who like him sowed the seeds of hatred, odium, and division in India.

Mushaal said that the fascist Modi broke all previous records of barbarism and terrorism in the Indian Occupied Kashmir because he was enjoying the full backing of Donald Trump since they both are radicals and gave little value to human rights and humanity. 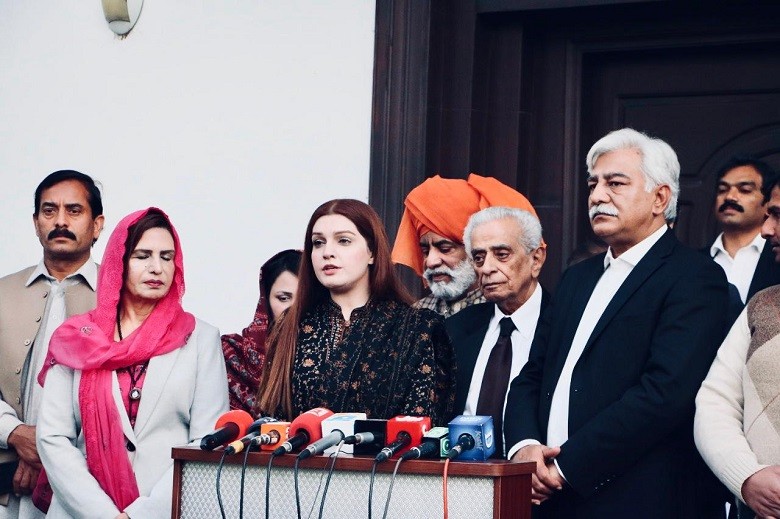 Mushaal Mullick, who is also Chairperson of Peace and Culture Organization, hoped that like Joe Biden issued orders to reverse a number of Donald Trump’s divisive policies including returning to global health body, joining climate pact, and rescinding the Muslim ban on the first day of his office, he will also take practical steps to liberate Kashmiri people from Indian slavery.

The Hurriyat leader said that the world had never seen such a division in the US as manifested during Trump’s era and the same is the case in India where all monitories especially the Muslims have been subjecting to Modi’s brutalities.

Mushaal also said that no American knew better the situation than Joe Biden; hence, the people of the blood-riddled valley were quite hopeful that he would take tangible measures to resolve the seven-decades long pending issues as per the UN Security Council resolutions and aspirations of the people of the scenic valley.

Further, she also expressed apprehension that the notorious Indian Court could ‘sentence to death’ her husband Yasin Malik in fabricated and false decades-old cases for political mileage and to sabotage the decisive freedom movement in the occupied valley.

The Chairperson of Peace and Culture Organization said that the Indian government reopened decades-old old cases against Yasin Malik in order to silence him who emerged as the true and powerful voice of Kashmir’s struggle for the right to self-determination.

Mushaal said that he was kept in the notorious Tihar Jail like other Kashmiri leaders, fearing he might be sentenced in the fake and fabricated cases as Indian on-going efforts to put a dent into freedom movement which is entering into a decisive phase.

Mushaal Mullick went on to say that the Indian government has been committing genocide of Kashmiri people but the world looks at the gruesome situation as a silent spectator. She said that since it is a legal issue; hence, the Lawyers Community should standby us and the Foreign Office should also look into the issue as well.

The Kashmir leader warned that leaders like Yasin Malik are born once in a century and if anything happens to him it could put the regional peace at risk.

“I appeal to the Pakistan Bar Council to take steps to ensure the safe release of her husband, whose life is at stake because the Indian government is adamant of his ‘judicial murder,” she said.

Mati
Mati-Ullah is the Online Editor For DND. He is the real man to handle the team around the Country and get news from them and provide to you instantly.
Share
Facebook
Twitter
Pinterest
WhatsApp
Previous articleConnivance of Indian Media and RAW puts regional peace into danger
Next articleUN adopts Pakistan-sponsored resolution on protection of religious sites