Life of Prophet Muhammad (PBUH) a beacon of light for mankind: Mushaal

ISLAMABAD, Pakistan: Mushaal Hussein Mullick, the wife of detained Hurriyat leader Yasin Malik, said that the life of Hazrat Muhammad (Peace Be Upon Him) is a beacon for mankind who preached love and humanity throughout his life.

While inaugurating the calligraphy exhibition based on Ism-e-Mubarak Hazrat Muhammad (PBUH) during a visit to the Punjab Council of Arts in Rawalpindi, she said that Islam is a peaceful religion and Holy Prophet preached Islam with love.

The Chairperson Peace and Culture Organization said that we can succeed in this world and in the hereafter only by following the guidance of Holy Prophet Hazrat Muhammad (PBUH).

It is a dire need of the hour to introduce the teaching of the Holy Prophet (PBUH) to the world so that the opinion of the west may change about Prophet Muhammad (PBUH) and Islam, she added. 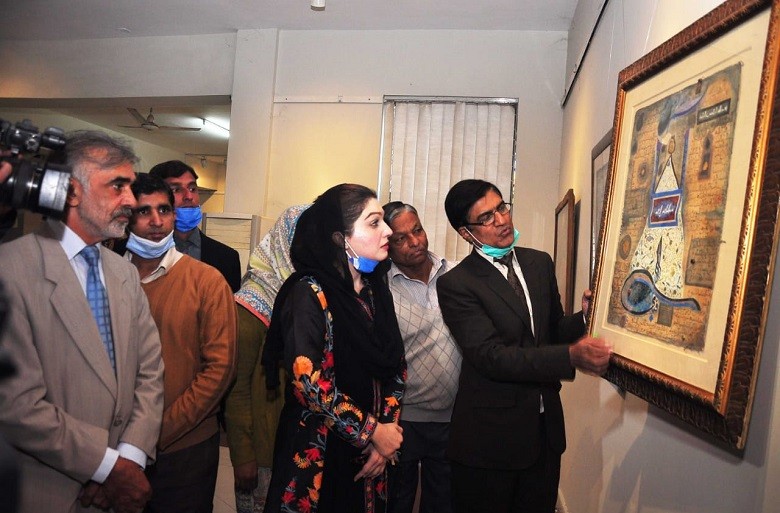 Mushaal further said that Kashmiris are being punished by fascist Indian forces for being Muslims. She said that the whole world is ignoring the Indian atrocities on Kashmiri Muslims.

The Chairperson said that over eight million people are imprisoned in the Indian occupied valley but the world observed criminal silence.

Mushaal Mullick also strongly condemned the blasphemous sketches in France and the statement of the French President.

The Deputy Director Arts Council Sajjad Hussain said that Muslims from all over the world should bring the true picture of the Quran and Sunnah before the Western world.

It is pertinent to note that hundreds of people turned to the Arts Council to see a special calligraphy exhibition based on Ism-e-Muhammad.

The Punjab Council of Arts is celebrating Hafta Shan-e-Rahmatulil Alameen on the directions of the Punjab government and the calligraphy exhibition will continue until November.

Mati
Mati-Ullah is the Online Editor For DND. He is the real man to handle the team around the Country and get news from them and provide to you instantly.
Share
Facebook
Twitter
Pinterest
WhatsApp
Previous articlePropaganda- The Prevalent Form of Conflict
Next articleElectronic Voting in Pakistan – PM Imran Khan Reveals a Great News