Matters of mutual interest such as tourism, education, and culture were discussed during the meeting.

Furthermore, future collaborations in the field of student exchange program and media presence were stressed upon. 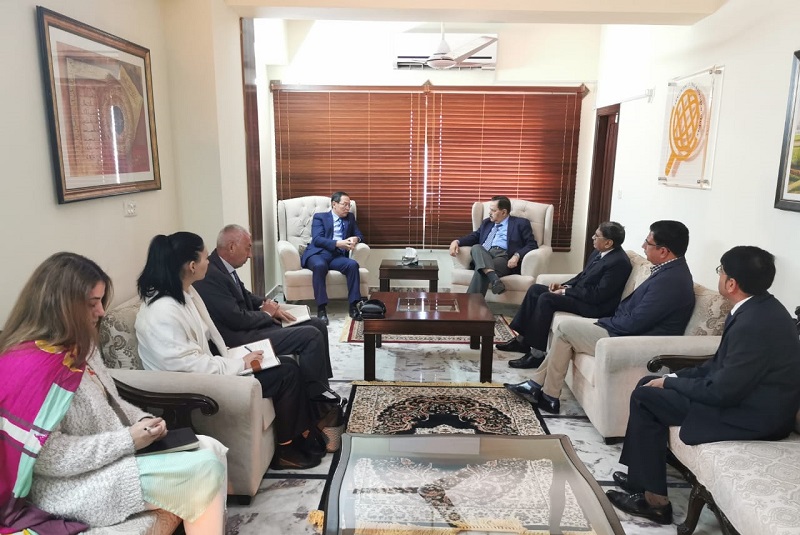 The Kyrgyz Ambassador His Excellency Erik Beishembiev recognized and appreciated the active role played by the CGSS in regional connectivity and specifically in improving bilateral relations between Pakistan and Kyrgyz Republic.

The meeting was also attended by the Senior Member Advisory Board CGSS Ashfaq Ahmed Gondal, the Deputy Head of Mission at the Kyrgyz Embassy in Islamabad Aibek Tilebaliev, the Consul/Economic Counselor at the Kyrgyz Embassy in Islamabad Sabina Mukhamedianova, the Executive Director CGSS Lieutenant Colonel (retd) Khalid Taimur Akram, the Director CGSS Mehreen, and the Public Relations (PR) and Communication Officer at CGSS Palwasha Nawaz.

Earlier on Tuesday, the Ambassador of the Republic of Uzbekistan to Pakistan His Excellency Furqat A Sidikov also visited the CGSS and met Major General (retd) Syed Khalid Amir Jaffery.

During the meeting, areas of mutual interest including research and education were discussed. Furthermore, the need of international profiling of students and professionals was stressed upon.

In addition to these, the opportunities for students to build their experience through the CGSS were acknowledged.

Dr Nasrullah Mirza acknowledged the role of the CGSS in education as well as other sectors and hoped for future collaborations.

Mati
Mati-Ullah is the Online Editor For DND. He is the real man to handle the team around the Country and get news from them and provide to you instantly.
Share
Facebook
Twitter
Pinterest
WhatsApp
Previous articlePakistan’s Ambassador Syed Sajjad Haider meets Amir of Kuwait
Next articleQureshi discusses important issues with British foreign secretary on phone