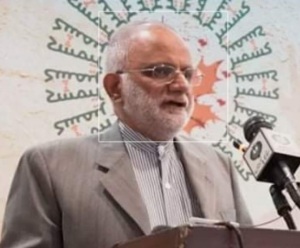 ISLAMABAD, Pakistan: The Executive Director of the Kashmir Media Service (KMS) Shaikh Tajammul-ul-Islam passed away in Islamabad on Sunday night at the age of 67, the KMS reported.

Shaikh Tajammul-ul-Islam left behind his widow and a daughter.

The champion of the Kashmir cause, veteran journalist and intellectual Shaikh Tajammul-ul-Islam belonged to the Indian Illegally Occupied Jammu and Kashmir (IIOJK). He did his LLB from Kashmir University, Srinagar in 1975 and M.A Urdu from the same University in 1980.

During his student life, he worked as Nazim-e-Aala (President) of Islami Jamiat-e-Talaba in IIOJK from 1979 to 1984.

Credited with institutionalising journalism, he worked as the Chief Editor Daily Azaan and th Editor of several newspapers, weekly and fortnightly magazines in IIOJK from 1973 to 1980. At the same time, he contributed a lot to Kashmir movement. He practiced law in Srinagar from 1975-1984.

Over his decades’ career, Shaikh Tajammul-ul-Islam remained an advocate of Kashmiris’ right to self-determination as acknowledged by the United Nations.

In the decade of 1970s, two important events happened which sent a shock wave among Kashmiri Muslims. One was the Fall of Dhaka in 1971 and the other was the sighing of Indira-Abdullah accord. Now India had started waging propaganda that Pakistan was no more capable of supporting the Kashmiris’ freedom struggle. Also the 1975 accord had further demoralized the Kashmiri people. In order to break the ice, Shaikh Tajammul-ul-Islam planned to convene and international conference on Kashmir in 1982. Although, India had banned the event, yet the preparations for the conference rejuvenated the Kashmiri people, particularly the youth to carry forward their struggle for right to self-determination, at all costs.

Now, he became in the spotlight and New Delhi had started creating hurdles for him to continue his stay in occupied Jammu and Kashmir. Even he was arrested several times between 1974 and 1984. As the noose was tightened around him for his pro-freedom views, he migrated to Nepal.

During his stay in Nepal, he founded Islamic Savak Sangh, now the largest Muslim organization of the Nepali Muslims. He managed scholarships for deserving Muslim students at the platform of the organization. While staying in Kathmandu, he also served as Coordinator of Muslim Student Organization in South Asia under International Islamic Federation of Student Organizations (IIFSO).

After migration to Pakistan, Shaikh Tajammul-ul-Islam worked with News Section of PTV from 1998 to 1999. He headed the Institute of Kashmir Affairs from 1992 to 2000.

Later, he joined Kashmir Media Service as the Executive Director in 1999 and remained associated with it till his last breath. He was also Chief Editor of Kashmir Insight magazine.

Shaikh Tajammul participated in various conferences and seminars on Kashmir at the international level and in Pakistan and delivered speeches and wrote articles and analyses in English and Urdu on Kashmir. He always supported a resolution of the Kashmir dispute based on justice. He was highly respected in journalistic circles for his integrity and intellectual acumen.