Kashmir Caged: Only stray dogs and birds are seen in Srinagar, reports Sputnik

“Indian Kashmiris woke to the blaring sounds of loudspeakers Tuesday morning, with patrol parties announcing that everyone should remain indoors. Videos emerging from the region show stray dogs and birds have taken over the streets that are otherwise packed with humans on a normal day,” reported Sputnik. 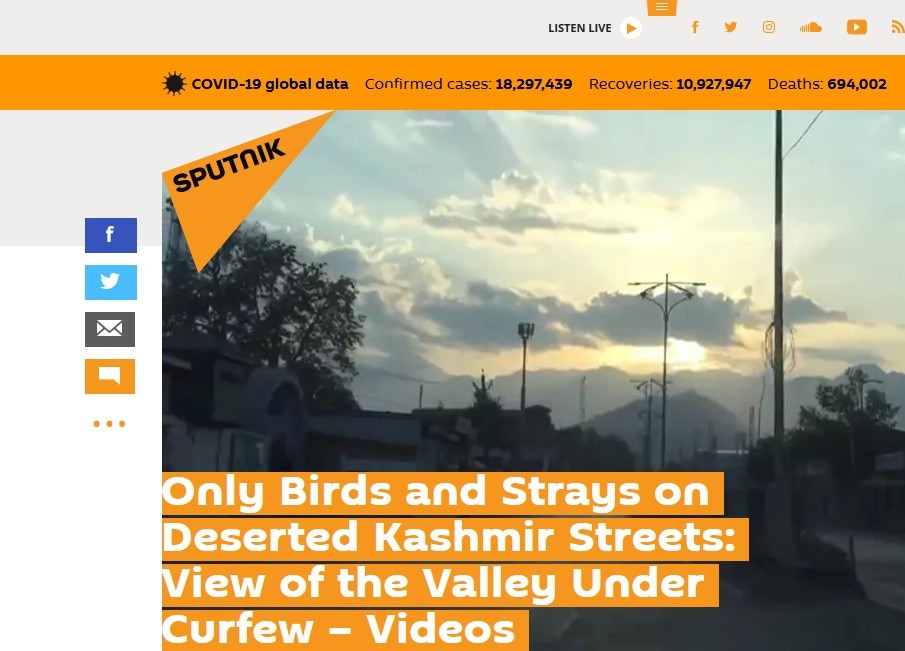 It may be remembered that complete curfew has been imposed ahead of the first anniversary of revocation of Article370  as Administration fears violence on 5 August 2020, therefore, imposes complete restrictions on public movements. Barricades have been laid out at different points to ensure strict compliance with the two-day curfew order for 4-5 August, imposed in anticipation of protests on the first anniversary of the revocation of Kashmir’s decades-old semi-autonomy.

Meanwhile, Eurasia News reports that large-scale arrests of Kashmiri youth have been reported in the last one week and two extra brigades of Indian Army have been moved additionally to the valley to join already deployed 900,000 Indian troops.

Meanwhile, the Executive Editor of Kashmir Times Anuradha Bhasin in her interview said on Tuesday that new media policy is (was) extremely frightening and it empowered the government to decide what fake news is, what anti-national is, to take action against journalists, to criminalise them, to run background checks of all journalists, all newspaper organisations.