KYIV, Ukraine: The Embassy of Pakistan in Kyiv observed 27th October as the Kashmir Black Day with the aim to highlight the illegal annexation of Jammu and Kashmir by Indian forces in October 1947 and to express solidarity with the innocent Kashmiri people who are being subjected to the worst Indian atrocities for the last more than seventy years.

The event started with the recitation of the Holy Quran. Afterward, the messages of President Dr. Arif Alvi and Prime Minister Imran Khan were read out on this occasion.

In his remarks, Pakistan’s Ambassador to Ukraine Zahid Mubashir Sheikh once again reminded the audience that it was on this unfortunate day in Indian Illegally Occupied Jammu and Kashmir’s (IIOJK) history when the Indian occupation forces landed in Kashmir and subjugated the Kashmiri people against their will and wishes.

The Kashmiri people revolted against this illegal annexation and on January 1, 1948 India took the issue of Kashmir for settlement to the United Nation.

The ambassador said that the United Nations’ Security Council passed two resolutions, one on August 13, 1948 and the second on January 5, 1949. Including other issues like ceasefire, demilitarization, etc. these resolutions said that the future of Kashmir will be decided by the people of Kashmir through a free and fair plebiscite to be held under the auspices of the United Nations. Both India and Pakistan accepted these resolutions. However, true to its duplicitous nature, India, later on, backtracked from its commitment towards holding a free and fair plebiscite as per UNSC resolutions.

The ambassador further said that in order to complete the incomplete project of the annexation of Kashmir, India on 5th August 2019, in gross violation of international laws and relevant UNSC resolutions, revoked article 370 and 35A which had granted the people of Kashmir some degree of autonomy.

Ambassador Zahid Mubashir Sheikh also highlighted the grave human rights violations and the reign of tyranny, especially in the aftermath of revocation of article 370 and 35A, being imposed on the innocent Kashmiris by the Indian Occupation Forces.

The ambassador said that since August 5, 2019 the Indian security forces have imposed a complete lockdown of the valley and illegal searches, investigations, arrests, and detentions have become a norm. 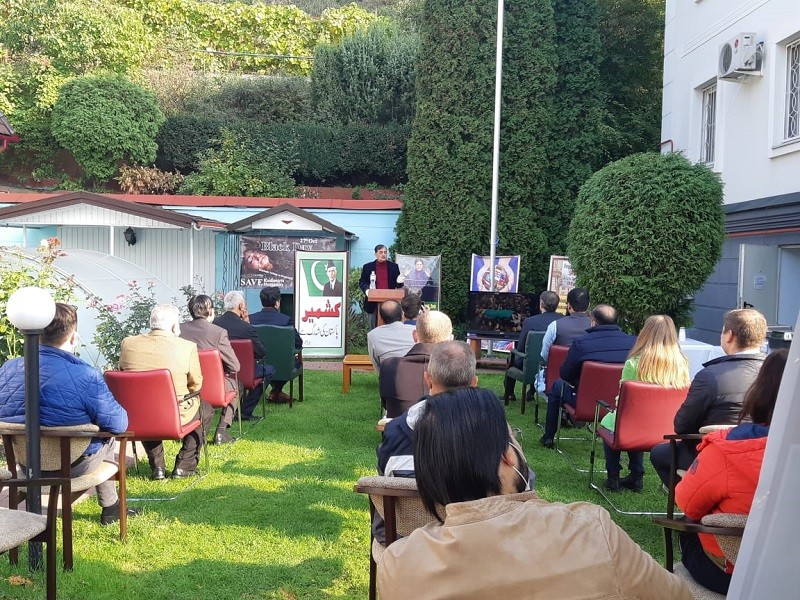 It was further added the government of Pakistan condemns the illegal, unilateral, reckless, and coercive attempt by India to alter the disputed status of IIOJK as enshrined in the UNSC Resolutions.

Pakistan will continue to provide moral, diplomatic, and political support to the Kashmiri people till the fate of IIOJK is decided according to the UNSC resolutions and wishes of its people.

The ambassador expressed that due to Modi’s government extreme, desperate, and illegal actions of August 5, 2019, the Kashmir dispute has once again become the focus of the attention of the international community.

Since August 5 last year, the Kashmir issue has been raised and discussed thrice in the United Nations which has once again supported Pakistan’s claim that IIOJK is an internationally recognized disputed territory, on the agenda of the UN, to be resolved as per the wishes of Kashmiris and UNSC resolutions.

The world has taken notice of the Indian atrocities and human rights violations in the IIOJK.

The UN Secretary-General, UN High Commissioner for Human Rights, the United Nation’s Rights Experts, Human Rights Watch, Amnesty International, the Parliament of European Union, and OIC have expressed deep concern over the human rights violations in Kashmir and have called on India to lift the curfew, remove communication blackout, respect and protect human rights of the Kashmiri people.