ISLAMABAD, Pakistan: A Kashmir Bicycle Rally will be held in Islamabad on January 31, 2020 (Friday) to commemorate Kashmir Solidarity Day.

The rally is being organized under the auspices of Islamabad Capital Territory (ICT) administration, Metropolitan Corporation Islamabad (MCI), and Agency21 International.

It will kick off from Zero Point Interchange at 02:30 pm on Friday and end at Faial Mosque.

The aspiring participants have been asked to bring their own bicycles.

The Kashmir Bicycle Rally will be held in connection with Kashmir Solidarity Day to be observed across the Country on February 5 in a befitting manner. 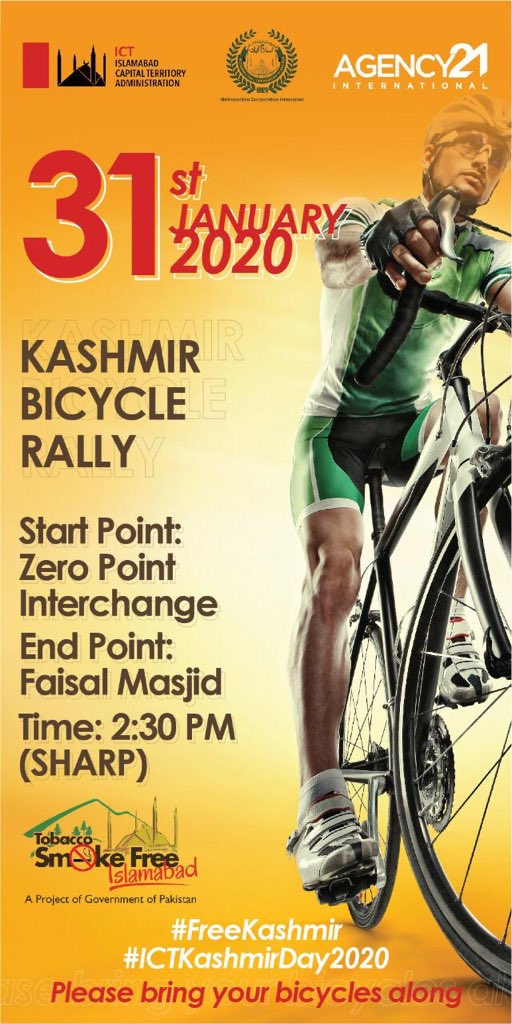 In a Tweet on January 24, Prime Minister Imran Khan urged Pakistanis both at home and abroad to come out on February 5 in support of the eight million Kashmiris.

The prime minister said that Kashmiris have been besieged by 900,000 soldiers of India’s fascist Modi regime for almost six months.

Mati
Mati-Ullah is the Online Editor For DND. He is the real man to handle the team around the Country and get news from them and provide to you instantly.
Share
Facebook
Twitter
Pinterest
WhatsApp
Previous articleJazz Golf Tournament 2020 Tees Off In Karachi
Next articlePalestine donates Mobile Health Unit to Pakistan