Is Imran Khan an Avatar or an Evil?

Today sitting in National Assembly Cafeteria along with old guards (old friends with whom I had been working together in the field as a reporter) we had been discussing cult-like personalities we had in history and some of my friends were of the view that former Prime Minister Imran Khan has become a cult leader. I had my opinion that he is a man of exceptional qualities. I consider him one of the most fortunate men we ever had in politics. Luck is his exceptional quality. A man who was tried and penalized for being a father of an illegitimate daughter by the Los Angeles Superior Court Commissioner Anthony Jones got the title of Sadiq aur Ameen (Truthful and Honest) from the highest court of Pakistan. Is it not an extraordinary game of luck?

We were remembering that Angeles Superior Court Commissioner Anthony Jones on August 13, 1997, ruled that Khan is (was) the legal father of his ex-lover’s child. He issued the default judgment after Khan refused to take a paternity test in UK or USA and his attorneys failed to show up for the court proceeding. The paternity suit was filed by Sita White, of Beverly Hills, on behalf of her daughter, Tyrian Jade.

Since in politics, Imran Khan raised himself as a person who has zero tolerance for corruption and he has become an icon for his fight against corruption although his father was removed from government service under corruption charges in the mid-70s.  His followers love him so much that nobody ever asked him what were circumstances of the termination of his father from service along with 313 top most corrupt officials sent home by the then Prime Minister Zulfiqar Ali Bhutto.

The rise of Imran Khan is exceptional. A party that got only 35 seats in the 2013 general elections became the largest party in the 2018 general elections in National Assembly. Such rise consolidated the trust of his followers in him and they praise him like an avatar (a manifestation of a deity or released soul in bodily form on earth; an incarnate divine teacher) who has been sent to safeguard the future of Pakistan. Being a student of history and philosophy, I always believe that Greek gods were made by Homer through his everlasting work—-Iliad. Who was Homer in the case of Imran Khan? is a question to probe.

I remember on November 15, 2007, he was mistreated, manhandled, and detained on the campus of Punjab University Lahore by activists of the Islami Jamiat Talaba and was requesting media persons present there to help him out of the clutches of students. Now he is so powerful that the state of Pakistan is shy to touch him although he has been abusing state institutions. 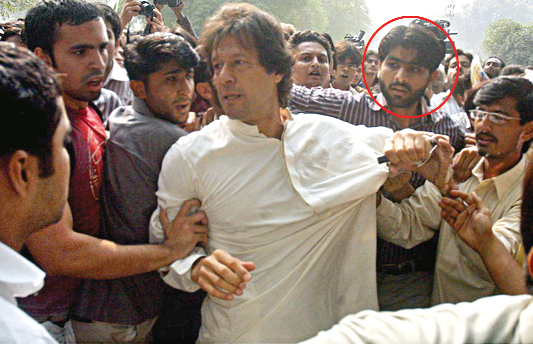 According to my understanding, he got the best available team for narrative building and propaganda and practically knock down his opponents in the media sphere. I have already mentioned in one of my articles that PTI is matchless in building narratives and had been portraying people as thieves, dishonest, and traitors successfully by creating a situation of “approximate Truth”. I fear PTI is already on the way to defaming Pakistan Army through its time-tested propaganda tools. Any communication can be broken into three parts: the sender, the message, and the audience. The best propaganda takes place when the audience must not only get the message but must interpret the message in the way the sender has intended. PTI propagandists create syllogism that is logically True but Factually not true. PTI propagandists use proximate Truth to tag person A as a “traitor” because this is impossible for a “traitor” to justify that he is not.

I believe that PTI propagandists tactfully use Deductive Reasoning to reach a logical true conclusion of their own choice in the process of developing Approximate Truth because through this lethal technique their given Approximate Truth is testified through a logical process. Deductive reasoning, or deduction, starts out with a general statement, or hypothesis, and examines the possibilities to reach a specific, logical conclusion— Syllogism.

One of my colleagues indicated that Imran Khan has an art of influencing people, had wonderful relations with them, and then ended up in a bitter circumstance but he always successfully portrays that he was not at fault for any mess up in relations but rather his friends were. I believe that his self-confidence always helps him to tell others that he cannot be wrong and the world is full of cheaters and liars and he is always on the right side of the story.

The recent examples are Jahangir Tareen and Aleem Khan and many others who left him before voting of no-confidence that voted him out of the office of Prime Minister.  For him whosoever leaves him is a cheater as Aleem Khan and Tareen are. He has a long history of turbulent relations with his friends and one example is his relations with his cousin Majid Khan who helped Imran Khan in his cricket career but Imran threw him out of the National cricket team when he became Captain although that time Majid Khan was a hero and star for the Pakistani nation. Their relationship was bitter for years. Imran Khan in one of his interviews said that he (Majid Khan) had no good performance and that was the reason he dropped him from the team.

Another example could be his relationship with Sita White which ended in a Court fight.

His relations were exemplary with Jemima Goldsmith but ended with a divorce and the case was the same with his ex-wife Reham Khan. Nonetheless, in all cases, Khan justified himself that he was not on the wrong side but something happened and the partnership ended. He is so fortunate that even having this track record, everybody wishes to be his friend.

I personally appreciate his skills to shun the burden that went wrong in relationships as well as in politics. He has the art of transferring burdens to others and justifies himself. Imran Khan was a staunch supporter of Gen (retd) Musharraf during his referendum but now he accuses Gen Musharraf of selling out sovereignty of Pakistan to the United States and blaming Musharraf for killing thousands of innocent Pakistani in the war on terror that according to Imran Khan was a US war pitched in Pakistani soil. He has a long list of friends who had been helping him out in politics but Khan left them including former bureaucrat Tasneem Noorani and former justice Wajihuddin Ahmed. They departed from PTI in unpleasant circumstances. Imran Khan blamed them for not being honest with the PTI cause. We remember his closest friend Naeemul Haque left Islamabad with a heavy heart when he was seriously ill and fighting against cancer. He died in Aga Khan Hospital in Karachi and Imran Khan did not attend his funeral although in a Twitter message he said that he has lost his oldest friend. Khan did not give any reason for his absence from the funeral of his oldest friend. A dead man is of no use–.

There is a long list of those who joined him, became closer to him, and then departed unceremoniously. His habit of changing opinions about people remains a serious problem for him in politics. He had a very high opinion about former justice Fakhruddin G. Ebrahim and Imran Khan was instrumental in making Fakhruddin G. Ebrahim the Chief Election Commissioner of Pakistan but then criticized him when Khan failed to get majority seats and claimed that elections were rigged under Fakhruddin G. Ebrahim.

In the recent past, he accepted sitting Chief Election Commissioner Sikandar Sultan Raja by stating he is (was) an honest and excellent person but now he is blaming Sikandar Sultan Raja for being an anti-PTI person because PTI foreign funding case is not going well in the favor of Imran Khan. So one can understand that his unpleasant relations with COAS Gen Qamar Bajwa are not unexpected though he had been praising Gen Bajwa for his stance of upholding democratic institutions and he gave him an extension in his service too. Now the same COAS is under the direct attack of PTI leadership. I strongly believe that living with Imran Khan has only one rule—— he is always right and he must be successful at any cost.

Is Imran Khan a victim of narcissistic personality disorder?  —-It may be true and it may not be true. However, there are several similarities he has with patients of this kind of disorder. Patients have an inflated sense of their own importance, a deep need for excessive attention and admiration, troubled relationships, and a lack of empathy for others. But behind this mask of extreme confidence lies a fragile self-esteem that’s vulnerable to the slightest criticism. History has testified that narcissists are carefree people who do not think about the consequences of their decisions and no institution or individual is more respectful and important than their ego. History also teaches us that the weapon of Hate is always used by narcissists to gain more power over followers.

Hate amidst both sides, wading into the onslaught, flooding men with pain. Iliad—-Homer