The International Eurasian Press Fund (IEPF) has appealed to the United Nations Human Rights Council (UNHRC) regarding the failure of the Armenian government to hand over the maps of landmines in the liberated areas to Azerbaijan.

The appeal will be released before the next meeting of the Council in June, Eurasia Diary reported.

It should be noted that on March 31, the IEPF and a group of civil society organizations operating in the war-torn regions of Azerbaijan appealed to UN agencies and international organizations to demand the maps of Azerbaijani territories mined by the Armenian military units.

On April 8, these organizations also prepared a petition on the website of www.change.org to protest the nearly 30-year occupation of Nagorno-Karabakh and surrounding regions of Azerbaijan, as well as the serious mining of territories during the withdrawal of Armenian troops after the end of armed conflict and their refusal to provide the maps of mined areas. 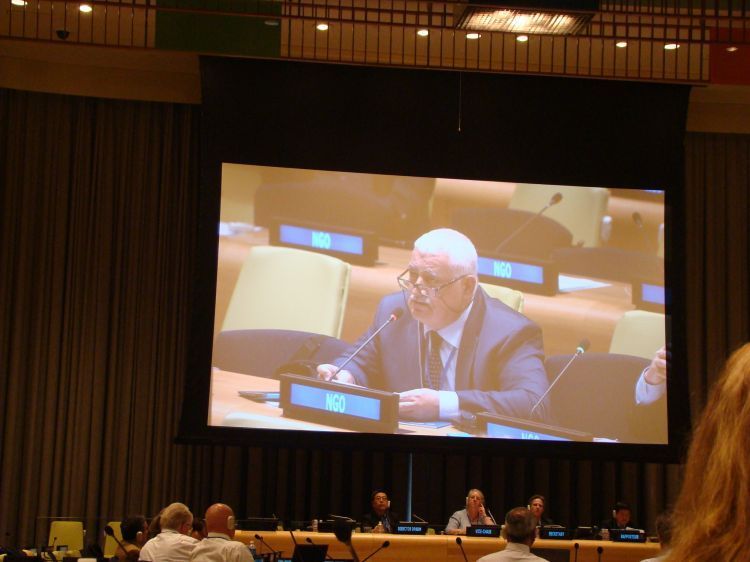 The following is the text of the appeal by the IEPF;

The International Eurasia Press Fund would like to bring to the Human Rights Council’s attention the grave situation of the remaining mines and unexploded ordnances in the liberated territories of the Republic of Azerbaijan.

The human cost of Armenia’s landmines in the liberated territories

In November 2020, the tripartite agreement brought the conflict between Azerbaijan and Armenia to an end. For three decades, Armenia had occupied territory that has been internationally and officially recognized as part of Azerbaijan.

Over the course of the occupation, Armenia laid dangerous landmines on an enormous scale.

These landmines are not only historic. As Armenian forces withdrew from the liberated territories of Azerbaijan following the cessation of hostilities and the tripartite agreement, Armenia deliberately and recklessly planted additional landmines.

Armenia holds maps which reveal the locations of these landmines.

Despite the conflict coming to an end almost 200 days ago, however, Armenia has refused to release the location of the landmines. Every day they delay in handing over these maps is a threat to both Armenians and Azerbaijanis who live in the region.

Armenia’s refusal to provide the location of the landmines is a severe human rights violation.  It threatens the inherent right to life of those who live in areas that are still afflicted by landmines and unexploded ordnance. This includes an estimated 30,000 Armenians.

The threat to life as a result of these mines is clear. As of May 2021, there have been over 120 deaths or injuries as a result of the landmines. 20 Azerbaijani citizens have died as a result of mine explosions since the end of the conflict. Each of these deaths could have been entirely avoidable: the human cost of Armenia’s mines is a clear violation of human rights.

On the 6th of April 2021, the spokesperson for the Armenian Ministry for Foreign Affairs refused to answer questions posed by journalists about why they have not provided the locations of landmines buried by Armenian forces. On this same day, two Azerbaijani servicemen were injured in a mine explosion in the liberated territories while searching for missing colleagues.

This represents a wilful violation of international humanitarian law. Laying mines during the withdrawal from the liberated territories serves no purpose other than to cause as much human suffering as possible to displaced persons returning to their homes.  Refusing to provide the location of the landmines even after the end of the conflict only extends this suffering.

It is worth reiterating that the displaced persons are not the Armed Forces of Azerbaijan. They are tired, emotional families who have been forced from their homes due to conflict. Their sole desire is to return home safely. Some of these families have been displaced for over 30 years. Over 750,000 Azerbaijanis were forced from their homes as a result of the Armenian occupation.

Armenia holds the keys to release these families from fear and allow them a safe path home. Yet they continually refuse to share this information.

In conjunction with four other NGOs based in Azerbaijan, we have publicly petitioned the Government of Armenia and urging them to release the locations of the landmines. This is a concern shared by many: the petition has become one of the most signed on the online petition website, Change.org.

We are aware that the Minister for Foreign Affairs of Azerbaijan has also written to the United Nations Secretary General in recent weeks to raise the issue.

The Government of Azerbaijan has stated that it has the ability to clear the mines, if told where they are. The Azerbaijan National Agency for Mine Action (ANAMA) has started work on this and has cleared over 1,000 mines in an area of over 20 million square metres in the region.

International organisations such as the United Nations Development Programme (UNDP) and the European Union (EU) have provided funding and technical expertise to help clear the region of life-threatening mines and unexploded ordnance. In the past 20 years, ANAMA and UNDP in partnership have cleared over 800,000 mines in Azerbaijan.

Azerbaijan has also looked to its neighbours to help remove dangerous mines from the region, receiving equipment from Turkey in order to do so effectively.

The final piece in the puzzle remains Armenia’s cooperation in releasing the location of the mines.

Sadly, the Government of Armenia refuses to engage on the topic.

Our calls for Armenia to release the minefield maps

Azerbaijan continues to rely on its international partners for support. On 22nd February 2021, the Azerbaijani Foreign Minister asked the United Nations to call on Armenia to release the location of landmines in liberated territories.

IEPF’s work over the last thirty years has focused largely on the support of mine victims in the Caucasus, in particular in Azerbaijan. We have also led many projects in the region to support refugees and IDPS, many of whom have been displaced as a result of dangerous landmine territories. We have seen first-hand the trauma caused by landmines.