Huge procession held in Chile to express solidarity with Kashmiris

SANTIAGO, Chile: For the first time in the history, a huge procession was carried out in Chile in front of the Governor House to express solidarity with the Kashmiris and denounce the barbarism committed by the Indian forces in Indian Illegally Occupied Jammu and Kashmir (IIOJK).

The protestors were showing their solidarity with the people of Indian Illegally Occupied Kashmir who are being deprived of their basic human rights.

They demanded the government of Chile to raise the voice of Kashmiri men, women, and children at all international fora. 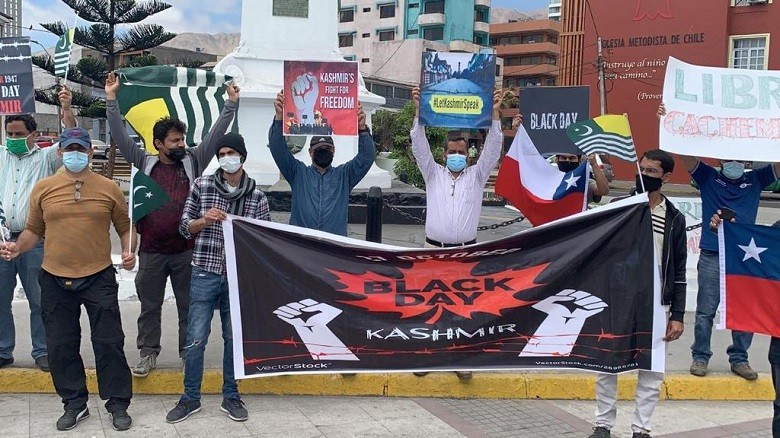 The protestors also asked the UN High Commissioner for Human Rights and the former Chilean President Michelle Bacehlet to forcefully raise the issue of inhumane treatment by the Indian forces to the beleaguered Kashmiris.

Michelle Bacehlet was urged to send a fact-finding mission from her office to the IIOJK to ascertain the Human Rights violations there and discharge her responsibilities.

The Chilean people strongly condemned the Indian actions to change the demography of Jammu and Kashmir.

A large procession was also carried out to mark the Kashmir Black Day annually observed on October 27.

Mati
Mati-Ullah is the Online Editor For DND. He is the real man to handle the team around the Country and get news from them and provide to you instantly.
Share
Facebook
Twitter
Pinterest
WhatsApp
Previous articleKashmir Solidarity Forum of South America holds Inaugural Webinar
Next articleHow to watch Mirzapur Season 2 online for free