Haroon Shahid Came In The Industry By Source?

Haroon Shahid is known for singing and acting, but his wit and sense of humour are the new social media discovery. He is one of those actors who came, the audience saw what all they can do and are now seeing the real side of their talent. With his latest drama, Tamanna, he has finally taken the hold of the audience who have low-key started loving him like the rest of superstars.

However, we adore Haroon for all the other reasons now. In his recent Insta Q&A session, he took a dig at fans while answering their questions with a humorous hint. 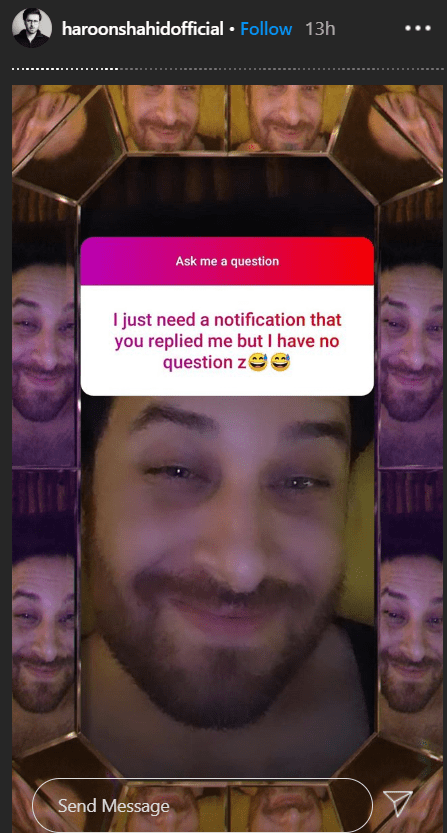 We all know how Insta’s audience is. They will ask silly questions that don’t make any sense. Upon one such question, which asked Haroon what language he spoke, see for yourself what he had to answer:

On various questions asked throughout the session, Haroon shared a glimpse of his personal life as well. He revealed that he has been singing since childhood and wanted to only pursue it, but did not leave his education and did a master’s in economics from Beaconhouse National University.

He also revealed that he and Ahad Raza Mir are second cousins. When talked about where he was born, the Verna star told that he was born in Karachi but lives in Lahore now.

On Nepotism In Lollywood

Nepotism is the new IT in discussion throughout the Indo-Pak region. Someone asked him about an opinion on the matter with respect to the Pakistani entertainment industry, Haroon said that he is also a by-product of it. He went on to say that he had to knock multiple doors of favors to get an entry into the industry. considering Haroon’s personality, he was being sarcastic!

On His Favorite Celebrity

In a multiple set of questions, Haroon was asked who his favourite actress was. He said it was definitely Meera Jee, and in fact, she is also his latest and all-time crush.

Fans can definitely get out of hands. A few fans went to the lengths to ask him if he would go shirtless during the session or show them his shirtless pics. One even had the audacity to ask if he would show his nude pics. Here is his hilarious answer:

There was a lot in Haroon Shahid’s session that gave us a peak on his talent of making people laugh. It was good to see this side of him since he is one of those actors who aren’t mainstream with the public about their personal life, and the raw side of their personality. Hop on to Shahid’s stories to have a little fun in your normal day.