Hamza expressed his concern over Muslims jubilation on the conversion of other places of worship being turned into mosques.

Hamza Ali Abbasi’s has always remained different in expressing his views over certain ongoing issues in the country and this time he has minced no words while speaking about the matter of turning churches to mosques and the construction of temples indirectly addressing the conversion of Hagia Sophia Museum to mosque in his tweet.

While expressing views on the hot issue of turning churches into mosques and construction of temples with reference to the recent incidents, Hamza Ali Abbasi tweeted as follows: 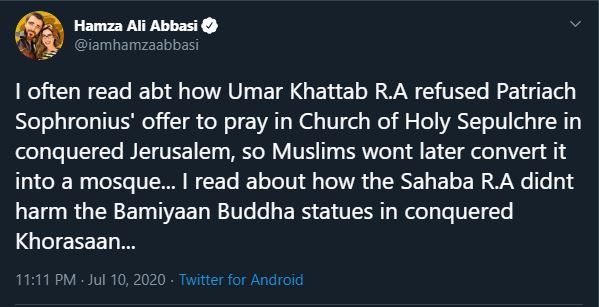 In addition to expressing his perspective, he quoted the translation of a verse from Quran:

According to the details, a top Turkish court struck down the 1934 Cabinet decree that turned Istanbul’s Hagia Sophia into a museum, while opening the way towards using it again as a mosque after an 85-year gap.

Taking it into consideration, the all-time famous Hamza Ali Abbasi took it to Twitter for expressing his perspective. Though he didn’t mention the Hagia Sophia directly, but Hamza expressed his concern over Muslims jubilation on the conversion of other places of worship being turned into mosques. The actor started off by giving the example of the Holy Prophet ‘(SAW) treating the places of worships of other religions with respect during their rule.

“I often read about how Umar Khattab RA refused Patriarch Sophronius’ offer to pray in Church of Holy Sepulchre in conquered Jerusalem, so Muslims won’t later convert it into a mosque. I read about how the Sahaba RA didn’t harm the Bamiyan Buddha statues in conquered Khorasan.”

He went on to say in his extended tweet that, “And then I see those Muslims today. Thumping their chests and proclaiming the victory of Islam by converting churches into mosques and stopping a small mandir from construction. No wonder Allah has given us Muslim the azaab of zillat (humiliation) and mehkoomi (subjection) in this world.”

Previously, Hamza had criticized when the planned construction of a mandir in Islamabad was halted. He said, “Pakistan is not an empire or a kingdom. We Muslims didn’t conquer Pakistan. We are a Muslim majority nation and state. On 14th August 1947, everyone who resided in the boundary of Pakistan became an equal citizen”.

Moreover, he also stated that, “No more hypocrisy, I admit that there is massive religious discrimination in Pakistan.”