Electronic voting machines to be introduced in next Elections: PM Imran Khan

ISLAMABAD, Pakistan: Prime Minister Imran Khan has said that the government has decided to bring electoral reforms to ensure complete transparency in elections.

Speaking in the National Assembly on Saturday after winning the vote of confidence, he said that electronic voting machines will be introduced so that nobody could raise fingers on the credibility of the elections and that the results are acceptable to all.

The prime minister said that it is also our effort that the Overseas Pakistanis also get their right to franchise.

Expressing apprehension over the malpractices in the recently held Senate elections, the prime minister asked the Election Commission of Pakistan (ECP) to get a briefing from the agencies as to how much money was used to purchase votes.

Imran Khan clarified that his concerns on the Senate Elections were not aimed at doing away with the independence of the ECP. 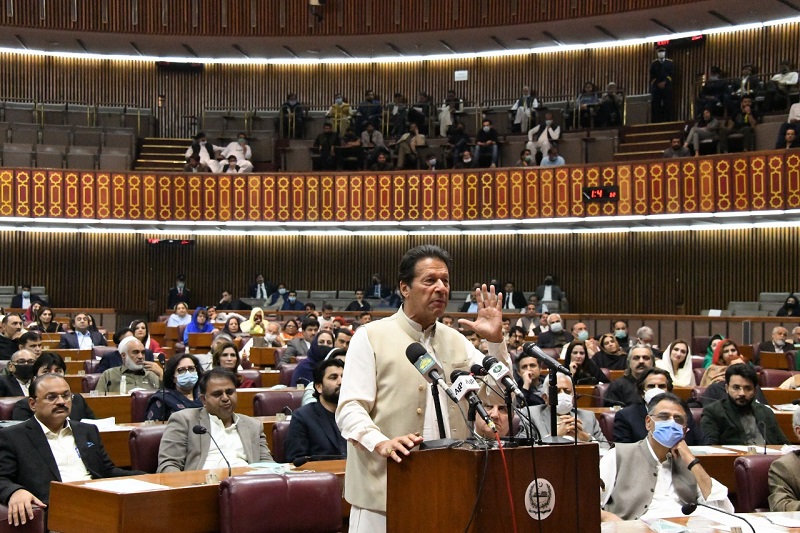 The prime minister once again categorically said that he will not give NRO to the corrupt elements even though the opposition continues its pressure tactics for the purpose. He highlighted the importance of building the nation on the principles of justice and rule of law on the pattern of the state of Madina.

Describing corruption as one of the biggest issues of the Country, the prime minister said that the entire society will have to fight against this menace to secure the future of coming generations. He underlined the need for improving the moral standards of the nation to check this nuisance.

Imran Khan vowed to continue his efforts in this direction and also assured his government’s every possible assistance to the judiciary and the National Accountably Bureau (NAB) for early conclusion of the corruption cases so that the corrupt elements are punished.

Imran Khan regretted that billions of rupees were plundered by the previous rulers. He said former President Pervez Musharraf committed a mistake by giving NRO to the leadership of Pakistan Muslim League-Nawaz (PML-N) and Pakistan People’s Party (PPP).

Referring to the performance of the government, the prime minister said that Pakistan has achieved economic stability and reached the stage to move forward. He said that the Current Account Deficit remained surplus for the five months for the first time in 17 years regardless of the breakout of COVID-19 which adversely impacted economies around the world.

The prime minister said that there has been a record increase in remittances. He said that our focus is now on bringing investment in the Country and bolster exports.

The prime minister said that the number of companies registered with the Securities Exchange Commission of Pakistan (SECP) indicates that people are ready to invest in the Country.

However, he pointed out that our biggest issue is the expansive power contracts signed in the past. He said that we are working to reduce the burden on the masses in this regard. He said the agreement signed with the IPPs will also help save money.

Imran Khan said that the government has launched mega projects such as Ravi City, Business Center Lahore, and Bundal Island for the wealth creation to retire the debt. He said that these projects will not only bring investments in the Country but also go a long way in protecting the environment and develop cities on modern lines.

Regarding inflation, the prime minister said that efforts are afoot to reduce the burden on the people. He said that the lower strata of society will be given subsidies in the days to come. Under the Ehsaas program, direct funds will be transferred to them.

The prime minister said that the government will soon launch a program to ensure that nobody sleeps hungry. He appreciated the Khyber Pakhtunkhwa government for extending health insurance to every household in the province. He said that the Punjab government also targets to reach every family by the end of this year.

The prime minister said that a mega program is also being introduced for the farmers to enhance the agri productivity. He said that cooperation in this regard has also been sought from China.

Imran Khan said that given the immense potential of Pakistan including its human resource dividend, nobody can stop the Country from moving forward. He said that the potential of the youth will be exploited including through their technical training.

Mati
Mati-Ullah is the Online Editor For DND. He is the real man to handle the team around the Country and get news from them and provide to you instantly.
Share
Facebook
Twitter
Pinterest
WhatsApp
Previous articleLesco Bill Online – Check and pay your electricity bills in 3 easy steps
Next articlePakistan Air Chief meets Sri Lankan Defence Secretary in Colombo