China desires to sort out issues with India through dialogue: Pakistan FM

Foreign OfficeChina desires to sort out issues with India through dialogue: Pakistan FM
FeaturedForeign Office
By Mati
May 27, 2020
Advertisement 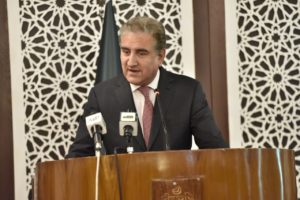 ISLAMABAD, Pakistan: Foreign Minister of Pakistan Shah Mahmood Qureshi has said that China and Nepal do not want confrontation with India and desire to sort out issues through dialogue; however they cannot remain oblivious to India’s illegal constructions, the Dispatch News Desk (DND) news agency reported.

In a statement on Wednesday on the regional situation as India has resorted to jeopardize peace by locking horns with its neighbours, the foreign minister warned India’s aggressive policy towards its neighbours is putting at stake the regional peace and security, and urged the world community to take notice of it.

The foreign minister expressed concerns over the construction of air strips and other infrastructure in the disputed territory of Ladakh.

Shah Mahmood Qureshi said that the Indian atrocities in Occupied Jammu and Kashmir are before everybody and it is bent upon changing the demographic composition of the territory.


Likewise, India has also turned its bilateral ties with Nepal sour and is also trying to sabotage the Afghan peace process and fuel unrest in Balochistan.

Now India’s illegal act of constructing a road and a bridge in Ladakh has put its tensions with China on the rise but yet it is ironically blaming Beijing for their skirmishes, Qureshi said.

The foreign minister said that India has buried the secularism, and inflaming the Hindutva ideology.

It may be mentioned that after eroding UN resolutions on Indian Occupied Kashmir and unilaterally changing the status of disputed Jammu and Kashmir Valley last August 5, India by using its “New Political Map” published in November 2019 has included Nepalese territory of Kalapani into the Indian State of Uttarakhand.

The moved has created an outcry in Kathmandu and Foreign Ministry of Nepal has called Indian action illegal and against the reality of the region.