In the meeting, the prime minister was briefed on the current regional and national security situation.

The meeting took place a day after the ruling Pakistan Tehreek-e-Insaf (PTI) suffered a humiliating defeat in the Senate Elections 2021 held at the Parliament House in Islamabad.

The PTI Candidate Dr. Abdul Hafeez Shaikh lost to the Opposition’s Joint Candidate Yousaf Raza Gillani in the Senate Elections on the general seat from Islamabad by a margin of 5 votes. 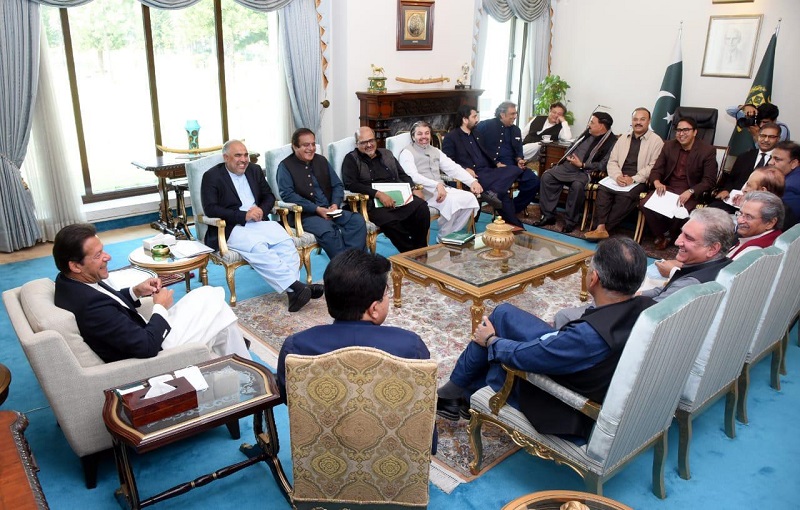 It’s worth mentioning that just a day before the Senate Elections, a series of startling videos surfaced in media in which Ali Haider Gillani, the son of Yousaf Raza Gillani, was seen telling a PTI MNA how to nullify the vote in favour of his father in the Senate Elections, and also offering him (and his aides from the ruling party) a huge amount of money as a bribe in reward.

Meanwhile, Prime Minister Imran Khan will seek a vote of confidence from the National Assembly on Saturday.

The prime minister has reportedly directed the lawmakers belonging to PTI and its allied parties not to leave the Federal Capital and ensure their presence in the Parliament on Saturday.

Prime Minister Imran Khan has also nominated Sadiq Sanjrani as the PTI’s Candidate for the slot of Chairman Senate, according to the Federal Minister for Information and Broadcasting Shibli Faraz.

In a bid to take the nation into confidence over the current political scenario, Prime Minister Imran Khan will also address the nation at 7:30 pm on Thursday (today).

Mati
Mati-Ullah is the Online Editor For DND. He is the real man to handle the team around the Country and get news from them and provide to you instantly.
Share
Facebook
Twitter
Pinterest
WhatsApp
Previous articleMG’s Car Delivery Schedule Falls Behind Due to Shipping Issues
Next articleToyota Revo Facelift 2021 Booking is Now Open for Dealerships!