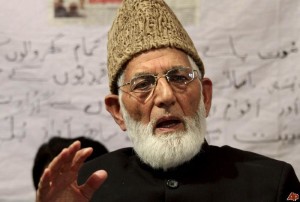 The All Parties Hurriyat Conference (APHC) has appealed to the people of Indian Illegally Occupied Jammu and Kashmir (IIOJK) to massively march towards Hyderpora in Srinagar on September 1 to pay tribute to the icon of Kashmir resistance movement Syed Ali Gilani on his first martyrdom anniversary.

Syed Ali Gilani embraced martyrdom during the Indian police custody on September 1, 2021 at his residence Hyderpora in Srinagar.

Gilani was kept under continued house arrest for over a decade. Indian forces’ personnel had forcibly taken away the dead body of Syed Ali Gilani for burial at Hyderpora graveyard under heavy military siege at night in violation of the last will of the veteran leader.

The Hurriyat leader spent many years in different Indian jails for opposing Indian rule in the occupied territory. He endured physical and mental torture during his imprisonment.

Syed Ali Gilani made a “significant contribution to the Kashmiris’ struggle for their right to self-determination and suffered lifelong persecution at the hands of India. He had foretold what future beholds for Kashmir in many of his revolutionary and visionary speeches. He had said when demography will be changed in favor of Hindus in Kashmir like in Jammu then India may concede to plebiscite in the territory. It is feared that Modi regime may accept the plebiscite once its settler plan is accomplished.

Like Quaid-e-Azam Muhammad Ali Jinnah, Quaid-e-Kashmir Syed Ali Gilani had also drawn the conclusion from the past events that Hindus would never accept Muslims as an entity in India and a majority population in IIOJK.

Pakistan conferred Nishan-i-Pakistan on Syed Ali Gilani in recognition of his decades-old struggle for Kashmiris’ right to self-determination.

It is the time that the Indian government should “release all those detained on political or humanitarian grounds” to create a conducive environment for peace to prevail in the region.

Meanwhile, Mushaal Hussein Mullick, the Chairperson Peace and Culture Organisation and the wife of detained Kashmir leader Yasmin Malik, in a Twitter statement on Saturday paid glowing tribute to the late APHC leader, and announced to observe September 1 as ‘Baba-e-Huriyat’ Day.”

Gilani sahab is the loss that we will never ever forgive in our lives. The impact and efforts that he made through out his life is remarkable, In order to keep his memory alive we will observe Septemeber 1st as ‘Baba-e-Huriyat’ Day. pic.twitter.com/4QV5zAQhUd

Mati
Mati-Ullah is the Online Editor For DND. He is the real man to handle the team around the Country and get news from them and provide to you instantly.
Share
Facebook
Twitter
Pinterest
WhatsApp
Previous articleAsia Cup 2022 PTV Sports Live: Sri Lanka vs Afghanistan T20
Next article‘Safety and well-being of our Countrymen comes first’, says COAS during visit to flood-hit Balochistan