ISLAMABAD, Pakistan: The National Institute of Health (NIH) in collaboration with Fleming Fund Country Grant to Pakistan conducted a two-day semi-virtual National Symposium on Antimicrobial Resistance (AMR) to provide a platform to understand the challenges, impact, and progress of AMR in human, animal and environmental health sectors across Pakistan.

AMR is one of the biggest public health threats in the world today. It represents the capability of microorganisms to evolve in such a manner as to render the antimicrobials we have long used against them as ineffective.

While chairing the National Virtual Symposium, Executive Director NIH Maj General Professor Aamer Ikram said, “It is a fact, not everyone is aware that antibiotics need to be used in an appropriate manner to prevent the emergence of the resistant superbugs. This kind of a symposium has provided a much-needed platform for the key stakeholders to sit together and introduce massive changes to the present practices of the use of antimicrobial agents in human, animal and environmental health sectors under a collective One Health approach.”

As a commitment to the World Health Assembly Resolution 2015 (WHA68.7), Pakistan had developed its National AMR Framework, National Action Plan (NAP) and a multisectoral National AMR Steering Control Committee in 2017. 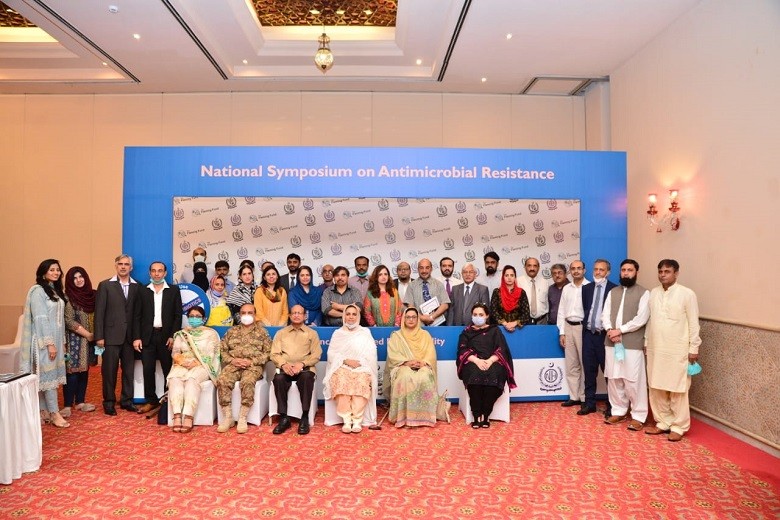 Keeping in view the importance of the issue, the Government of Pakistan has approved funding to launch the National Program on AMR and IPC based at NIH.

The National Virtual Symposium on AMR provided all the key stakeholders an opportunity for further proceeding.

“The Government of Pakistan is committed to play its part in the global disease control programs more effectively and stand alongside the global community in their effort to reduce the burden of AMR,” Dr. Nausheen Hamid, Parliamentary Secretary for Health, added.

“We are grateful to the international community as well as for our technical partners.”

The UK established Fleming Fund supports the Government of Pakistan to implement the AMR strategy within the country. This grant for AMR is intended to develop and implement a thorough plan on AMR surveillance capacity building involving the human and animal health sectors and other related stakeholders.

The National Action Plan lists AMR surveillance as one of seven priority areas. It includes up-gradation of the public and animal health laboratories, capacity building of the laboratory staff working on AMR, development and implementation of AMR surveillance plans in both human and animal health sectors, and survey collection for the development of AMC and AMU data baseline.

Mati
Mati-Ullah is the Online Editor For DND. He is the real man to handle the team around the Country and get news from them and provide to you instantly.
Share
Facebook
Twitter
Pinterest
WhatsApp
Previous articleYumna Zaidi – Age, Education, Career, Family & Much More!
Next articleDr Hafeez Shaikh meets new World Bank Country Director for Pakistan