Kashmir2 million Hindus to be settled in Indian Occupied Kashmir: Sardar Masood...
Kashmir
By Mati
May 19, 2020

ISLAMABAD, Pakistan: The President of Azad Jammu and Kashmir Sardar Masood Khan has said that around two million Hindus will be settling in Indian Occupied Jammu & Kashmir (IOJ&K) in the first wave under the new law introduced by India, enabling the non-natives to reside in the valley.

In his remarks at a Webinar organized by the Center for Global & Strategic Studies (CGSS) on Tuesday on the topic, “Latest Situation in Kashmir Vis-À-Vis Indian Policies” on Tuesday, Sardar Masood Khan said that the Indian law gives non-Kashmiri residents permission and further facilitates the non-natives in acquiring permanent residence in IOJ&K.

In this way, Kashmir will be turned into a Hindu state and Muslim majority will be reduced, he added.

“Kashmir is under a triple lockdown,” he remarked.

May 19; Muzaffarabad: Addressing a webinar on “Latest Situation in Kashmir vis-a-vis Indian Politics” hosted by Centre for Global and Strategic Studies (CGSS). pic.twitter.com/RDgVie4OvQ

Sardar Masood Khan said that the 5th August act is a siege and its purpose is to kill people. He said that India has violated the ceasefire at the Line of Control (LoC) a number of times while targeting the civilians which has caused damage to the infrastructure also.

The Azad Jammu and Kashmir president further said that crimes that are being committed there can be listed as crimes against humanity, genocide war crimes and ethnic cleansing. So the International Community of the multilateral institutions are directly relevant here. Therefore, we must engage them because this lack of engagement is making India prevalent.

The Webinar was organized to examine the prevailing situation in the Indian Occupied Jammu & Kashmir (IOJ&K) while analyzing the Indian strategies and what can be the possible policy options for Pakistan. 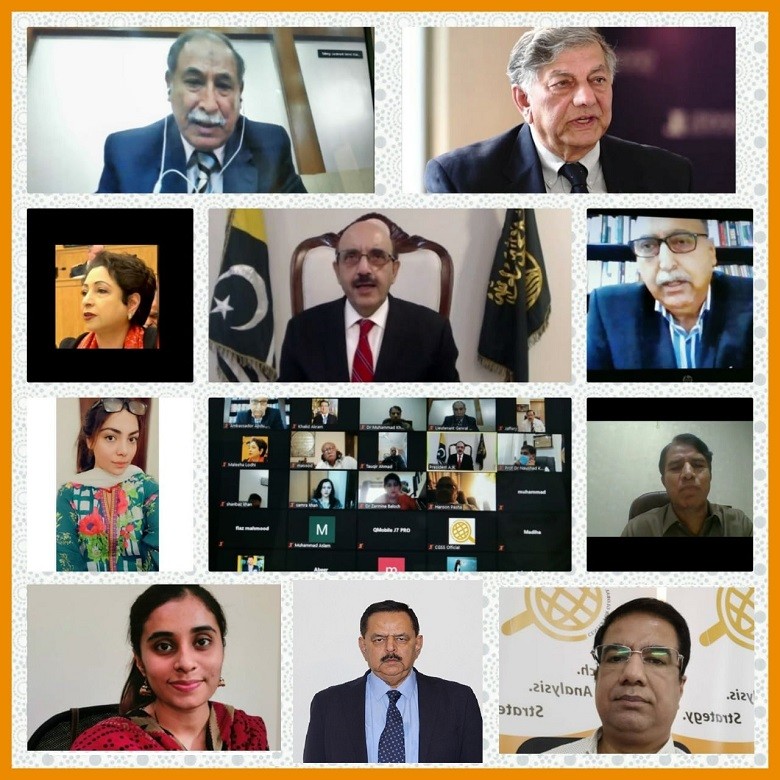 While speaking in the Webinar, the former Governor of Punjab Lieutenant General (retd) Khalid Maqbool shared valuable insight regarding the latest situation on the LoC and possibility of a military conflict.

Lieutenant General (retd) Khalid Maqbool stated that the grand strategy of India is to destabilize Azad Kashmir and Gilgit-Baltistan.

The former Punjab governor said that we can expect increased activities on the Line of Control through ceasefire violations in which our civilian population would be primarily targeted.

However, the Pakistan Army has been able to counter these violations very effectively. War cannot be ignored and Pakistan is prepared for it if the freedom movement on both sides eventually activates the borders.

The former Pakistan Representative to UN Dr. Maleeha Lodhi stated that the pandemic has given an opportunity to the Indian government to further intensify the repression and take even more draconian steps at a time when the world is preoccupied by fighting COVID-19.

Dr. Maleeha Lodh said that at this time, countries and human rights organizations are distracted and media attention is fixed particularly on the health crisis. She said that facing a health emergency with hands tied and lips sealed each one of us can now directly feel some of the pain of lockdown as we ourselves have been practicing some degree of social isolation.

Dr. Maleeha Lodhi said that the International Community has a responsibility to address this dire situation but Pakistan holds the major responsibility. The Kashmiri’s look to us and we cannot let them down. Our policy has to be consistent and need consistency in our diplomatic circle. Kashmir today lives in a state of multiple deprivations since the last many years that has taken away their fundamental liberties and prevented them from exercising their right to self-determination.

It was a pleasure to participate in this webinar today on the situation in occupied Jammu and Kashmir with so many distinguished panelists pic.twitter.com/wF7ETohzst

The former Ambassador of Pakistan to India Ambassador Riaz Khokhar stated that Kashmiri’s must be saluted, they have made enormous sacrifices. He said that Narendra Modi is committed to a policy on which they may not have a national consensus but this incremental genocide policy is being supported by the majority. This policy has been adopted to change the demographic character of Kashmir.

Ambassador Riaz Khokhar said that there is a long history of multilateral diplomacy where the Western countries could have played a decisive role. No Indian leader has been sincere about finding a solution for Kashmir. We must take the International Community into confidence and turn it into a diplomatic force.

The former High Commissioner of Pakistan to India Ambassador Abdul Basit stated that Hindutva is nothing new. We need to pursue a consistent policy on Kashmir as it has cost us and the Kashmiri’s to a large extent. Kashmiri’s are determined and have never given up and will continue to do so.

Ambassador Abdul Basit said that Pakistan requires coherent efforts and come up with a consolidated Kashmir policy. In this pandemic, India is taking advantage by pursuing illegal policies aimed at targeting the right of self-determination of Kashmiri’s. The point is how Pakistan should be countering these Indian policies and need clarity in this regard.

The Professor at the Department of Politics and IR in International Islamic University Dr. Muhammad Khan stated that Pakistan has been frequently warning International Community about India’s False Flag Operations in Jammu and Kashmir. In 21st century, India conducted small and large scale false flag operations against Pakistan.

Dr. Muhammad Khan said that the broader objective of India with regard to these false flag operations was to malign the image of Pakistan both regionally and globally there is a specific objective pertaining to each false flag operation but different depending upon the situation in the design of this the broad objective.

The Webinar was attended by approximately 52 participants and was moderated by the Executive Director CGSS Lieutenant Colonel (retd) Khalid Taimur Akram.