ISLAMABAD, Pakistan: A total of 170 Candidates filed their nomination papers with the Election Commission of Pakistan (ECP) to contest the upcoming Senate Elections 2021.

The aspiring Candidates include 21 from Punjab, 39 from Sindh, 51 from Khyber Pakhtunkhwa, 41 from Balochistan, and 10 from the Federal Capital.

Meanwhile, the EPC on Wednesday started the process of scrutiny of nomination papers filed for the Senate Elections.

The process of scrutiny of nomination papers will continue till February 18 (tomorrow).

The Candidates can file appeals against acceptance or rejection of nomination papers on February 19 and 20 whereas these appeals will be disposed of by the tribunal on February 22 and 23.

The polling on the 48 Seats of the Senate will be held on March 3 at the Parliament House in Islamabad and the four Provincial Assemblies. 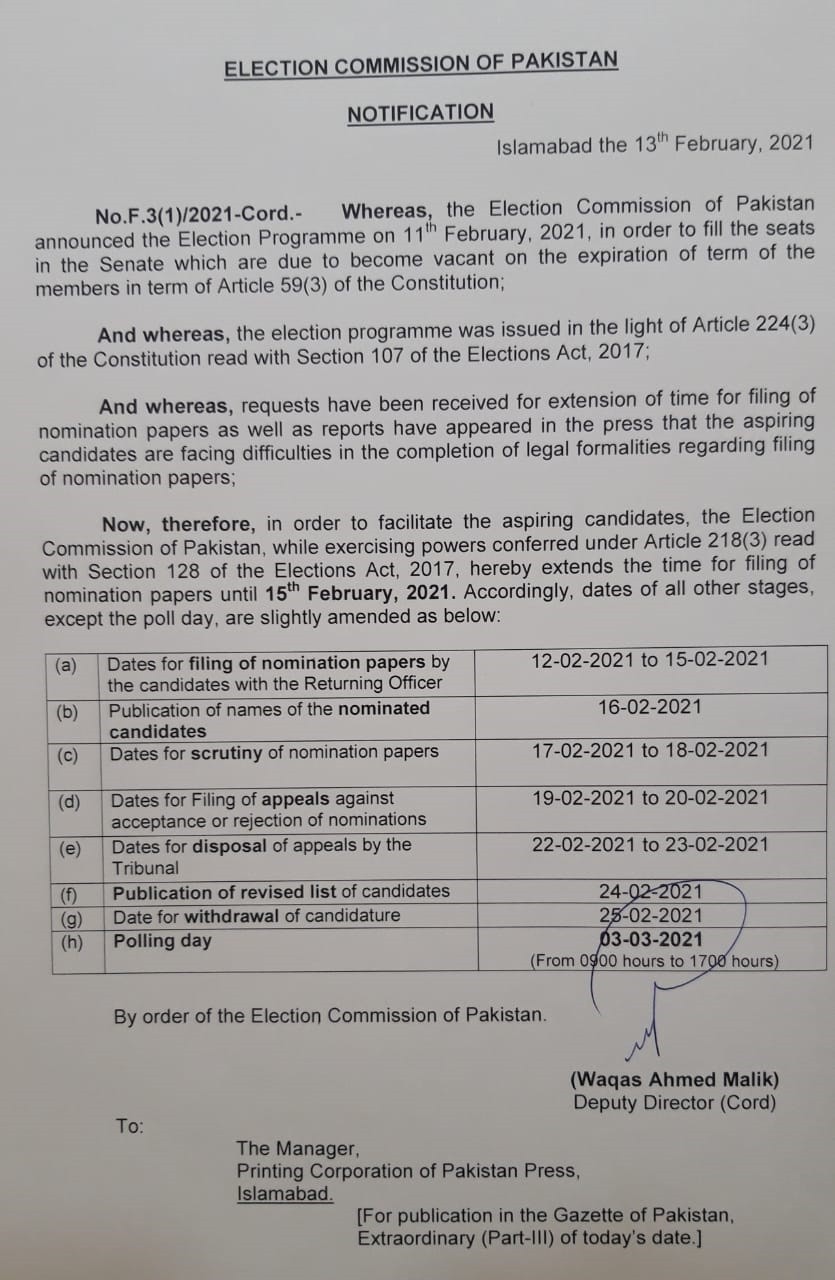 Out of a total of 104 Senators in the Upper House of the Parliament, 52 Senators are set to retire on March 11 on completion of their six-year term.

However, the polling on March 3 will be held to elect 48 Senators — 12 each from Khyber Pakhtunkhwa and Balochistan, 11 each from Punjab and Sindh, and 2 from Islamabad — as 4 to be retired Senators are from the erstwhile Federally Adminis­tered Tribal Areas (FATA) which has now merged into the Khyber Pakhtunkhwa province.

Mati
Mati-Ullah is the Online Editor For DND. He is the real man to handle the team around the Country and get news from them and provide to you instantly.
Share
Facebook
Twitter
Pinterest
WhatsApp
Previous articlePM Imran Khan inaugurates Spring Tree Plantation Campaign 2021 in Islamabad
Next articleAyeza Khan Shares Romantic Photoshoot To Celebrate Danish’s Birthday!