The Cabinet Division has issued a notification in this regard which states “In terms of rule 4(6) of the Rules of Business. 1973 read with serial number IA of Schedule-VA of the said Rules, the Prime Minister has been pleased to appoint, with effect from 14th September, 2018, Sayed Zulfiqar Abbas Bukhari as Special Assistant to the Prime Minister on Overseas Pakistanis & Human Resource Development, with the status of Minister of State.” 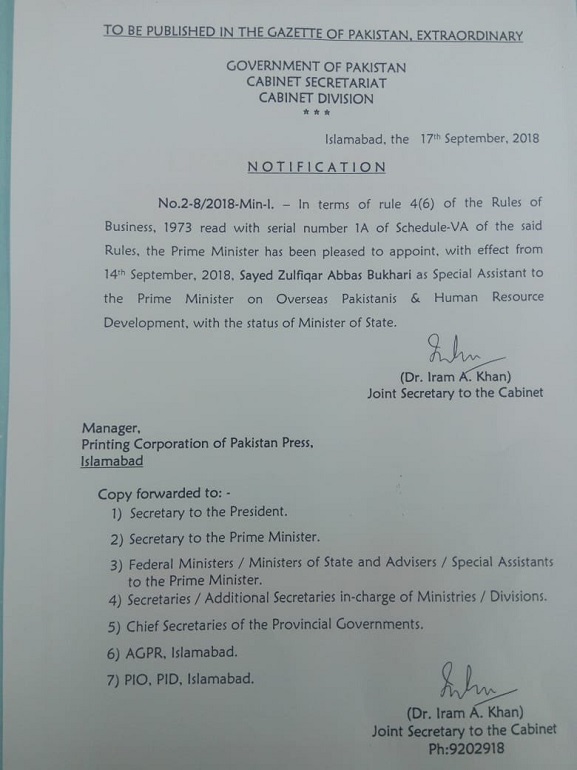 With the induction of Zulfi Bukhari in the Federal Cabinet, the total number of the Cabinet members has reached 32.

Besides Zulfi Bukhari, Mirza Shahzad Akbar, Iftikhar Durrani and Naeem ul Haq have also been included in the Federal Cabinet as the prime minister’s special assistants.

Mati
Mati-Ullah is the Online Editor For DND. He is the real man to handle the team around the Country and get news from them and provide to you instantly.
Share
Facebook
Twitter
Pinterest
WhatsApp
Previous articleAsad Umar presents Supplementary Finance Bill in NA; announces Sehat Insaf Cards and pension increase
Next articlePTV Sports India vs Hong Kong Live Cricket Streaming Asia Cup 2018