The donation was presented at an event held on October 20, 2022 to support flood-affected victims during this time of crisis, to demonstrate the network’s excellence during testing times, and to honor the resilient bond between Pakistan and China. 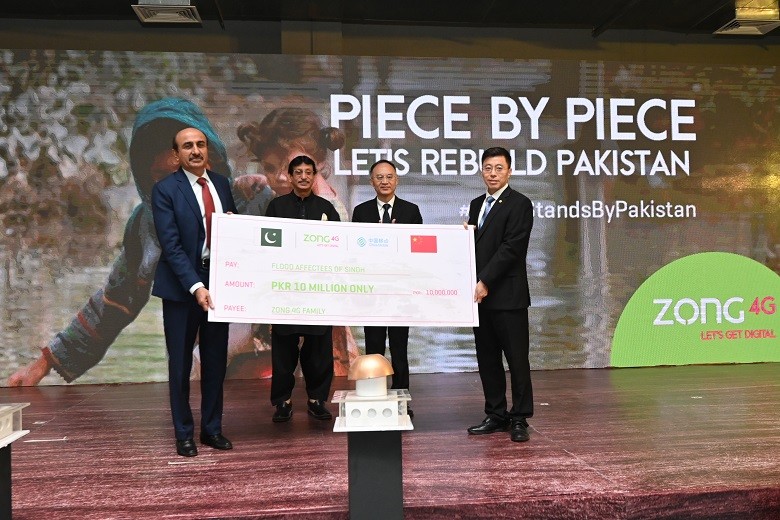 Pakistan has been devastated by one of the worst humanitarian disasters in recent history. This has resulted in unprecedented national damage. As one of the Country’s largest telecommunications networks, Zong believes it is its responsibility to assist Pakistan in regaining its footing.

The employees of the company stepped up and donated their one-day salary. While Zong 4G donated Rs 1.5 for every rupee contributed by the employees.

To accomplish this, Zong has collectively donated 10 million rupees to the Sindh government, which will be used to rehabilitate the province’s flood victims. This cheque was presented Mr. Muhammad Ismail Rahoo, Provincial Minister of Environment, Climate Chang, Coastal Development, Universities and Board Departments, who thanked Zong and its employees on behalf of the people of Sindh for this generous contribution

Chairman and CEO of Zong 4G, the Minister of Information Technology and Telecommunication, and the Chinese Ambassador all addressed the participants. In addition to the cheque presentation, Zong highlighted its sustainability efforts and shared the following year’s technical plan, which highlighted the company’s ongoing best efforts in ensuring best services for its customers.

Commenting on Zong’s support for flood-affected victims, Zong 4G Chairman and CEO Mr. Wang Hua said, “ZONG has always been at the forefront of helping our fellow Pakistanis in their time of need. I am proud of all of our employees who have stepped forward in these difficult times to support our communities and extend all help possible.”

“Zong has once again come through for their country in a time of crisis. The amount that has been raised for the victims of the floods in Sindh is commendable,” said Mr. Muhammad Ismail Rahoo, Provincial Minister of Environment, Climate Change, Coastal Development , Universities and Board Departments “It will be beneficial to a large number of people.”

Zong also elaborated on its committed towards re-building Pakistan at the occasion.

As part of its social contract, the telecommunications leader will carry out flood relief efforts in three phases.

Phase 1: Robust Connectivity – Zong’s technical teams are working around the clock to ensure robust connectivity in all flood-affected areas.

Phase 2: Delivering Necessities for Survival – Zong is collaborating closely with NGOs and the Government to ensure that flood affectees have access to food, medicine, and shelter.

Phase 3: Rehabilitation and Re-building the country – In the long term, Zong will take a variety of initiatives to aid the reconstruction of the country’s digital and communications infrastructure.

Along with the company’s senior management, several dignitaries were also in attendance at the event, including the Minister of Information Technology and Telecommunication, Provincial Minister of Environment, Climate Change, Coastal Development, Universities and Board Departments, Representatives from Pakistan Telecommunication Authority, and the Chinese Ambassador.