ISLAMABAD, Pakistan: The Federal Minister for Narcotics Control Brigadier (retd) Ijaz Ahmad Shah has emphasized on the need to target the drug dealers and providers.

“Zero tolerance policy to be adopted against these culprits,” Ijaz Shah said on Thursday during his visit to the Anti-Narcotics Force (ANF) Headquarters in Rawalpindi after assuming the portfolio of the Federal Minister for Narcotics Control.

Upon his arrival, he was welcomed by the Director-General ANF Major General Muhammad Arif Malik and Senior Staff Officers of ANF.

It is pertinent to mention that the Federal Minister for Narcotics Control Brigadier (retd) Ijaz Ahmed Shah has already served in ANF as the Force Commander ANF Punjab from November 1996 to December 1998 and due to his meritorious Services for ANF, he was awarded Sitara-i-Basalat. 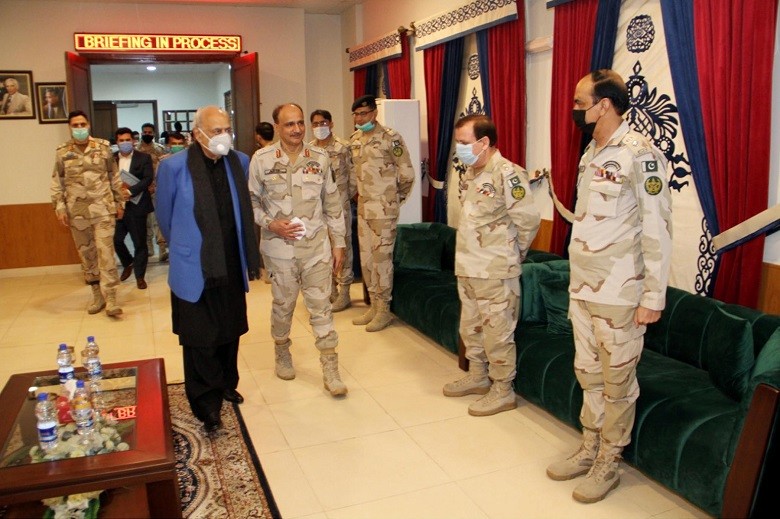 During the briefing, the director-general ANF highlighted that ANF is also undertaking a drug demand reduction campaign through public awareness drives and community participation activities throughout Pakistan apart from running rehabilitation centers providing free of cost treatment to drug addicts.

The minister was also informed about the organizational requirements of ANF with respect to the enhancement of manpower, development of infrastructure, overcoming legal issues, and establishment of new drug treatment centers in the Country.

The federal minister was of the view that the youth is the primary victim of this menace and immediate steps need to be taken in order to protect their future.

Ijaz Shah instructed ANF officers to come up with a comprehensive plan for awareness program to be conducted in educational institutes.

Brigadier (retd) Ijaz Ahmed Shah emphasized on the fact that case studies and drug abuse effects should be discussed in detail to sensitize them about the aftermath of indulging in drug addiction.

The minister appreciated ANF’s achievements and its role in combating the trafficking of illicit drugs at the national, regional, and global levels.

The federal minister assured his complete support to ANF for addressing the inadequacies of the force to tackle the menace more vigorously.

Ijaz Shah concluded the meeting with a hope that the given instructions will be executed on an immediate basis across the Country.

Mati
Mati-Ullah is the Online Editor For DND. He is the real man to handle the team around the Country and get news from them and provide to you instantly.
Share
Facebook
Twitter
Pinterest
WhatsApp
Previous articleIT Ministry and UNDP to jointly work on digitalization
Next articleClosing Plenary of Pak-UK Education Gateway Virtual Conference held