ISLAMABAD, Pakistan: The US Special Representative for Afghanistan Reconciliation Zalmay Khalilzad has lauded the timely action taken by the law enforcement agencies (LEAs) to foil the terrorist at Pakistan Stock Exchange (PSX) in Karachi on June 29.

In a meeting with the Foreign Minister Shah Mahmood Qureshi at the Ministry of Foreign Affairs in Islamabad on Wednesday, Zalmay Khalilzad expressed grief over the terrorist attack at PSX, and appreciated the exemplary courage and bravery of the LEAs personnel.

During the meeting, the two dignitaries exchanged views on the Afghan peace process and the overall regional situation. 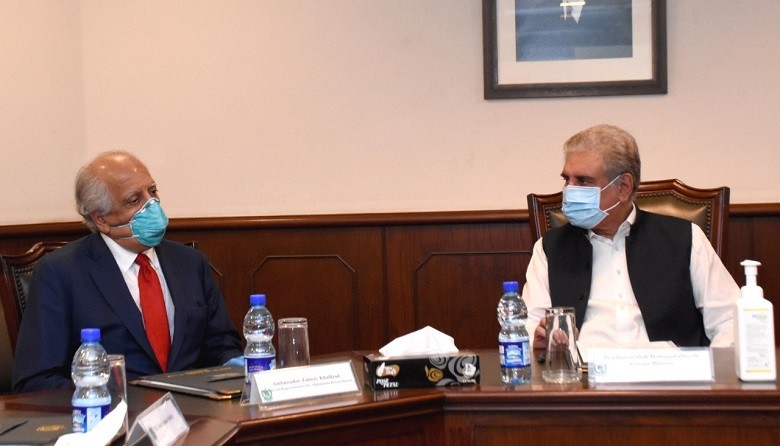 In his remarks at the meeting, the Foreign Minister Shah Mahmood Qureshi said that the progress made so far in the Afghan peace process is very encouraging.

Shah Mahmood Qureshi welcomed the announcement of the parties demonstrating their readiness for the inter-Afghan talks and announcing their respective negotiating teams.

Qureshi said that the inter-Afghan talks will pave the way for the lasting and durable peace in the war-torn Country.

The foreign minister said that the Afghan peace process has entered a critical phase, and at this juncture, we must be wary of elements who seek to sabotage peace efforts in Afghanistan.

The minister said that Pakistan has been hosting the Afghan refugees for the last 40 years. He said that the International Community must step in to ensure the dignified repatriation of Afghan refugees.

In addition, he said that Pakistan stands ready to work with regional and international partners for a lasting and peaceful political solution to the Afghan issue.

The foreign minister said that fulfilling its shared responsibility, Pakistan will continue to play its conciliatory role for peace in Afghanistan with sincerity. He said that peace and stability in Afghanistan is inevitable for development and progress of the region.

The Foreign Secretary Sohail Mahmood and Pakistan’s Special Representatives for Afghanistan Affairs Mohammad Sadiq were also present in the meeting.