There are two statements available in social media showing details of alleged bank accounts of Imran Ali. However, credibility of bank details could not be verified unless the Supreme Court of Pakistan shares details to media.

The Supreme Court of Pakistan has directed detail report from Joint Investigation Team (JIT) about the alleged bank accounts of killer Imran Ali.

Statements indicate that Imran Ali allegedely runs several bank accounts from different cities of Pakistan including capital city of Islamabad. Anchorperson further claimed that Imran Ali had over 40 bank accounts having billions of rupees in his local and foreign accounts and he is member of an international child pornographic racket.

CM Punjab Shehbaz Sharif had directed to include State Bank officials in Joint Investigation Team (JIT) to probe allegations leveled by anchorperson Dr Shahid Masood. Anchorperson claimed that two important personalities including one Federal minister are behind this racket of child pornography.

It may be recalled that another racket of child pornography was unearth in Kasur who abused with 210 children and made their videos and sold outside country but no person was tried in this case.

Meanwhile, in its report submitted to the JIT, the State Bank of Pakistan said that it found no such bank accounts by accused Imran Ali. 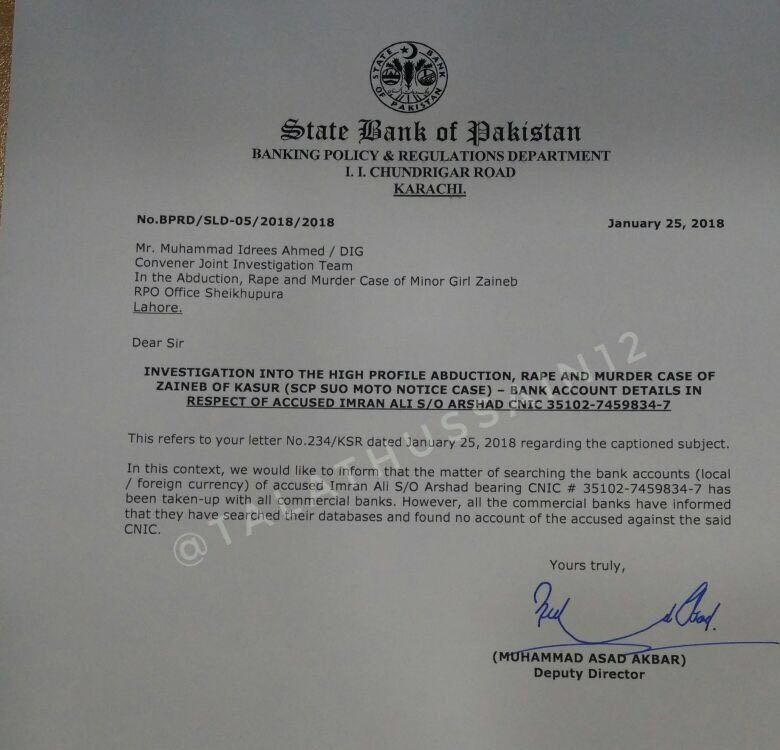 Separately while addressing a Press Conference in Lahore on Friday, the Spokesman of Punjab government Malik Muhammad Ahmad Khan said that the bank accounts that were alleged to belong to the accused, Imran Ali in Zainab rape and murder case do not exist.

Malik Ahmad Khan said that despite written notice, Dr. Shahid Masood did not appear before the JIT formed by Punjab government to share the proof of information he claimed.

The Spokesman termed it as a deliberate attempt to change the direction of the investigation of Zainab case.