Youth holds protest outside restaurants against use of unsustainable packaging practices

ISLAMABAD, Pakistan: Youth Climate Activists from different schools of Islamabad held a protest in front of popular restaurants to demand a ban on the use of plastic, styrofoam and paper as this causes massive environmental degradation.

They called on these restaurants to instead focus on reusable packaging and to put their thoughts and efforts also into how to make an eco-friendly business.

Youth Climate Activists is a group of more than 40 activists from all over Pakistan. Their work revolves largely around the climate crisis.

The activists handed out their list of demands to the restaurants as well, asking them to stop the usage of plastic straws, bags, utensils, and disposable packaging such as styrofoam. 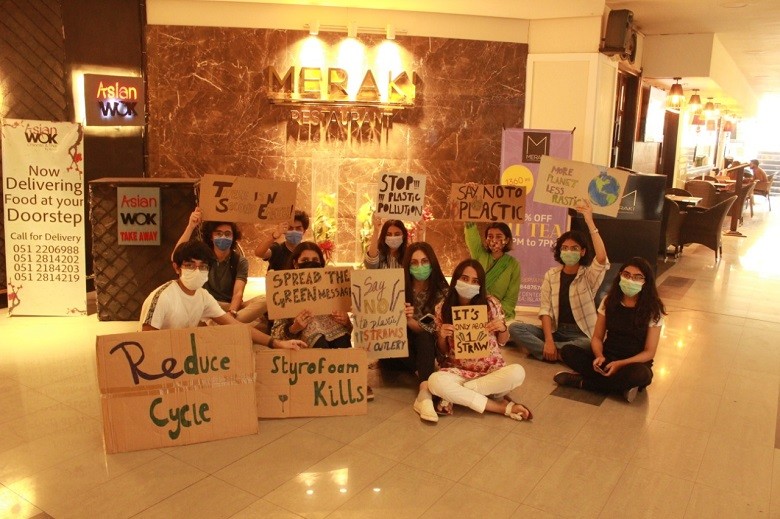 Hania Imran, the Organiser of the protest said, “We have no time. There are only seven years left before the climate crisis becomes irreversible, and then we can’t do anything. We have to act now for our Earth and our future.”

Hamza Aamir, a protester, spoke on the occasion, “A slow response to the climate crisis is as good as no response at all. Plastics used in these restaurants are not a necessity but rather a mark of complacency. Sustainable alternates need to be adopted right now.”

Khadija Haider, a member of the group said, “We are sitting here for the sake of our Earth. We wish to minimize the use of plastic and practice sustainable methods instead.  We demand such a change from our restaurants.”

Rida Piracha, a protester, said, “Restaurants contribute to the growing climate crisis and its time we held them responsible and give them an eye-opener on the effect they have on the environment. Make them realize that the simple steps taken by them today can make a big difference tomorrow.”

The protesters held placards highlighting the damage plastic and styrofoam causes, and why they required urgent action from both businesses, big corporations and the government.

Mati
Mati-Ullah is the Online Editor For DND. He is the real man to handle the team around the Country and get news from them and provide to you instantly.
Share
Facebook
Twitter
Pinterest
WhatsApp
Previous articleCivil Riots: Kyrgyzstan imposes the State of Emergency in Capital Bishkek
Next articlePakistani Ambassador Syed Ali Asad Gillani presented copy of credentials to Uzbek FM Abdulaziz Kamilov