Youm-e-Istehsaal Observed at Embassy of Pakistan in Kyiv

The day was observed to highlight the atrocities being committed by the Indian Occupation Forces in the last more than seven decades, especially since the revocation of Article 370 by the Indian government, and reiterate the unwavering support of the people and government of Pakistan with our Kashmiri brethren.

The event started with the recitation of the Holy Quran.

Afterwards, the messages of the President Dr. Arif Alvi, Prime Minister Imran Khan, and Foreign Minister Shah Mahmood Qureshi were read out on this occasion. 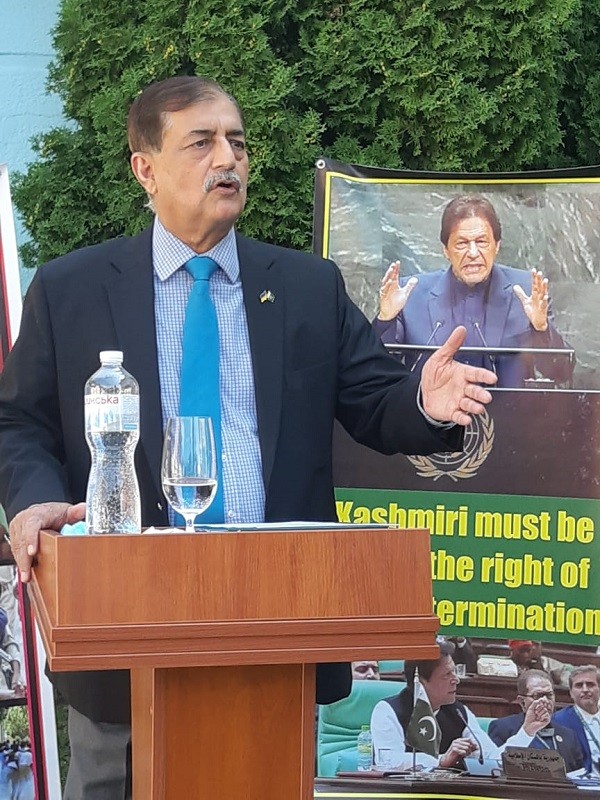 While addressing the audience, Ambassador of Pakistan to Ukraine H.E. Zahid Mubashir Sheikh, highlighted the grave human rights violations and the reign of tyranny since 1948, and especially in the aftermath of revoking of article 370 and 35A, being imposed on the innocent Kashmiris by the Indian Occupation Forces.

The ambassador added that one year ago on this day, Modi’s fascist regime illegally and against all international laws and relevant UNSC resolutions revoked article 370 and 35A.

Anticipating severe protests and response from Kashmiri people, the Indian government deployed more troops taking the number of total Indian forces in the IOJK to around one million. The whole valley was put in a complete state of lockdown; all kinds of communications were blocked whereas Kashmiri leadership and youth were put in prison.

H.E. Zahid Mubashir Sheikh expressed that due to Pakistan’s active diplomacy and support of the international community, the issue of IIOJK has been raised twice, on August 16, 2019 and January 15, 2020, in the UN Security Council which has once again supported Pakistan’s claim that IOJK is an internationally recognized disputed territory, on the agenda of the UN, to be resolved as per the wishes of Kashmiris and UNSC resolutions.

The world has taken notice of the Indian atrocities and human rights violations in the IOJK.

The UN Secretary-General, UN High Commissioner for Human Rights, the United Nation’s Rights Experts, Human Rights Watch, Amnesty International, the Parliament of European Union and OIC have expressed deep concern over the human rights violations in Kashmir and have called on India to lift the curfew, remove communication blackout, respect and protect human rights of the Kashmiri people.

The ambassador further said that the Indian brutality has not stopped and the siege of Kashmir continues till today. The whole valley has been turned into the largest prison on earth and in spite of condemnation and appeals by the international community to lift the restrictions, the Indian government did not budge.

The restrictions imposed by the Indian government in the IOJK are causing immense suffering to the Kashmiri people especially women, children, the elderly, and sick.

The Indian government’s actions have resulted in the shortage of food and medicine in the IOJK.

The people are unable to go to work or mosques; children are unable to attend their school and as a whole Kashmiris are barred from celebrating their holy festivals.

Thousands of Kashmiris have been detained. People’s rights to peaceful assembly, free movement, and observance of religious obligations are being trampled upon.

The Indian rule of tyranny is unfolding an unimaginable level of human catastrophe in the IOJK.

It was further added the government of Pakistan condemns the illegal, unilateral, reckless, and coercive attempt by India to alter the disputed status of IIOJK as enshrined in the UNSC Resolutions.

Pakistan will continue to provide moral, diplomatic and political support to the Kashmiri people till the fate of IOJK is decided according to the UNSC resolutions and wishes of its people. A special documentary on Kashmir, highlighting the serious human rights violations in the IIOJK, was also screened.

Mati
Mati-Ullah is the Online Editor For DND. He is the real man to handle the team around the Country and get news from them and provide to you instantly.
Share
Facebook
Twitter
Pinterest
WhatsApp
Previous articleMishal Malik seeks UNSC Resolution against India for altering demography of Kashmir
Next articlePakistan Embassy in Kathmandu Organizes Talk Programme on ‘Jammu and Kashmir Dispute’