ISLAMABAD, Pakistan: The United Global Organization of Development (UGOOD) in collaboration with the Nation Child Protection Center (NCPC) and the Ministry of Human Rights organized an “Awareness Raising Session on COVID-19 and Distributed Safety Kits” at the NCPC Head Office in Islamabad on Friday.

The event was organized in connection with the “World Day against Child Labour 2020” observed today with a focus on the Impact of Crisis on Child Labour.

The COVID-19 health pandemic and the resulting economic and labor market shock are having a huge impact on people’s lives and livelihoods. Unfortunately, children are often the first to suffer.

The crisis can push millions of vulnerable children into child labour. Already, there are an estimated 152 million children in child labour, 72 million of which are in Hazardous work.

These children are now at even greater risk of facing circumstances that are even more difficult and working longer hours. 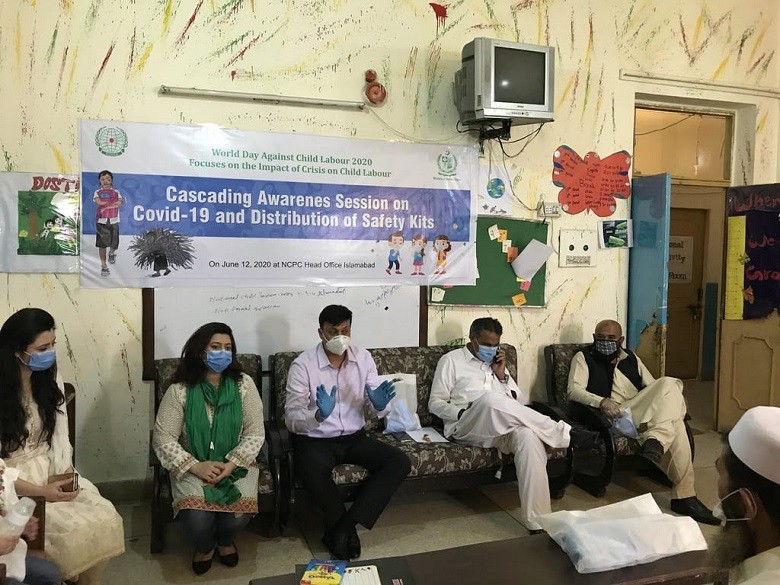 Millions of them are abused and tortured every day, deprived of their right to live with their parents, to go to a school, to play with their friends, and to experience a childhood.

The dysfunctional child protection departments and the disinterested police only add fuel to the fire.

Pakistan suffers from excessive, contradictory and convoluted legislation. Of the 35 national and provincial child protection acts, there are no two acts which agree on if and when a child can or cannot be a domestic worker.

The Manager Program-UGOOD Mehwish Kayani emphasized on the existence of Child Domestic Labor in Pakistan and the involvement of girls in domestic servitude. She said after ratifying the Convention on the Rights of Child in 1990, it took 27 years for Pakistan to enact the National Commission on the Child Rights Act and another three years to establish the commission.

The Sindh Child Protection Authority Act was enacted in 2011 but the authority not established till 2016.

The Punjab Domestic Workers Act enacted in 2019 is still awaiting notification of dispute resolution committees. Sindh, Khyber Pakhtunkhwa, and Balochistan have not even bothered to enact laws for domestic workers.

Pakistan has failed to establish a single national helpline and a single child abuse database. There are over two dozen semi-functional helplines that provide little or no help.

The state is dragging its feet on notifying ZAARA, an agency required to be formed under the Zainab Alert Act 2020.

There ought to be a single nationwide child protection helpline and citizens encouraged and incentivized to report cases of child domestic workers below the age of 16.

The representatives also pointed out that poor implementation of the laws enacted to ensure Free and Compulsory education is the reason for the involvement of children in widespread domestic servitude.

The UGOOD’s Team distributed Safety kits among National Child Protection Centre (NCPC) Staff and Children. They also told them to avoid touching the mouth, eyes, and nose. Instead, follow;

Mati
Mati-Ullah is the Online Editor For DND. He is the real man to handle the team around the Country and get news from them and provide to you instantly.
Share
Facebook
Twitter
Pinterest
WhatsApp
Previous article
Interview with Turkish Songwriter Turgay Evren: Song Kashmir is My Name represents Pains of People under Occupations
Next article
TCL collaborates with Daraz Mobile Week 2020
Share
Facebook
Twitter
Pinterest
WhatsApp