The 5th Edition of World Cup Cricket of the Blind (ODI format) was played in Pakistan and UAE in January 2018. The final was played at Sharjah Cricket Stadium on January 20 between Pakistan and the Defending Champions India but unfortunately the former lost to their arch rivals by two wickets.

The Pakistan Blind Cricket Council (PBCC) — the host of the event — announced 22-member Squad for the World Cup. The questions arise that who are these players? Where they come from? And what they do?

Only about half of Pakistan’s 22-member Squad have some sort of regular jobs while nine of them are unemployed, and two work on contract or on daily wages.

The PBCC awards contract to 17 players in three categories: of which, the highest A category players are given Rs 12,000; while the B and C are given Rs. 10,000 and 9000 respectively. Not only that, All PBCC Directors, Chairman and other Clubs Executives do the volunteer work for the promotion of cricket and to serve their motherland. This small piece is a shot in the flood of information to briefly introduce our national heroes. 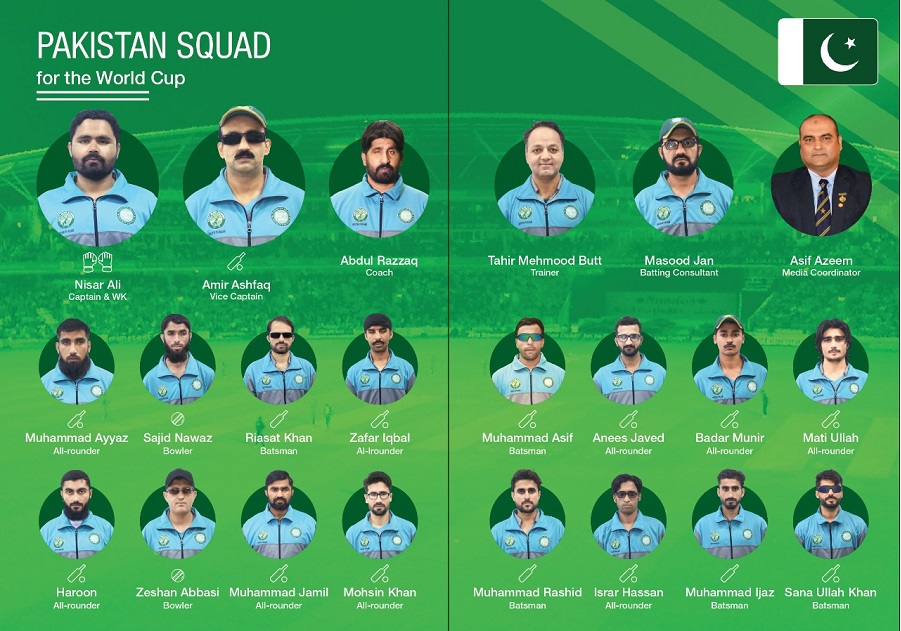 It merits mentioning here that Pakistan Blind Cricket Team holds a total of 19 world records in International Cricket which include Highest T20 and ODI total scores against West Indies 373 and against South Africa 517 respectively; 264 runs in a single T20 innings by Muhammad Akram; fastest 50 by Aamir Ishfaq on 13 balls; and winning an ODI by largest margin of 399 runs.

Having said that, I invite my readers to spend some moments and reflect on the performance that our blind national team has shown as against the benefits or facilities they have been given vis-à-vis our regular team.

Nevertheless, Pakistan Blind Cricket Team has proven tougher than the financial or social challenges in their struggle to prove their nation and themselves. To sum-up, a quotation by George Bernard Shaw is quite fitting here: “People are always blaming their circumstances for what they are. I don’t believe in circumstances. The people who get on in this world are the people who get up and look for the circumstances they want, and, if they can’t find them, make them.” Thus, one can say that despite of countless troubles and hurdles in their way, Pakistan’s blind cricket team has found or made their own circumstances.

The writer is an analyst and is pursuing his PhD in International Relations (IR). He tweets as @mshabirawan

Mati
Mati-Ullah is the Online Editor For DND. He is the real man to handle the team around the Country and get news from them and provide to you instantly.
Share
Facebook
Twitter
Pinterest
WhatsApp
Previous articleSaad Rafique to relaunch Kohat Railcar on January 24
Next articlePeace restored in KPK, FATA: Governor