Who will no longer remain beneficiaries of BISP?

The federal government has removed more than 800,000 people from the list of eligible beneficiaries under the Benazir Income Support Programme (BISP).

The move came after the Prime Minister’s Special Assistant on Social Welfare and Poverty Alleviation Dr Sania Nishtar informed that 820,165 people who had been receiving special grants under the BISP actually do not fall into the category of ‘deserving people’, and proposed their ouster from the programme.

Eventually, the Federal Cabinet in its meeting held on December 24, 2019 under the Chairmanship of Prime Minister Imran Khan accorded the approval.

Later, Sania Nishtar thanked the Federal Cabinet on Twitter for approving her proposal, and also shared the data of 820,165 BISP beneficiaries who, she said, as per the forensic data analysis findings were found ineligible to receive the support under the programme. 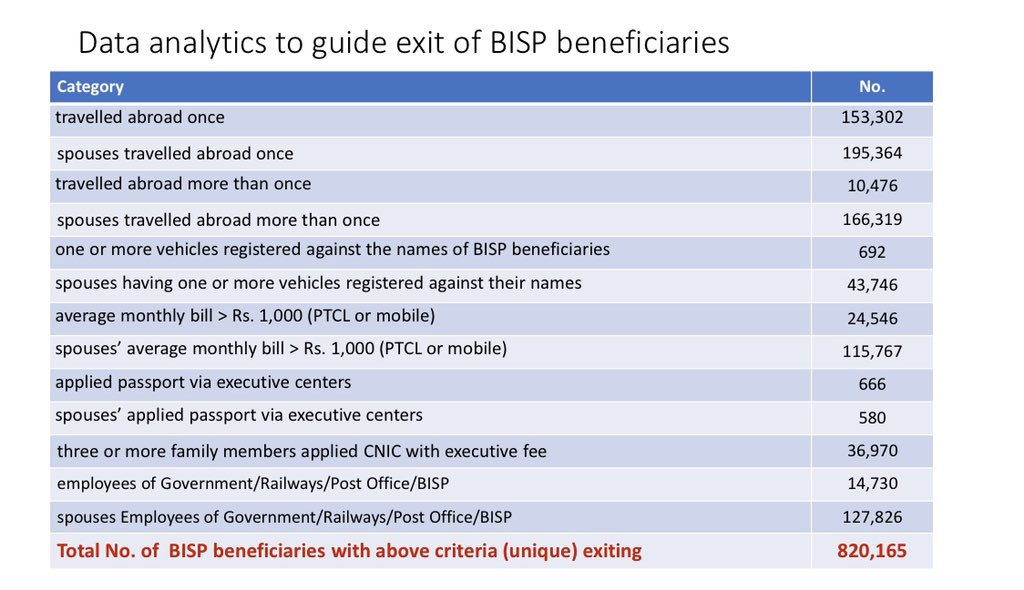 Dr Sania Nishtar further said that after the ousting of 820,165 ‘undeserving people’ from the BISP, the government will save Rs 16 billion annually.

The Special Assistant separately also said that her goal is to include only those people in the programme who truly deserve financial help.

The Benazir Income Support Programme was started in 2008 during the Pakistan People’s Party (PPP) regime to provide the financial support to the poor and backward classes, especially women, which was continued in the Pakistan Muslim League-Nawaz (PML-N) regime.

It is being alleged by some circles that the incumbent government expelled these people because they belonged to other political parties while the ruling Pakistan Tehreek-e-Insaf (PTI) workers were not benefiting from it.

Mati
Mati-Ullah is the Online Editor For DND. He is the real man to handle the team around the Country and get news from them and provide to you instantly.
Share
Facebook
Twitter
Pinterest
WhatsApp
Previous articleSaudi Foreign Minister meets PM Imran Khan and FM Qureshi
Next articleRussia’s ‘Successful Experience’ Creating a Separate Internet from the World